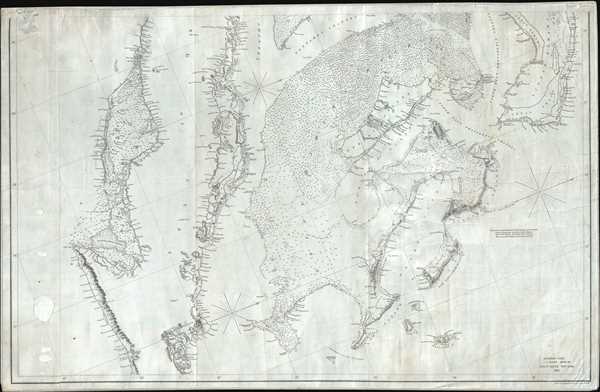 Highly detailed chart of the Bahamas and eastern Cuba.
$950.00

This is an 1844 Edmund and George William Blunt map of the Bahamas and eastern Cuba. The map depicts the Caribbean from just south of Cuba to Great Abaco, Little Abaco, and the cays to the east of Great Abaco and from the Sagua la Grande River, Cuba and Great Bahama to just east of Santiago de Cuba and Watlings Island. Numerous locations are labeled along the Cuban coast on this highly detailed chart, with a detailed depiction of the small islands and cays situated along the Cuban coastline. The islands of the Bahamas are as meticulously illustrated, with coastal locations, channels, sounds, cays, small islands and other hazards charted. Myriad depth soundings are included, particularly within the Greater Bahama Bank. A note stating the best courses across the Bank is situated on the right side of the map, just below Eleuthera Island.

This map was drawn and engraved by Charles Copley and published by Edmund and George William Blunt in New York in 1844. This chart appears to be half of a larger chart, the other half of which we have not previously encountered.

Charles Copley (fl. 1843-69), was an American nautical chart and globe publisher based in Brooklyn, New York and active in the middle part of the 19th century. He was born in England and emigrated to the United States in the 1840s. He became a citizen in 1844. Charles Copley's earliest work is associated with the firm of E. and G. W. Blunt and his name appears as cartographer or engraver on several of Blunt's c. 1840 charts – so he must have began working the Blunt shortly after immigrating. Around 1847 Copley began publishing independently and advertising himself as and engraver and map publisher. Most of his independent work was published in the 1850s.


Edmund March Blunt (June 20, 1770 - 1862) was an American navigator, bookseller, chartmaker, and cartographer based in Newburyport, Massachusetts. Blunt was born in Portsmouth, New Hampshire in 1770. In 1796, along with the nominal assistance of prominent navigator Captain Lawrence Furlong, Blunt published The American Coast Pilot, one of the most important published works on American navigation. Although much of the work was plagiarized from British publications, the Coast Pilot was an immediate popular success. In response to the popularity of his work, Blunt published 21 subsequent editions, each with important updates and revisions. The first edition to contain map plates was printed in 1804. Following a fire that destroyed his offices at The Sign of the Bible in 1811, Blunt moved his business to New York and opened a new shop, The Sign of the Quadrant. In time his sons, Edmond Jr. (1799 - 1866) and George William (1802 - 1878), took over the family business, and renamed the firm E. and G. W. Blunt and published their own nautical books, charts,and instruments, as well as their father’s. In 1830, Edmund accepted a position under Ferdinand Hassler at the United States Office of the Coast Survey. Much of Blunt's original work eventually found its way into U.S. Coast Survey Publications. Due to the quality and detail of Blunt's work, subsequent editions of his most important charts were republished well into the 1880s.

Good. Patched holes along left margin. Wear along top margin. Blank on verso.
Looking for a high-resolution scan of this?