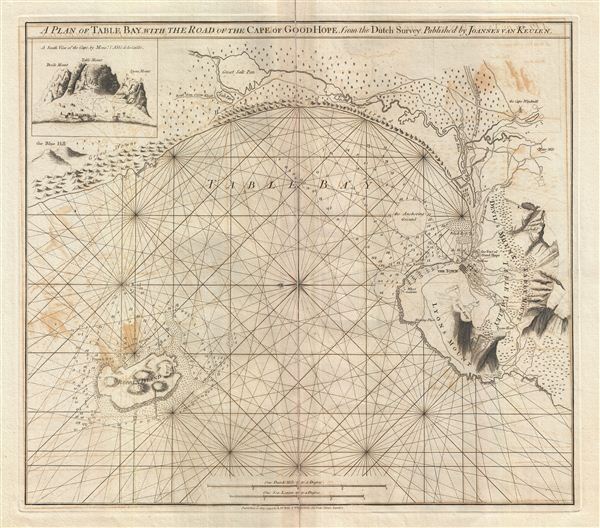 A scarce 1794 nautical chart or maritime map of the Table Bay, South Africa, by Robert Laurie and James Whittle. Oriented to the east, this stunning map of the Table Bay, South Africa, covers from Blue Hill to Table Mountain, including Cape Town, Lyons Mount, Devils Mount, Table Valley, the Great Downs, and the notorious prison Robben Island. In the upper left quadrant there is a southward looking view of Cape Town, Table Mount, Devils Mount, and Lyons Mount drawn by Abbé Nicolas Louis de Lacaille (1713 - 1762), a well-respected French astronomer based in Cape Town. Elsewhere elevation is rendered on profile.

Laurie and Whittle derived the map from Sayer, whose operation they acquired in 1787. As noted in the title, Sayer derived the map from a much earlier 17th century plan by the Dutch East India Company chart maker Johannes van Keulen (1654-1715). This reference is mostly likely to Van Keulen's c. 1700 chart Kaart van de Tafel Baay. That Laurie and Whittle, publishing more than 100 years later, could not find a better source map emphasizes the pre-Admiralty paucity of cartographic and hydrographic information available to 18th century English navigators and chart publishers, even when the subject matter is a major colony and essential port-of-call on the all-important 'round-Africa route to the East Indies. Sitting down to examine the two charts side by side reveals few updates - even the soundings, which naturally change over time, are nearly identical to the c. 1700 chart. New hydrographic surveys of Table Bay would not follow until the work of the Admiralty in the early 19th century. This map was published by Laurie and Whittle from their offices at 53 Fleet Street, London, on May 12, 1794. It was issued independently as well as offered in their 1797 East-India Pilot, or Oriental Navigator.


Johannis Van Keulen (1654 – 1715) was a Dutch cartographer active in Amsterdam during the late 17th century. Keulen was the son of Lucas van Keulen. Keulen's firm, ‘In de Gekroonde Lootsman' (In the Crowned Pilot), was founded in 1678 and registered with the Amsterdam Bookseller's guild as 'Cross staff-maker and bookseller'. The cross-staff is a nautical instrument used to determine latitude. Two years later, in 1680, they obtained a patent from the States General of Holland and West Friesland to publish nautical charts and atlases. Together with his partner, the cartographer Claes Janz Vooght, Van Keulen published numerous atlases and nautical charts, including the Zee Atlas and Nieuwe Lichtende Zee-Fakkel. This later work, the Zee-Fakkel, often called the 'Secret Atlas' as it was restricted to pilots associated with the Dutch East India Company or VOC. The term, Zee-Fakkel translates to 'Sea Torch.' It was a massive five volume atlas containing more than 130 nautical charts. The Zee-Fakkel established the Van Keulen firm as the pre-eminent maker of Dutch sea charts in the late 17th and early 18th century. In 1714, one year before Johannis Van Keulen death, his son, Gerard van Keulen (1678 - 1726), took charge. Gerard continued to update and republish the Zee-Fakkel until his own death in 1726. The firm was later passed on to Gerard's son, Johannes II Van Keulen (1704 - 1755), who significantly updated the atlas, especially with regard to Asia. The final editions of the atlas were published by Gerard Hulst van Keulen (1733 - 1801), Joannes II's son. The final true Van Keulen edition of the Zee-Fakkel was published posthumously in 1803. It is noteworthy that though ostensibly controlled by the Van Keulen men, it was the Van Keulen widows who maintained and managed the firm in the periods following their husbands' deaths. After the death of Gerard Hulst Van Keulen's son, Johannes Hulst Van Keulen, ownership of the family plates and business fell into the hands of the Swart family who continued to publish until the company closed its doors 1885, ending cartographic legacy spanning nearly 207 years.