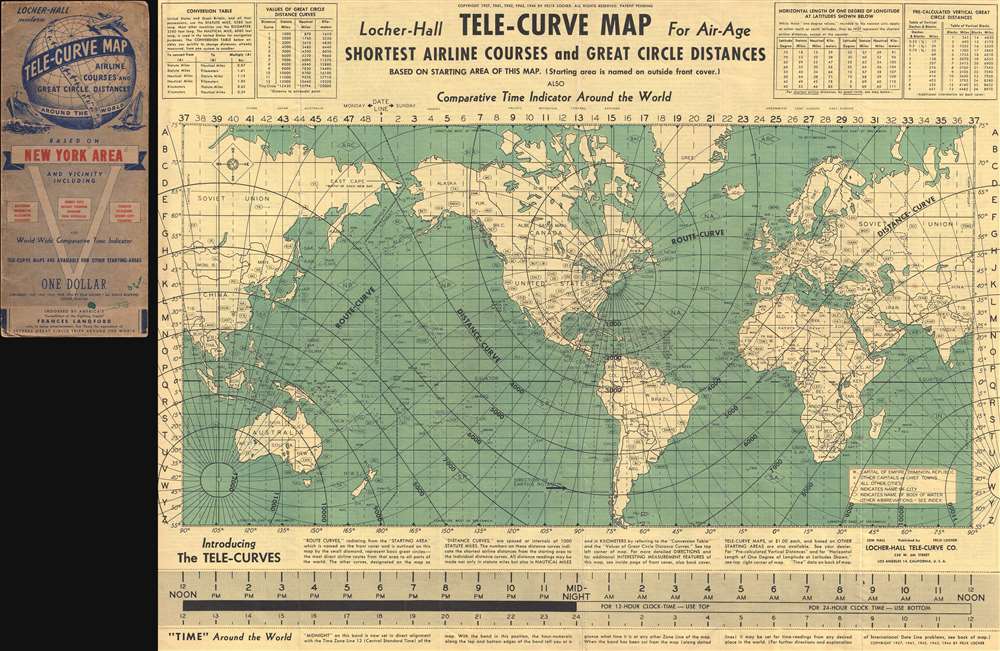 This is a 1944 Locher-Hall Telecurve map of the world. Invented by the father-son duo of Felix Locher and Jon Hall, the map depicts the world with the Americas at the center and Europe, Africa, and western Asia on the right and eastern Asia and Australia on the left. Utilizing the concept of Great Circle Routes (the shortest distance between two points on the globe), Locher and Hall integrated these new air routes with curves measuring the distances traveled. This allows viewers of their map to not only see the Great Circle Route from a certain starting point (here it is the New York City area, there were multiple different editions with different starting points), but to be able to gauge the distance traveled along one of these routes as well. Countries throughout the world are labeled and myriad cities are identified, most by two or three letter abbreviations. Locher and Hall also include time zones in an effort to help people understand how time progresses across the world. In that effort, a detachable 'time band' is printed along the bottom, meaning that, if one wanted to, they could cut it off the bottom and use it to find out what time it was in a certain city relative to where they were. Other helpful resources, including two distance conversion tables, are situated along the top border.

This map is quite rare, as we have been able to locate only one example in an institutional collection and only one other time that it has entered the private market. It was created by Felix Locher and Jon Hall and published by the Locher-Hall Tele-Curve Company in 1944.

Felix Maurice Locher (July 16, 1882 - March 13, 1969) was a Swiss inventor and actor. Born in Bern, Switzerland, Locher held over 100 copyrights and patents, all relating to a unique mapping system. Locher began working as an actor at the age of 73, when he was visiting his son, actor Jon Hall (February 23, 1915 - December 13, 1979), on a movie set. The director of the movie, Elmo Williams, convinced Locher to play the elderly Tahitian chef in the film. From there he went on to have a productive acting career, and even appeared in Star Trek. He bears the distinction of being the oldest actor ever to appear in an episode of Star Trek by birth year. Little is known about Locher's personal life.


Jon Hall (February 23, 1915 - December 13, 1979) was an American film actor and the son of inventor Felix Maurice Locher (July 16, 1882 - March 13, 1969). Born in Fresno, California, Hall (born Charles Felix Locher) was raised in Tahiti by his father. He originally planned on becoming a diplomat and was educated in England and Switzerland before a friend from Tahiti suggested he try his hand at acting instead. Hall began his acting career in the mid-1930s, appearing in several movies in uncredited roles and 'whatever jobs in pictures' he could get. His big break came when Hall got the starring role in The Hurricane, which was released in 1937. He had a long and successful career in Hollywood, appearing in over forty different movies and television series. Off screen, Hall helped develop the revolutionary Locher-Hall Telecurve map with his father, Felix Locher Hall was also an inventor in his own right and a skilled pilot. He held patents for an underwater camera, optivision lenses, and the design for the hulls of PT boats for the U.S. Navy. Hall married singer Frances Langford in 1934 and they divorced in 1955. He then twice married and divorced actress Raquel Torres.