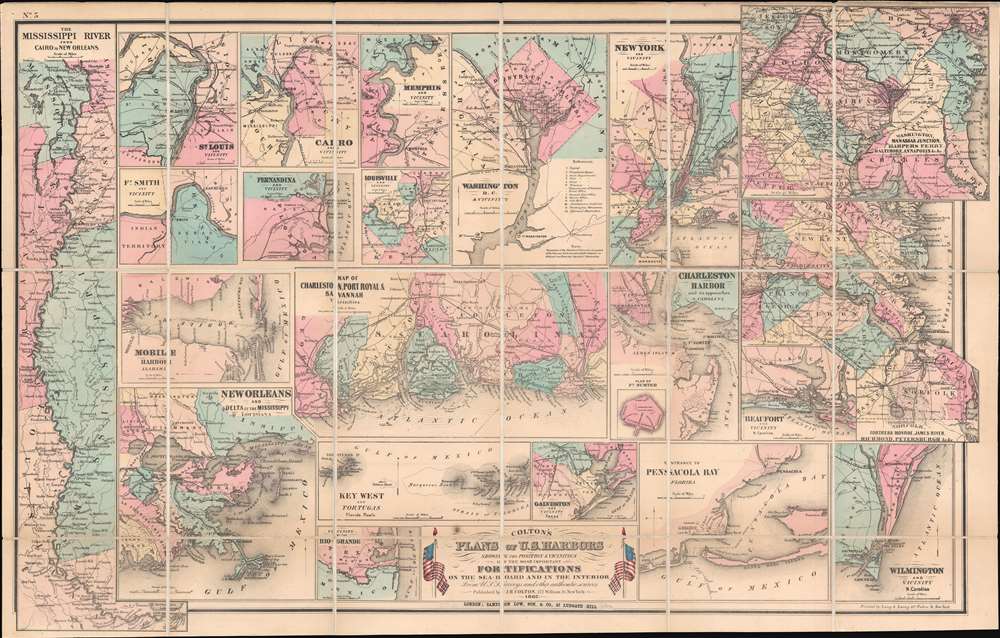 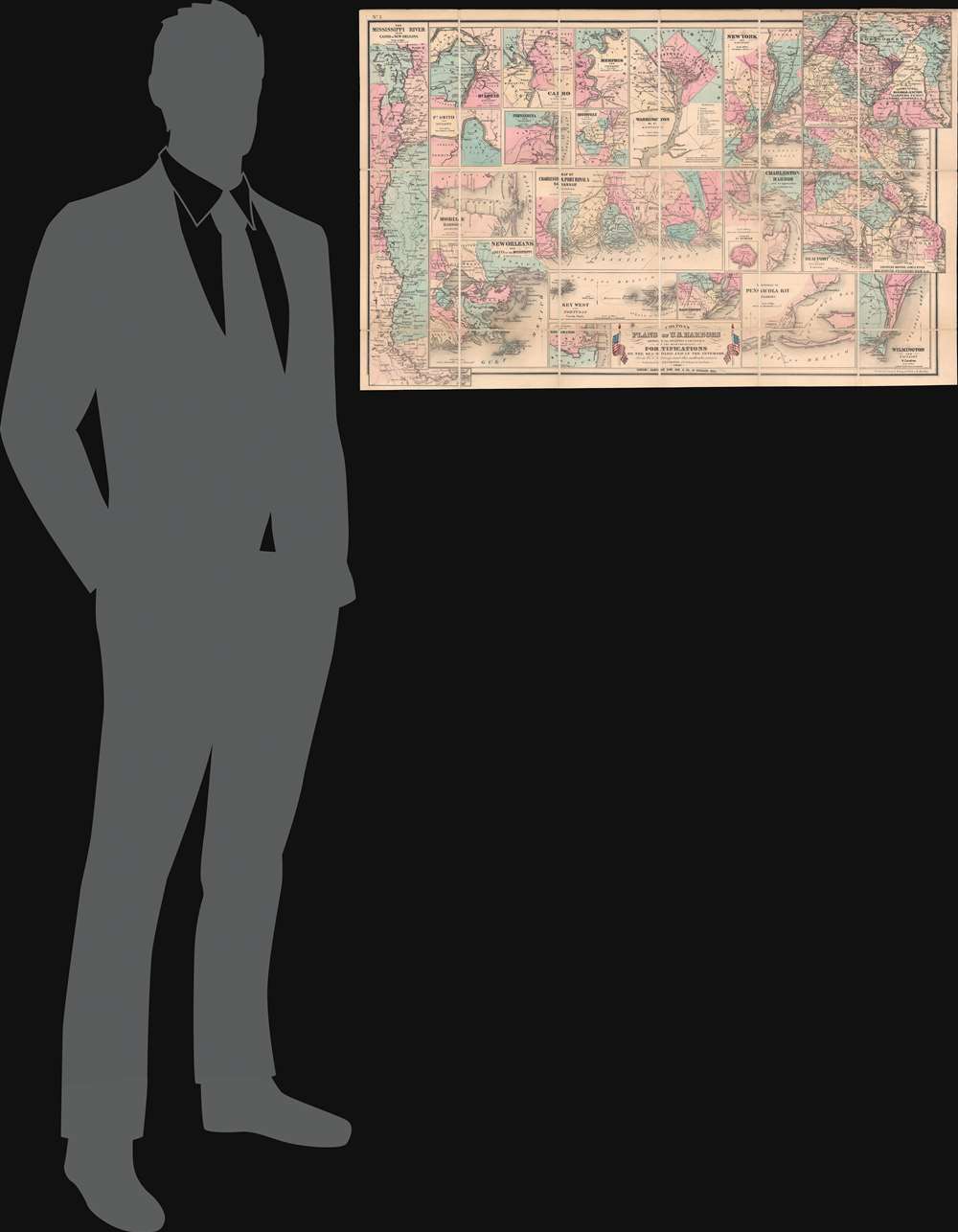 This is a separate issue 1862 J. H. Colton map of the United States focusing on its many harbors and their fortifications during the American Civil War (1861 - 1865). Twenty-one plans are printed on a single sheet. Colton highlights the most important ports in both the Union and the Confederacy. Maps highlight New York City, Washington D.C., Charleston, eastern Virginia from the Chesapeake Bay west to Richmond and Petersburg, Pensacola, Galveston, Savannah, Charleston, Mobile Bay, and New Orleans. An inset in the Charleston Harbor map details Fort Sumter, where the first shots of the American Civil War were fired.

The most important aspect of this map, given the American Civil War, is Colton's detail of Mississippi River ports. Plans of Cairo, Memphis, Louisville, and St. Louis appear on the upper left. For this edition, Colton added a map of the Mississippi River from Cairo to New Orleans, highlighting the significance of controlling the Mississippi corridor to both sides of the conflict.

Colton details the railroad networks surrounding each city and illustrates and labels railroad lines in each map. For example, the map entitled 'Norfolk, Fortress Monroe, James River, Richmond, Petersburgh, etc.' provides a detailed depiction of the network connecting Richmond, Petersburg, Suffolk, and Norfolk, and in doing so underscores the important role railroads played throughout the war.

This map was created and published by J.H. Colton in 1862 and printed by Lang and Laing in New York City. This particular example bears a pastedown over Colton's copyright stating that this example of the map was sold in London by 'Sampson Low, Son, and Company'. We have been unable to locate any other examples bearing this pastedown, but it is likely the reason this map is dissected and laid on linen - a very British predilection uncommon in mid-sized American maps. At least two editions were published. The first, published in 1861, did not include the important Mississippi River inset, which was added for this, the second edition. This map is well represented in institutional collections but is scarce on the private market.


Lang and Laing (fl. 1861 – August 16, 1862) were New York City based publishers and lithographers active in the middle part of the 19th century. The firm was founded by founded by William Lang and Joseph Laing and maintained offices at 117 Fulton Street, New York City. They specialized in transferring copper and steel plates to lithographic stone for more economical printing. Their most significant cartographic work is the Jacob de Cordova and Robert Creuzbaur map of Texas. The firm was dissolved in August of 1862. Lang went on to partered with Henry Pooley Cooper, and continued to publish under the Lang and Cooper imprint until 1864. Learn More...


Sampson Low (November 18, 1797 - April 16, 1886) was an English publisher and bookseller. Born in London, Low, the son of a printer and publisher working in Soho, held an apprenticeship with the proprietor of a circulating library and worked in the house of Longman and Company before opening his own business in 1819. Operating out of 42 Lamb's Conduit Street, Low's first business was as a bookseller and stationer with an attached circulating library. Low founded Sampson Low, Son, and Company in 1848 with his eldest son Sampson Low, Jr. on Fleet Street. The business moved to Ludgate Hill in 1852 and expanded to include an American department with the help of David Bogue. Bogue retired in 1856. That year, Edward Marston was brought on as a partner and the firm's name changed to Sampson Low, Son and Marston. After Low Jr. died in 1871, the firm's name changed again, this time to Sampson Low, Marston and Company. Low retired in 1875 and his wife Mary, with whom he had two sons, died on May 26, 1881. The firm continued until 1964. Learn More...

Very good. Dissected and mounted on linen in eighteen (18) panels.