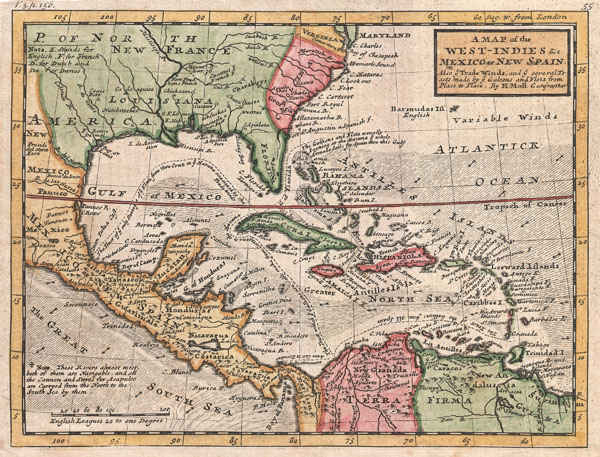 An 18th century treasure map of the West Indies and Caribbean.

This is Herman Molls small but significant c. 1732 map of the West Indies. Moll's map covers all of the West Indies, eastern Mexico, all of Central America, the Gulf of Mexico, North America as far as the Chesapeake Bay, and the northern portion of South America, commonly called the Spanish Main. Typical of Moll's style this map offers a wealth of information including ocean currents and some very interesting commentary. Additionally Moll, most likely through his acquaintance with pirates William Dampier and Woodes Rogers, offers a wealth of information on the traffic of silver bearing Spanish treasure fleets en route from the Mexican port of Veracruz, through the islands, to Spanish ports in Europe.

Following the dotted line, Moll identifies the Spanish treasure fleet's entrada into the Caribbean via the passage between Granada and Trinidad. The fleet then sailed westwards, skirting the Spanish Main until they reached Cartagena, where they rested and reprovisioned before heading northwards, rounding western Cuba and stopping in Havana. Using the strong Gulf Stream current - shown here - ships would sail northwards from Havana while being steadily forced to the southeast thus alighting at the deep water port of Veracruz. On the return, laden with silver from the mines of San Luis Potosi, the Spanish fleet took advantage of eastward blowing trade winds, which helped to overcome the strong current on the sail to Havana. From Havana they would travel northwards via the narrow passage between Florida and the Bahamas before cutting eastward and out to sea at St. Augustine. It was here, in this crucial passage between the English dominated Bahamas and Spanish Florida, where the most nefarious pirates and British Privateers lay in wait for their profitable prey.

Moll further fills this marvelous map with numerous notations that, while bearing no direct impact on piracy in the region, do offer considerable insight into his political persuasions. He identifies, for example the river route through Tabasco and Chiapas, via which supplies and cannons were transported to the important Pacific port of Acapulco.

Moll also makes some interesting choices with regard to his mapping of the French territories in North America, namely New France and Louisiana. He firstly, in a nod to La Salle's colony of St. Louis, extends French control of Louisiana westward to the present day Texas-Mexico border of the Rio del Norte or, as it is known today the Rio Grande. He also includes Florida in the French regions – a very curious anti-Spanish stance. The North American British colonies including Carolina, Virginia, Georgia and Maryland are also noted.

This map was issued in a number of different states from 1729 to about 1750. Most commoly it appeared as plate no. 55 in Herman Moll and Thomas Bowles' Atlas Minor. This particular example was also issued in volume three of Samuel Simpson's The Agreeable Historian published in London in the 1740s.

Moll, H., Atlas minor: or a new and curious set of sixty-two maps, in which are shewn all the empires, kingdoms, countries, states, in all the known parts of the earth; with their bounds, divisions, chief cities & towns, the whole composed & laid down agreable to modern history. By Herman Moll, Geographer, (Thos. and John Bowles, London) 1729 - 1736. ALSO IN: Simpson, S., The Agreeable Historian, (London) 1746.