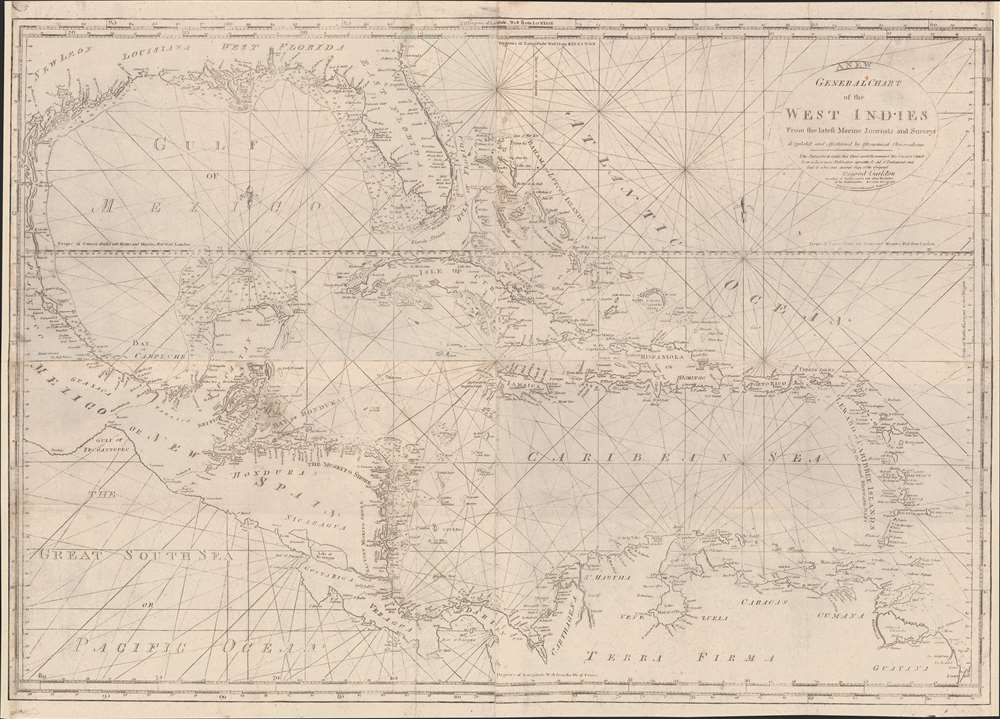 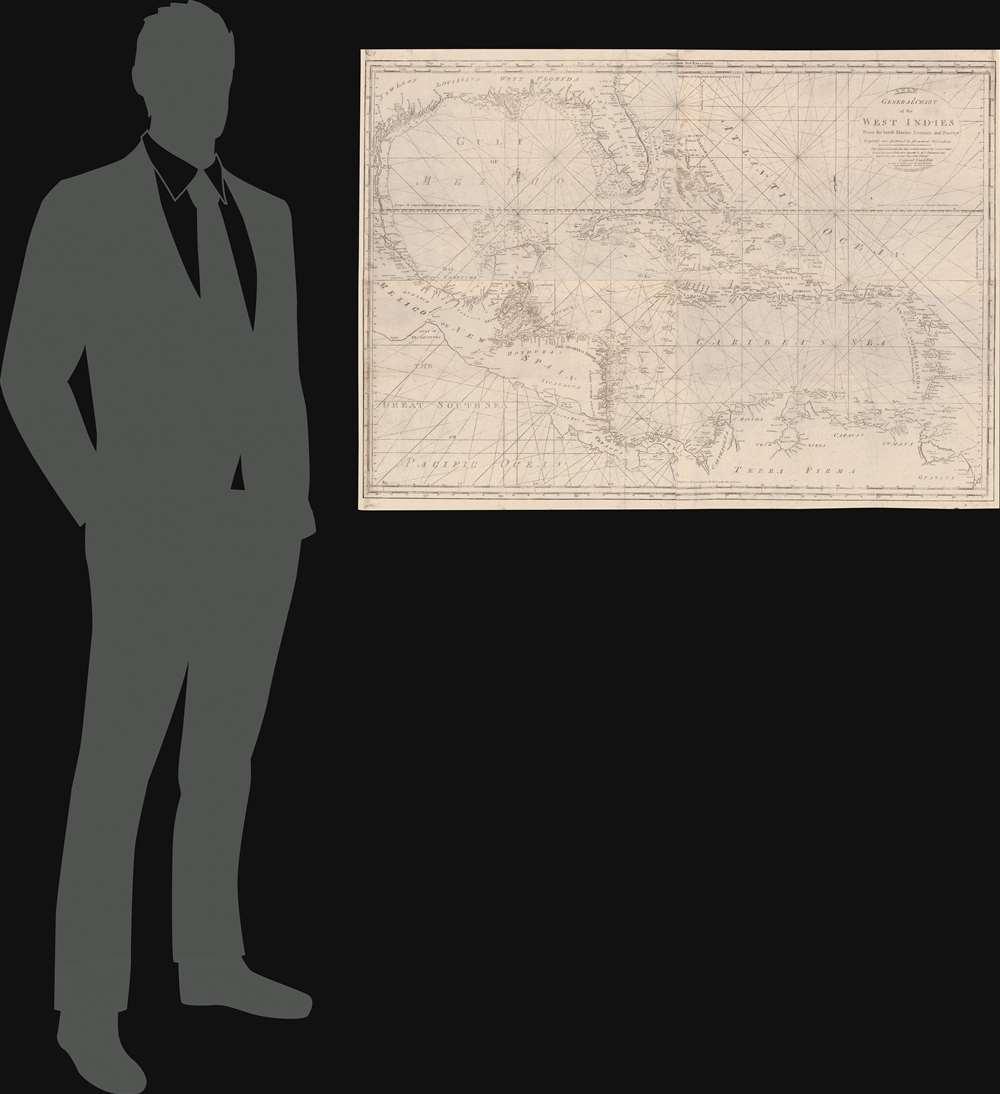 A rare and important c. 1789 - 1794 nautical chart or maritime map of the West Indies, Florida, the Bahamas, and the Gulf of Mexico littoral by Osgood Carleton and John Norman. This is the second edition of John Norman's first published nautical chart, representing one of the first instances of post-Revolutionary American commercial chart making, predating the publication of the Clark Pilot by several months.

Coverage extends from the Gulf of Mexico littoral to the Gulf of Panama, embracing Florida, all of the West Indies, including the Greater and Lesser Antilles, the Bahamas, the Yucatan, Central America, and the northern parts of South America. There are extensive and novel soundings north of the Yucatan and around Florida, particularly along the western coast of the peninsula. Although drawn, engraved, and sold by John and William Norman, the chart features a printed certification by Osgood Carleton, a well-known Boston-based expert on navigation.

The map is derived from a similar chart of the same name published in the 1780s in London by Sayer and Bennet. Although European Sea charts were the norm throughout the Revolutionary period, the United States was rapidly emerging as an economic, industrial, and seagoing power. As more engravers, papermakers, and printers established themselves in the former British Colonies, demand rose for economical domestically produced charts of the same caliber as European charts. Although Clark has been attributed as the publisher of the first American nautical atlas, it was John Norman, and later his son William Norman, who actually produced the charts and took up the challenge of supplying the American maritime trade. Their work paved the way for other American hydrographers, including Edmund Blunt, to establish their own firms.

This map was most likely engraved in 1789 by John Norman at the request of Bartholomew Burges (c. 1740 - 1807). Burges was a maritime lecturer and mathematician who on August 3, 1889, published a subscription proposal for a set of 12 nautical charts in the Boston Gazette. That proposal suggested the set would include a map of the West Indies engraved by John Norman. In his promotion, Burges boldly claimed the charts would be approved by the Boston Marine Society. Affronted, the Marine Society interviewed Burges, but refused to lend its name to the project, determining that 'Burges has produced no recommendation of his character and scientific abilities.' In his response, Burgess begged the society to examine the one chart already complete - one engraved by John Norman sometime before August of 1789. It remains unclear which chart that was. Burges was again rejected by the Marine Society.

Burges turned to Matthew Clark (1748 - 1798). Clark was not a publisher or hydrographer, but as an auctioneer and shipbuilder, had deep connections in the Marine Society. Where Burges's was rejected, Clark received approval. He made his first appeal to the Marine Society in October of 1789 and, together with the respected local chartmaker and mathematician Osgood Carleton, presented their case in January of 1790. They brought with them several charts, suggesting that Norman must have been hard at work between August, when only one chart was complete, and October, by which time 'several' were ready for presentation. Also around this time, Clark had forced Burges (and possibly Norman) from the project.

Clark proceeded to publish the Pilot and separate charts in the winter of 1890. The full complement included 18 charts, offered both separately and as a bound set. Most were engraved by Norman, with added charts by Joseph Seymour. In most, but not all, Burges' name was effaced. Burges himself relocated to New York in the Spring of 1790, where he published a notice to 'the public concerned with navigation',

[Clark] published a set of Charts of the Coast of America . . . protracted by me from materials I was furnished with, from some of the first men in the United States of America... Six or seven of which charts were engraved on copperplates, with my name cut deep thereon, in a conspicuous manner, in the title compartment of each chart; and published and delivered to the subscribers in Boston and that neighborhood last year, as a specimen of the work in order to propagate it. (New York Journal and Patriotic Register, August 24, 1790)

He simultaneously denied all association with the charts and atlas.

This chart of the West Indies bears the date of December 28, 1789, making it the earliest chart exclusively attributed to John Norman. Guthorn notes that an advertisement for it appeared in the January 1 (really 18th), 1790 issue of the Boston Gazette, offering it for sale at John Norman's shop. No map of the West Indies appeared in Clark's Pilot, despite being called for in the original Burges proposal (as noted above). We think it likely that Norman was working on this chart for Burges, before that latter fell out with Clark, and possibly Norman. Norman may have retained the plate, which he subsequently published on his own account, first as a separate map, and later in the first edition of his seminal work, The American Pilot. The first edition of this map can thus be considered Norman's first independently published nautical work.

This map was most likely engraved in December of 1789 by John Norman at the request of Bartholomew Burges (c. 1740 - 1807). It was issued independently in January of 1790 by John Norman, then later included in the 1791 11-chart American Pilot, the second sea atlas published in the United States. There are two states, the present example corresponding to the second, with the imprint charged to 'W. Norman'. This state first appeared in the 1794 second issue of the American Pilot, the first to bear the 'W. Norman' imprint. All maps from the Norman atlases are rare and significant, as are all maps attributed to Osgood Carleton. Of the atlas, few survivors known, most of which are incomplete.

John Norman (1748 - June 8, 1817) was an engraver and publisher in Boston, Massachusetts. Born in England, he apprenticed as a printer under the elder William Faden, father of the mapmaker William Faden II (1749 - 1836). Norman completed his apprenticeship in October of 1773 and shortly thereafter moved to Philadelphia. There he established himself as an engraver, publishing his first map The Theatre of War in North America in 1777. He relocated to Boston in 1781. He is best known for nautical charts, many of which represent the earliest American-produced sea charts of the areas depicted, and are consequently among the most important American printed works of the 18th century. Norman had engraved two of the charts for the first American nautical atlas (Mathew Clark’s 1790 A Complete Set of Charts of the Coast of America). The success of this venture inspired Norman to publish is own atlas in 1791, The American Pilot. This is one of the most important American atlases, and loose examples of Norman’s charts are extremely rare on the market. Norman’s work includes portraits, illustrations and architectural diagrams; he also produced maps for publication in works such as Boston Magazine and Malham’s Naval Gazetteer. He died of typhoid in 1817. His son, William Norman (17?? - 1807) began working with him and fully took over publication of the The American Pilot around 1794. Learn More...


William Norman (17?? - November 18, 1807) was an American stationer, engraver, chart and map publisher active in Boston during the late 18th and early 19th centuries. He was the son and heir of the John Norman (1748 - 1817), one of the first American commercial chart publishers. Norman's imprint first replaces his father's in 1794. He issued editions of American Pilot from 1794 through 1807, when he died suddenly. Learn More...


Osgood Carleton (June 17, 1742 - June 1816) was a Massachusetts-based mapmaker, surveyor, mathematician, philosopher, astronomer, and all-around polymath, active in the late 18th and early 19th centuries. Carleton was born in Nottingham West, New Hampshire, the eldest of 7 children. His father was a farmer and in his early years Carleton had no opportunity for formal education. He joined the colonial militia and participated in the French and Indian War (1754 - 1763). During the war, he became close to the British-Swiss engineer John Henry Bastide (1700 - 1770), under whom from age 15, he served as a clerk for 5 years - likely Carleton's formal education dates to this period. Carleton's own writings suggest he traveled extensively in British circles with Bastide. He later returned to New Hampshire, establishing himself as a surveyor, completing both civil and private contracts. During the American Revolutionary War (1775 - 1783), he joined the Massachusetts Regiment, later the 16th Continental Regiment, where he served as quartermaster with the rank of sergeant. In 1777, He was promoted to lieutenant in the 15th Continental. When his health failed, he was transferred to the Invalid Corps - where he also served as quartermaster until mustered out in 1783. After the war, Carleton settled in Haverhill, Massachusetts. In the wake of the War, education in practical sciences where in high demand and in June of 1787, the Boston Board of Selectmen approved his application to open a school offering lectures in surveying, gauging, mensuration, algebra, geometry, geography, astronomy, dialing, navigation, gunnery, architecture. Around the same time Carleton took up commercial mapmaking, partnering with the chartmaker John Norman (1748 - 1817). He was involved with the publication of Norman's c. 1790 nautical atlas of the United States - the second such atlas published domestically. Carleton also received state patronage for his cartography, issuing the first official large-scale maps of Massachusetts and Maine, as well as significant maps of Connecticut and Rhode Island. He also issued a popular almanac, Carleton's Almanac, the precursor to the still published Old Farmer's Almanac. Despite renown as a cartographer, teacher, and publisher, Carleton struggled with penury, declaring bankruptcy in 1803. After his bankruptcy, he turned fully to commercial cartography, becoming one of American's first professional cartographer. He issued various coast pilots, atlas maps, and maritime guides. Even so, when he died in 1816, his estate was calculated at a meager 33.44 USD. Learn More...

The American Pilot, containing the navigation of the sea coast of North America..., (Boston: W. Norman) 1794.