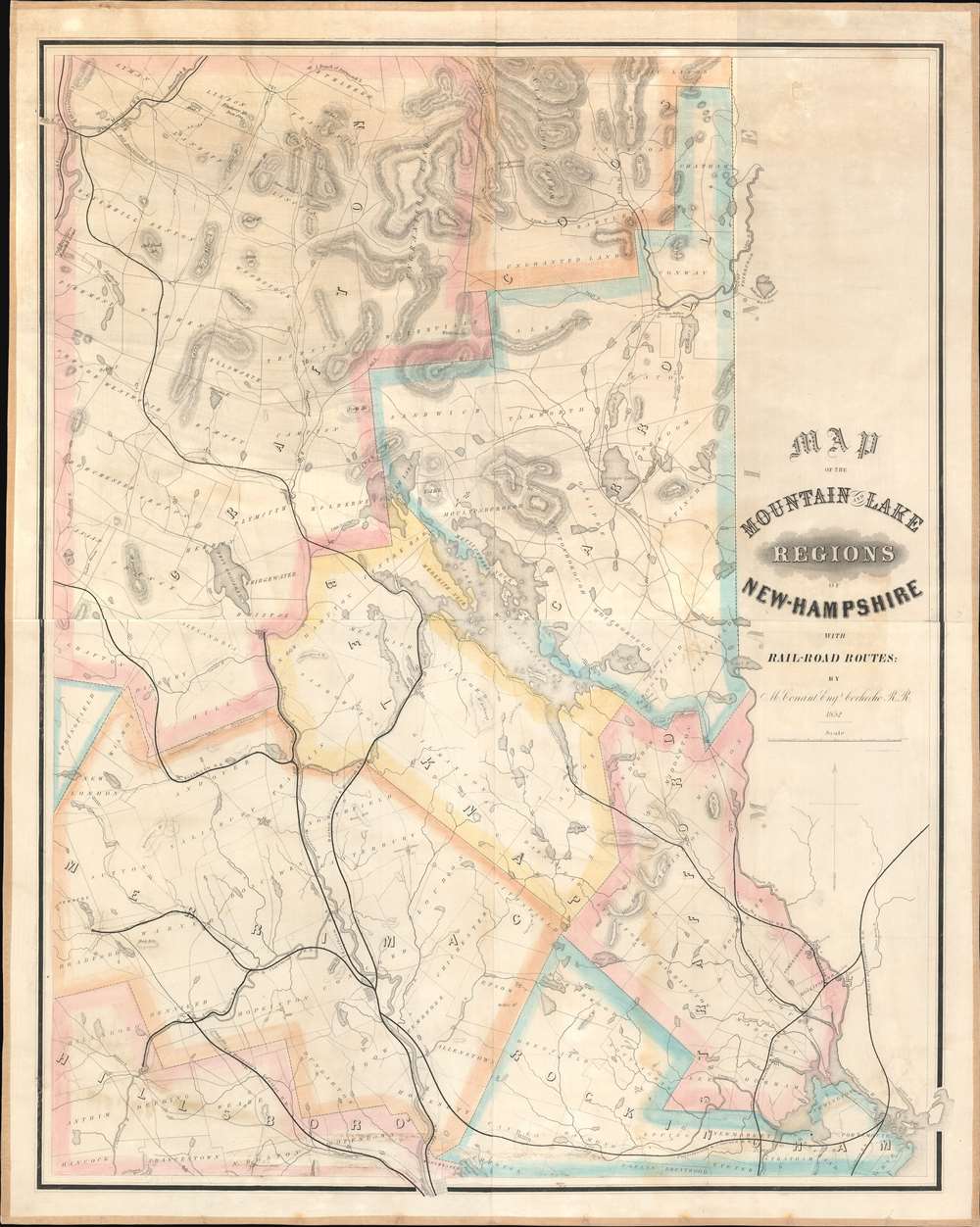 This is Marshall Conant's important 1852 wall map of the lakes and White Mountains regions of New Hampshire, likely the first specific map of the White Mountains. Depicting from Mount Washington to Portsmouth and Manchester, Conant places the map's focus on the region's railways. Likely produced to promote Conant's employer, the Cocheco Railroad, prominent black lines identify and trace railroads' routes from Portsmouth, Dover, and Manchester through the White Mountains. Conant dedicates significant effort to detailing the White Mountains, labeling numerous individual peaks. Well-known landmarks, including the Flume, the Lafayette Hotel, the Crawford House, and the Notch House, also appear.

First Map of the White Mountains

Founded in 1847 in Dover, New Hampshire, the Cocheco Railroad began as a connection between Dover and Farmington, New Hampshire. Construction began soon after the railroad's founders received their charter, and trains started operating along the line by September 1849. Not long afterward, the founders decided that they were 'overlooking an important additional market' and decided to extend the railroad to the southwest corner of Lake Winnipesaukee with a terminus at Alton Bay. This extension allowed the Cocheco access to Winnipesaukee's steamboats, which carried both passengers and freight. They hired Marshall Conant (this map's creator) to oversee the spur's 1851 - 1852 construction. A wharf and a steamboat (named the Dover) were added soon after the Cocheco reached Alton Bay. Plans were made to further extend the railroad to The Weirs or Meredith, but neither were realized. After the founding president, William Hale, left Cocheco in 1859, the railroad was renamed the 'Dover and Winnipeseogee Railroad'. In 1863, the 'Dover and Winnipeseogee' was then leased to the 'Boston and Maine Railroad'. It was bought outright by the 'Boston and Maine' in 1892.

This map was engraved and printed by Swett's Zincography. Zincography was developed in the mid-19th century and combined elements of etching and lithography. This process involved placing a sheet of paper bearing an inked image on top of a thin zinc plate. Then, acid was applied to the paper, passed through the un-inked portions of the paper, etching the image on to the plate. A resist was then applied to the plate, making it so that only areas in relief would accept ink. The plate was then used on a lithographic press to print the image.

This map was created by Marshall Conant and printed by Swett's Zincography in 1852. Two examples are cataloged in OCLC and are part of the institutional collections at Harvard College and Dartmouth College. We have also located examples at the New Hampshire Historical Society and the Leventhal Map Center at the Boston Public Library.

Marshall Conant (January 5, 1801 - February 10, 1873) was an American engineer and educator. Born in Pomfret, Vermont, Conant was educated in Vermont and apprenticed as a carpenter. During his youth, he developed an interest in mechanics and decided to become an architect and set about teaching himself the necessary skills. He began teaching in his local school district while teaching himself calculus, astronomy, and geometry at the same time. He computed both a lunar and solar eclipse at the age of twenty-four, despite his lack of formal education and equipment. He compiled an 1829 almanac in 1828 that sold 10,000 copies and taught in both Boston and Roxbury. He and his wife Roxanne moved to Hillsboro, Illinois, where Conant served as head of a new academy and his wife taught. In 1841, they returned to Massachusetts, and Conant was made the head of the topographical department of the Boston Water Works, a position he held until 1845. During his time at the Water Works, the first major water lines were constructed in Boston. In 1851, Conant became the engineer in charge of the construction of the second phase of the Cocheco Railroad. After completing this project in 1852, he moved to Bridgewater, Massachusetts, and accepted the position of superintendent of the Eagle Cotton Gin Company. Conant then became the second principal of the Bridgewater Normal School (known as Bridgewater State University today) in 1853, following the resignation of the school's first president. During his tenure, Conant greatly expanded the study of the sciences in the Normal school. He also had a massive effect on the school's library, adding books; historical, geological, and geographical maps; anatomical plates, and other scientific apparatuses. He was one of the organizers of the Bridgewater Natural History Society. He resigned as principal in 1860, having helped create an excellent professional school for the education fo teachers. Conant became the assistant to George Boutwell, the Director of the Internal Revenue Service, in 1862, and spent the next ten years in Washington, D.C. He returned to Bridgewater in 1872 in poor health, but still of sound mind, and completed a manuscript for an astronomical publication shortly before he died. Learn More...