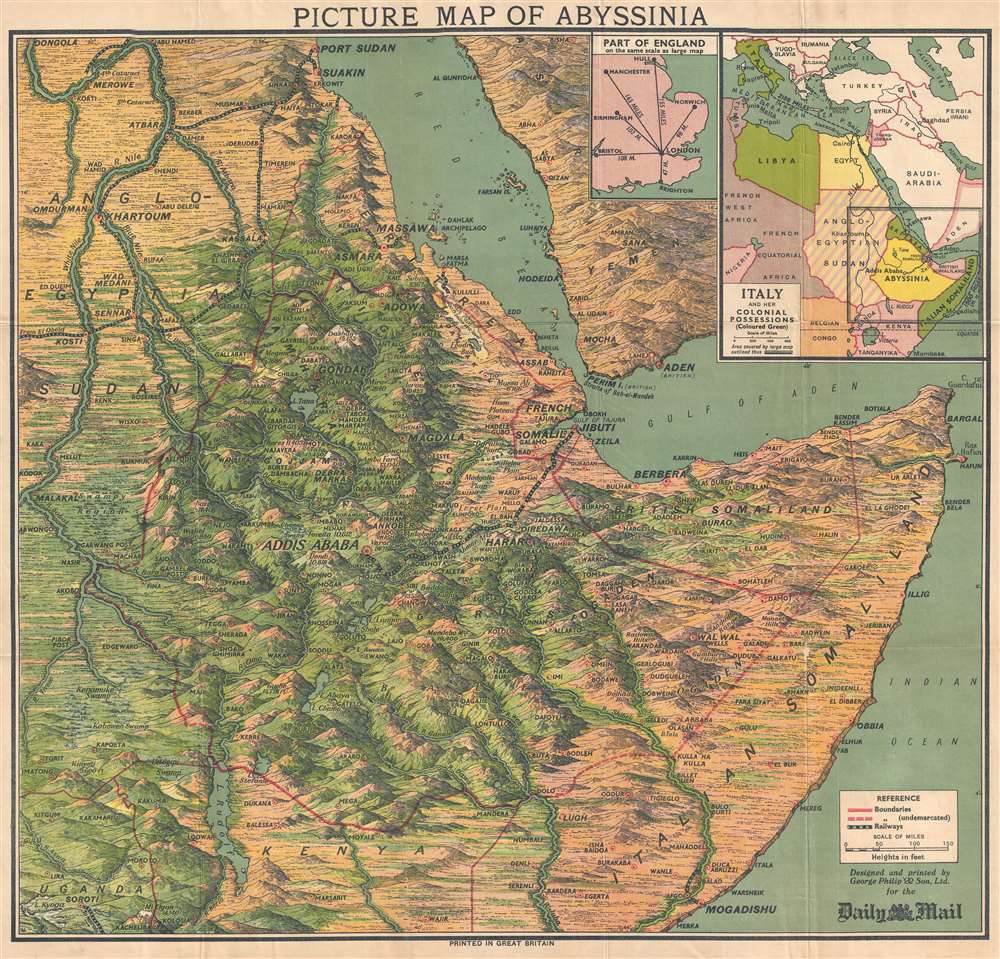 Dates from the beginning of the Second Italo-Ethiopian War.

This is a 1935 George Philip and Son pictorial map of East Africa at the outset of the Second Italo-Ethiopian War. The map depicts the region from the White Nile in Anglo-Egyptian Sudan to Cape Guardafui and from Port Sudan on the Red Sea to Uganda, Kenya, and southern Somalia, including Mogadishu. Beautifully illustrated, the region's mountainous terrain is highlighted, labeling several mountain summits, and their elevations provided. Myriad cities, towns, and other settlements throughout the region are identified, including Addis Ababa. Railroads are noted and easily identified. An inset map in the upper right corner situates the region with regard to Italy and her other African colonies. A second, smaller, inset map provides the Daily Mail's audience with some understanding of how great the distances are in East Africa by providing a map of England on the same scale.

Most of the countries identified have since been renamed, including Anglo-Egyptian Sudan, today known as Sudan and South Sudan (two separate nations), French Somalil (modern-day Djibouti), Abyssinia (Ethiopia), British Somaliland (which is an interesting case, as it is a self-declared state officially known as the Republic of Somaliland that is internationally considered to be an autonomous region of Somalia) and Italian Somaliland (Somalia).

The Second Italo-Ethiopian War lasted from October 3, 1935 until February 19, 1937 and was fought between Italy and Ethiopia. Ethiopia was defeated, annexed by Italy, and subjected to a military occupation. Ethiopian leader Haile Selassie, while in exile in England, had unsuccessfully sought aid from the Western democracies until the beginning of World War II. Following Italy's declaration of war on Britain and France in June 1940, Italian dictator Benito Mussolini launched attacks on Commonwealth forces in Egypt, Sudan, Kenya, and British Somaliland, and thus the East African campaign during World War II was opened. It would not be until May 1941 that Ethiopian troops and Selassie would reenter Addis Ababa. Even after the Italian defeat, however, the remnants of the Italian Army and their allies carried on a guerrilla war until the Armistice of Cassibile was signed in September 1943.

This map was created by the firm of George Philip and Son and published by the Daily Mail in 1935. Today this map is uncommon on the market and in institutional collections with the OCLC identifying just 5 holdings.