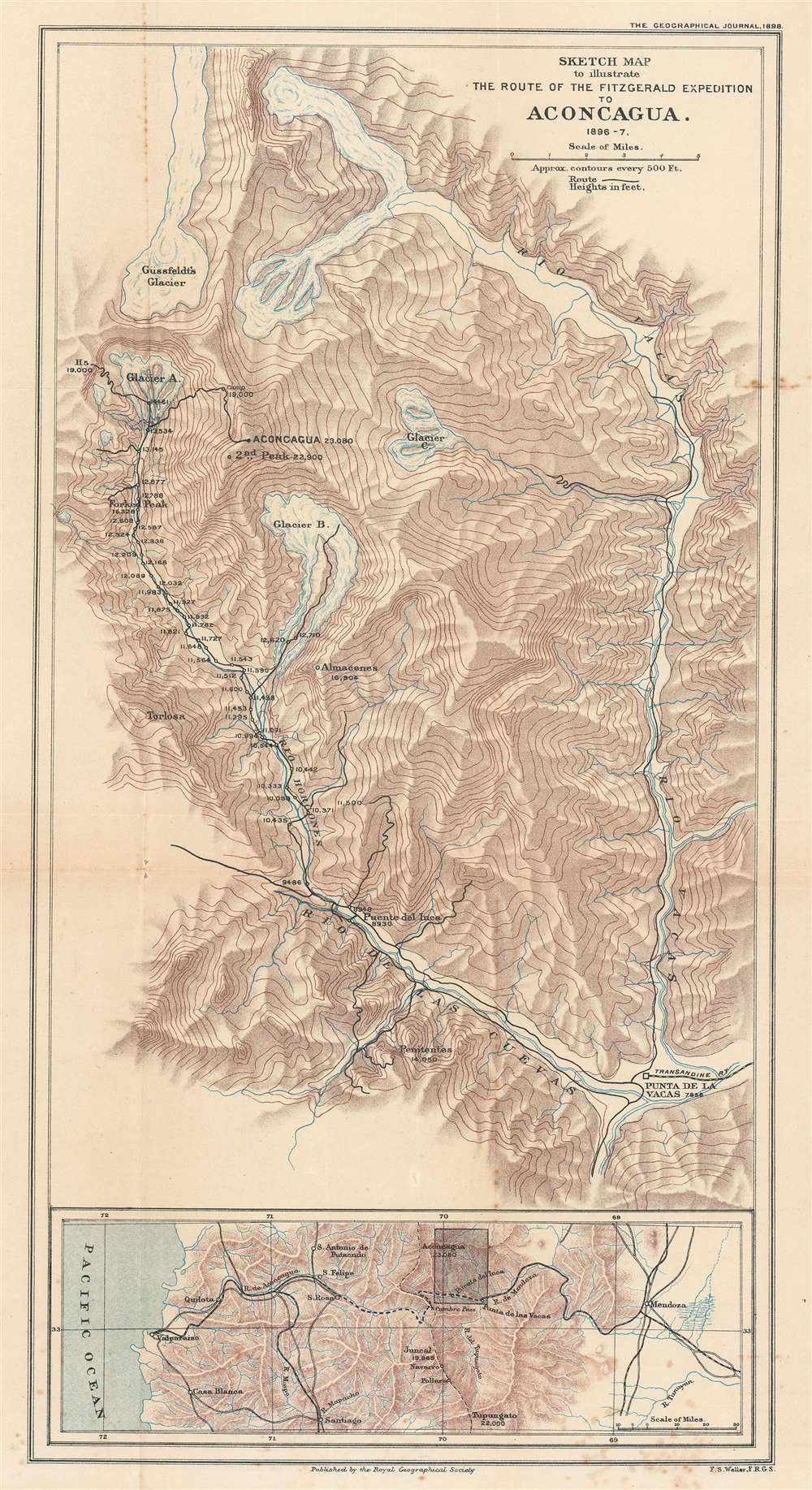 The first successful ascent of Aconcagua, the tallest mountain in America.
$700.00

This is an 1898 Francis Sidney Weller map of This is an 1898 Francis Sidney Weller map of Mount Aconcagua, Mendoza Province, Argentina. The map depicts the region around Aconcagua, principally the Horcones Valley and the Vacas Valley. Black lines trace the 1896 – 1897 expedition financed and led by Edward Fitz Gerald (FitzGerald) that made the first successful ascent of Aconcagua. Aconcagua, labeled here in large block characters, is the tallest mountain outside Asia, as such it is also the tallest mountain in the Americas and in the Western and Southern Hemispheres. The region's topography is illustrated by hachure, and the area's glaciers and other major peaks are identified. An inset map along the bottom border situates Aconcagua in the larger region, placing it between Valparaiso, Chile and Mendoza, Argentina, where Fitz Gerald's team started their ascent. The proposed Trans-Andine Railway is illustrated here as well, with black lines detailing its progress through the mountains.

Fitz Gerald and his team arrived in Buenos Aires in early November 1896, and traveled by rail to Mendoza, the last stop of the Argentine Great Western Railway. From there, they traveled to Punta de las Vacas, the last stop of the Trans-Andine Railway. Once here, they spent a few weeks reconnoitering the Vacas and Horcones Valleys to determine the most practical route to the summit. Base camp was eventually established in the Horcones Valley, and the altitudes of this camp, and the expedition's subsequent camps on their ascent of Aconcagua, are noted along the route. Five attempts at the summit were made over six weeks, with Fitz Gerald and Zurbriggen together during the ascents, but Fitz Gerald repeatedly fell ill at around 20,000 feet. Finally, Fitz Gerald sent Zurbriggen on alone, and Zurbriggen reached the summit by himself on January 14, 1897. Fitz Gerald and his team remained on the mountain's slopes for another month, but Fitz Gerald never managed to reach the summit, always falling ill at about the same altitude. However, two other members of the team, Englishman Stuart Vines and Italian guide Nicola Lanti both reached the summit on February 13, 1897.

Edward Arthur Fitz Gerald (May 10 1871 – January 2, 1931) was an American mountaineer and British soldier. 1n 1894, while traveling the Alps with Himalayan explorer Martin Conway, he befriended Matthais Zurbriggen, a Swiss guide who Fitz Gerald would employ over the next five years as a mountaineering guide. In 1894 – 1895, Fitz Gerald and Zurbriggen traveled to New Zealand, where they planned the first ascent of Mount Cook, the highest mountain in New Zealand. Local mountaineers, however, beat them, accomplishing the ascent a few days after Fitz Gerald and Zurbriggen arrived. Instead, the duo made the first ascents of Mount Sefton, Mount Sealy, Mount Silberhorn, Mount Tasman, and Mount Haidinger. In 1900, after the Aconcagua expedition, Fitz Gerald joined the Imperial Yeomanry. He was commissioned as a second lieutenant in the 5th Dragoon Guards and fought in the South African War. After the war he earned a promotion to captain in 1906 and to major in 1912. Fitz Gerald worked for the War Office from 1914 until 1919. He stopped climbing after a 1903 accident in Zermat.

This map was created by Francis Sidney Weller to accompany a paper entitled 'Exploration on and around Aconcagua' written by Edward Fitz Gerald and published by the Royal Geographical Society in the November 1898 edition of The Geographical Journal. Three examples are catalogued in the OCLC and they are part of the institutional collections at Harvard, the University of Chicago, the University of Oxford.