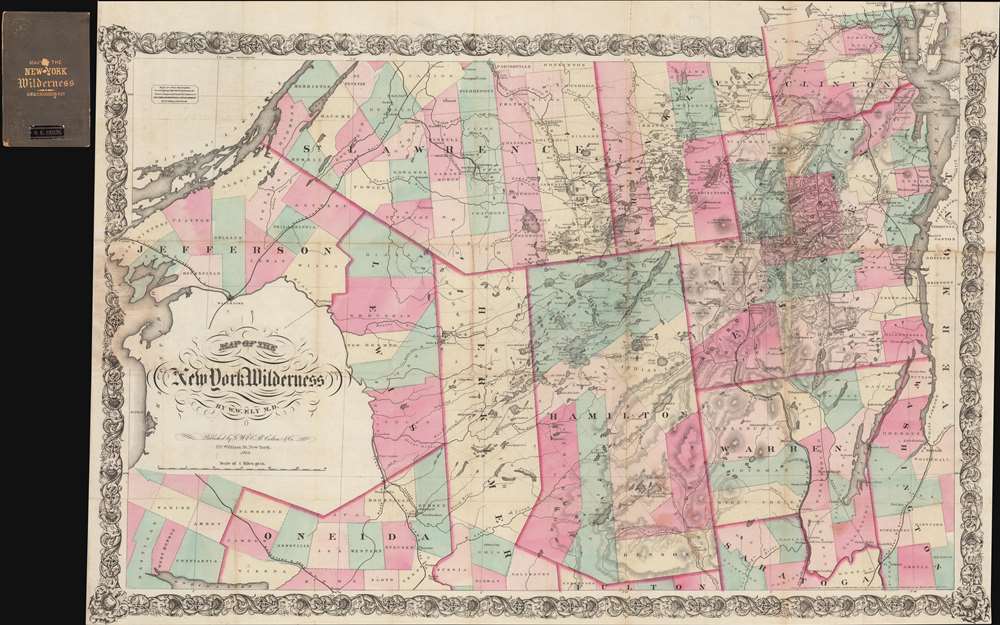 A rare 1869 edition of William Watson Ely's map of New York's Adirondack Mountains - this is the first large scale map of the Adirondacks. The map covers from the St. Lawrence River to Lake Champlain inclusive of the counties of St. Lawrence, Clinton, Essex, Hamilton, Warren, Herkimer, Jefferson, Lewis, and Oneida. The whole is surrounded by an elaborate decorative vine motif border.

With its lush wilderness, rich wildlife, and plethora of lakes and rivers, the Adirondack Mountains were a popular sporting and fishing destination for much of the 19th century. As early as the 1850s it was a favorite stomping ground for such luminaries as James Russell Lowell, Louis Agassiz, and Ralph Waldo Emerson. Nonetheless, it wasn't until 1867 that a reliable map of this region appeared. The Adirondacks' rugged rurality, lakes, mountains, and rivers proved a daunting obstacle for 19th century surveyors and cartographers.

The work of Rochester physician and enthusiastic Adirondack sportsman W.W. Ely finally opened up this region cartographically. Ely probably began working on his map around 1860, or perhaps slightly earlier. It must have been an immense undertaking, but Ely's correspondence suggested that he enjoyed the work as it combined both his love of intellectual challenge and the great outdoors. The accomplishment praised by his successor Wallace:

To Dr. W. W. Ely, as the pioneer in recording these unmapped portions, and making reasonably plain to those who should follow the devious windings of stream and trail, is due to the gratitude of thousands who have acknowledged the benefit derived from his valuable map of 'the New York Wilderness,' which, up to the present time, has been the only one worthy of name as such.

The first formal mention of his map appeared a letter to his friend Louis H. Morgan, dated August 19, 1866,

I shall not admit that the Adirondacks are behind your country I am ahead of you, for the publishers are soliciting my production - the Coltons have applied for my map and I am playing coy. They want the contribution but do not think the investment would e remunerative, but would publish, I would give it to them. I they will give me due credit for Authorship, I think I will let them have the map, but not to use for the purpose of compilation and take all the glory to themselves.

Ely must have come to some consensus with the Colton's, for the map was first published one year later 1867. Nonetheless, Ely was correct in his fears that the publishers would take all credit for the map, as later editions removed Ely's name from the cover and title.

Printed by G.W. and C. B. Colton of 172 William Street, New York. Upper left corner features an advertisement for other Colton maps. Some scholarship errenously suggests that this map was issued first in 1868, but we are aware of at least one example dated and copyrighted to 1867. A second significantly revised issued with a new copyright appeared in 1868, and a third, the present example I 1869. As the first reasonably accurate map of the Adirondacks, 'the New York Wilderness' enjoyed an immediately popularity and was subsequently published in a similar statin two subsequent editions. Around 1870 or 1871 the map was reduced to cover only the eastern Adirondack counties, updated, and reissued in a format entitled New York Wilderness and the Adirondacks..

All examples of the earlier version of Ely's map, as here, extending west as far as Jefferson County and Lake Ontario are quite rare. The OCLC cites moderate representation in institutional collections, but the map has become very scarce on the private market.

William Watson Ely (April 30, 1812 - March 27, 1879) was a Rochester, New York based physician, wilderness enthusiast, and hobbyist mapmaker. Ely was born in Fairfield, Connecticut, and studied medicine at Yale, graduating in 1834. He married shortly afterwards and established a medical practice at Manlius, Onondaga County, New York. He relocated his practice to the larger city of Rochester in 1839, where he remained for the remainder of his days. Despite his success as a doctor, Ely's is best remembered today for his remarkable mapping of the Adirondacks, completed between 1860 and 1866. His meticulous work produced the first accurate map of the Adirondacks and was the definitive map of that region for some 20 years. Ely died in Rochester of heart disease in 1879.