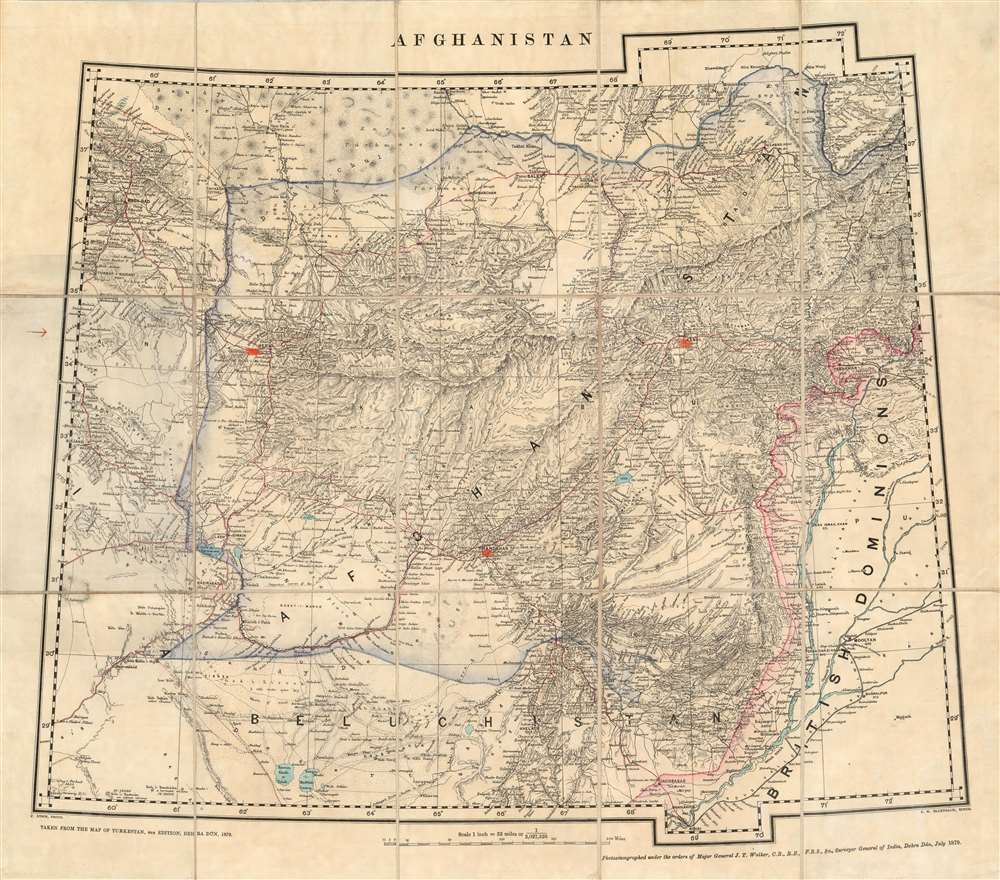 Afghanistan in the middle of the Second Anglo/Afghan War, following the Treaty of Gandamak

This is an extremely rare 1879 Survey of India map of Afghanistan, published immediately following the Treaty of Gandamak, which was presumed to be the end of the Second Anglo-Afghan War (in reality, it was a breathing space between the two phases of the conflict, which would span from 1878 to 1880. It was produced in July 1879 under the supervision of James Thomas Walker, who had become Surveyor General in 1878. The map is cartographically derived from Walker's fourth edition of the four-sheet Turkestan and the Countries between the British and Russian Dominions, but it is neither a copy of one of that map's sheets, nor a reduction of that map. Produced by the same team of mapmakers as that seminal map, this present piece focused directly on the territories affected by the recent treaty between Britain and the Emirate of Afghanistan. It was printed at the same scale as its source - thirty two miles to the inch - which implies the need for the swift and timely publication of the map outweighed any considerations of the enlargement of the map. (An 1883 map of the area produced by the same team would be printed at the scale of twenty four miles to the inch.)

The Second Anglo-Afghan War was fought between the British Raj and the Emirate of Afghanistan, which was ruled by Sher Ali Khan. Stung by the Emir's refusal to receive British diplomatic missions, Britain invaded Afghanistan in November 1878. The British/Indian invasion force of 50,000 soldiers penetrated Afghanistan at three points rendering Kabul practically undefended; Sher Ali Khan solicited, but was unable to muster aid from Russia; he would die in February of 1879. On May 26, 1879, Sher Ali Khan's son and successor, Mohammad Yaqub Khan signed the Treaty of Gandamak, negotiated by Pierre Louis Napoleon Cavagnari on behalf of the British. The treaty stipulated that the Afghans admit a British representative to Kabul, which post was conferred on Cavagnari. He took up his residence in Kabul in July of 1879. Neither the residence nor the peace would last: On September 3, Cavagnari and his mission were killed in an uprising in the city, precipitating a second British campaign.

The second campaign began with the October 6, 1879 defeat of the Afghan Army at Charasiab by a Kabul Field Force under Sir Frederick Roberts. Roberts occupied Kabul two days later. Mohamme Yaqub Khan was forced to abdicate, and, after some indecision, the British installed his cousin Abdur Rahman Khan as a puppet emir. Enraged, Ayub Khan, Yaqub's brother, led a revolt in Herat and defeated a British detachment at the July 1880 Battle of Maiwand, then proceeded to besiege Kandahar. In response, Roberts led the main British force out of Kabul and defeated Ayub Khan at the September 1 Battle of Kandahar, officially ending the war.

The map was printed by the Survey of India in July of 1879 concurrently with Cavagnari's installment in Kabul, the photozincograph being copied from the relevant areas of the Survey's most up-to-date mapping of the region (the fourth edition of their Turkestan map). The hand color highlights the borders of Afghanistan and British India (in blue and red, respectively) according to the Treaty of Gandamak, and key connecting roads are marked in red. Further manuscript highlighting marks have been added to the map, highlighting not only Kabul but also Kandahar and Herat, flashpoints in the second stage of the war: so this map, produced following the treaty of Gandamak, appears to have been used for reference and notated during and after the conclusion of this chapter of The Great Game.

'The Great Game' was a diplomatic confrontation between the British and Russian Empires over Afghanistan and other territories in Central and Southern Asia. The conflict, rooted in long-standing animosity between Russia and Britain, revolved around Afghanistan, which, while lacking significant resources, was strategically situated. For its part, Russia feared Britain was making commercial and military inroads into Central Asia, an area that had long fallen within the sphere of St. Petersburg. Britain, conversely, feared Russian incursions into India, 'the jewel in the crown' of British Asia. The escalating tensions led to several wars and proxy wars: The First Anglo-Afghan War (1839 - 1842), the First Anglo-Sikh War (1845 - 1846), the Second Anglo-Sikh War (1848 - 1849), and the Second Anglo-Afghan War (1878 - 1880), along with the Russian annexations of Khiva, Bukhara, and Kokand. Then as now, Afghanistan proved a grinding stone on which the great empires of the world diminished themselves, none achieving a definitive victory while wasting massive resources. The Great Game ended on September 10, 1895 with the signing of the Pamir Boundary Commission Protocols, which stabilized the border between Afghanistan and the Russian Empire.

Despite being printed by the photozincographic process, which was both economical and able to produce many copies, this map appears not to have been produced in large numbers; it has certainly not survived in such. There are no copies of this map catalogued in OCLC, and we have not seen other copies in auction records or dealers' catalogues.


James Thomas Walker CB FRS (December 1, 1826 – February 16, 1896) was an Anglo-Indian Surveyor General of India. He was born at Cannanore, the son of John Walker of the Madras civil service and educated in Wales and at the military college of the East India Company. He was commissioned as a second lieutenant in the Bombay Engineers and served in a number of campaigns in the Second Anglo-Sikh War. From 1849 to 1853 he took part in a reconnaissance of the frontier of Peshawar, and served as field-engineer during the Indian mutiny in 1857, during which his exploits (destroying the gates of a fortress, setting off gunpowder charges with his musket, for example) earned him his promotion to captain. Following the mutiny he resumed work on the Indus survey, before being appointed to the Great Trigonometrical Survey in 1860. In March 1861 he would become superintendent of the Survey, completing his surveys with astounding accuracy, and undertaking revisions of earlier surveys to increase precision. In 1878 he became Surveyor General of India, retiring at the rank of lieutenant-general in 1883. Among his achievements as Surveyor General was his remarkable openness to the trade of geographical data with the Russians, at the height of Britain's 'Great Game' rivalry with that empire. As a token of this cooperation, Walker - already a fellow of the Royal Geographical Society since 1859 - would be made a member of the Russian Geographical Society in 1868. Learn More...

Very good condition. Dissected and mounted on linen as issued, with original covers. Photozincograph with original hand color. Some creasing of panels near folds, else excellent condition.
Looking for a high-resolution scan of this?