1827 Vandermaelen map of Afghanistan and the Hindu Kush 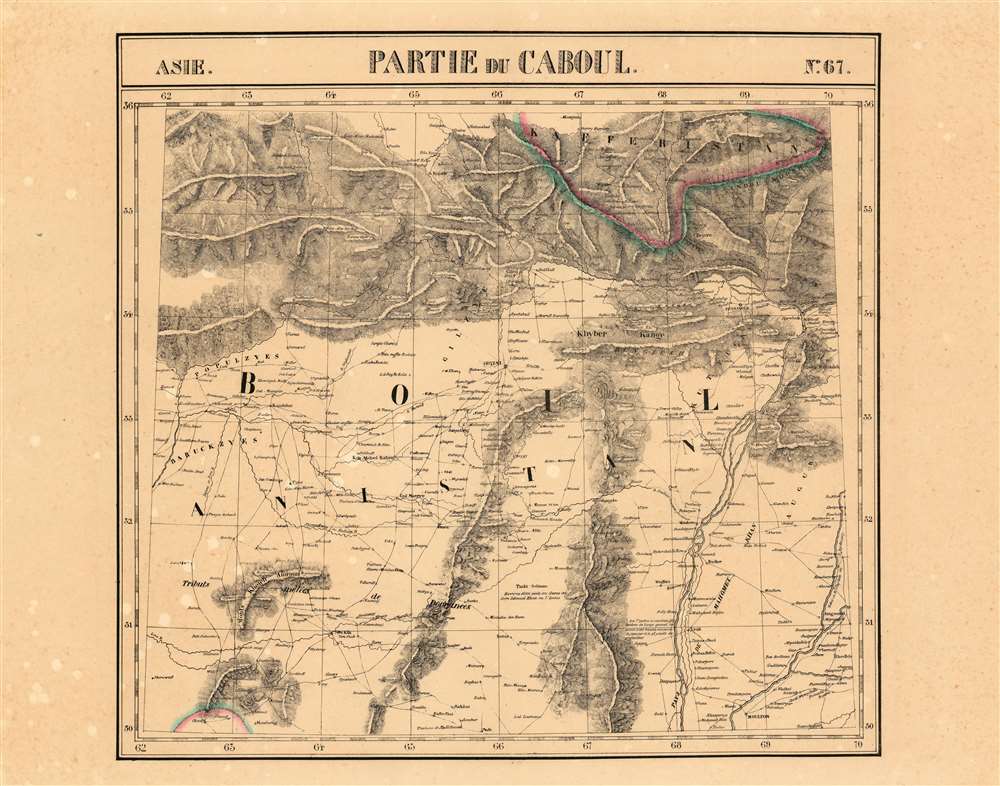 1827 Vandermaelen map of Afghanistan and the Hindu Kush

This is the 1827 Vandermaelen map of the Afghanistan, Pakistan and the Hindu Kush. It is the first large-scale atlas map to focus on the area, and the first to be executed in lithography. The map's detail - drawn from the first-hand exploration of John Macdonald Kinneir on behalf of the British East India Company - would not be improved upon until the First Anglo-Afghan War.

The Theatre of the Anglo-Afghan War

This mountainous region of Afghanistan would prove to be the focal point of 'The Disaster in Afghanistan.' All the major cities where actions occurred are shown, with the roads connecting them well detailed: Quetta, Kandahar, Ghazni, Cabul and Jalalabad all are shown along with the neighboring villages, passes, and roads. The Indus River Valley is shown with numerous cities in Pakistan, including Peshawar and Multan (Moulton on the map.) No earlier map focuses so narrowly on this region with comparable detail.

European explorers, diplomats and historians alike were baffled by the multiplicity of Afghan tribes, to the great detriment of their efforts to exploit the region. Kinneir, exploring the region for the East India Company and distressed at the expansion of Russian influence so close to the British sphere in India, recorded many of these and the data is preserved here on Vandermaelen's map. The principal power in the region at the time of the Afghan war - the Durrani tribe - are represented here by their mixed tributaries (Tributs Melees de Dooranees).The Ghilji tribe, now considered the most powerful of the Pashtuns, are shown as well (Gilzye on the map.) Other tribes named include the Populzyes, Barakzai (Baruckzyes and Bungeesh.

The map shows a territory, along the course of the Indus River, marked 'Pays de Mahomet Khan'. This refers to Dost Mohammed Khan, who in 1826 would become Emir of Afghanistan, and would be the principal ruler of Afghanistan during the First Anglo-Afghan War. THe base of his power is apparent throughout this map. His father had been chief of the Barakzai tribe, and had been a civil servant under the Durrani dynasty. This map shows the positions of the most powerful tribal forces in the region just prior to the advent of 'The Great Game.'

Rumsey 2212.000 No physical copies in OCLC.
Looking for a high-resolution scan of this?