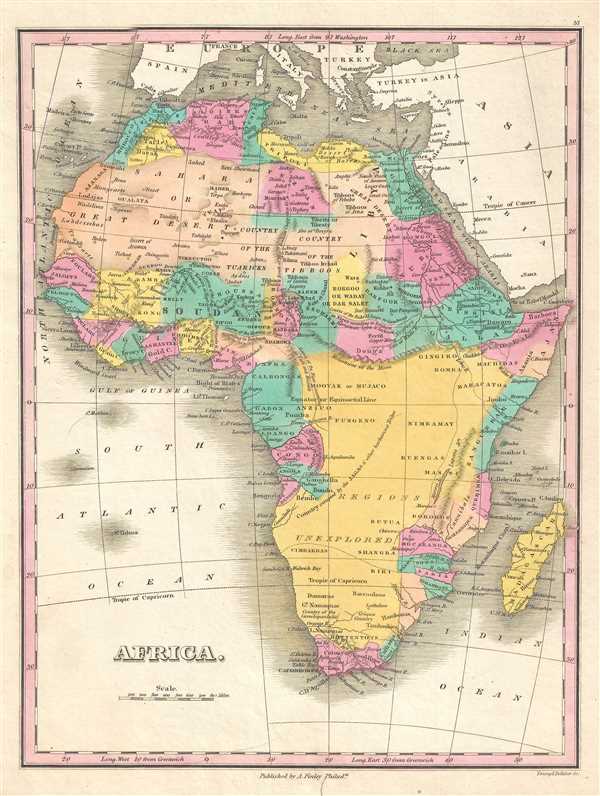 A beautiful map of Africa predating the mid-19th century explosion of expeditions to explore the 'Dark Continent'.

This is an 1828 Anthony Finley map of Africa that predates the mid-19th century explosion of European exploration of Africa. The map depicts the entire continent from the Atlantic Ocean to the Horn of Africa and from continental Europe to the Cape of Good Hope. As is common with maps of Africa, large regions of the continent are left blank, known only for being 'unexplored'. Also, speculative cartography is prevalent. The Ptolemaic Mountains of the Moon are drawn stretching across the central part of Africa, with the suggestion that they are the source of several branches of the Nile. The Niger River is not immune to speculation either, with several possible courses for the river illustrated here, including one where the Niger joins the Nile, another that depicts the Niger flowing south from the Mountains of the Moon into the Congo, and even a third, which, correctly, bends southwards to empty into the Bight of Biafra. Numerous African tribes are identified throughout the map, including the Pomba, Jaga, Tbook, Tuareg, Tibboos, and Bambara. This, of course, is not an exhaustive list. An area in Mozambique is also labeled as being inhabited by cannibals.