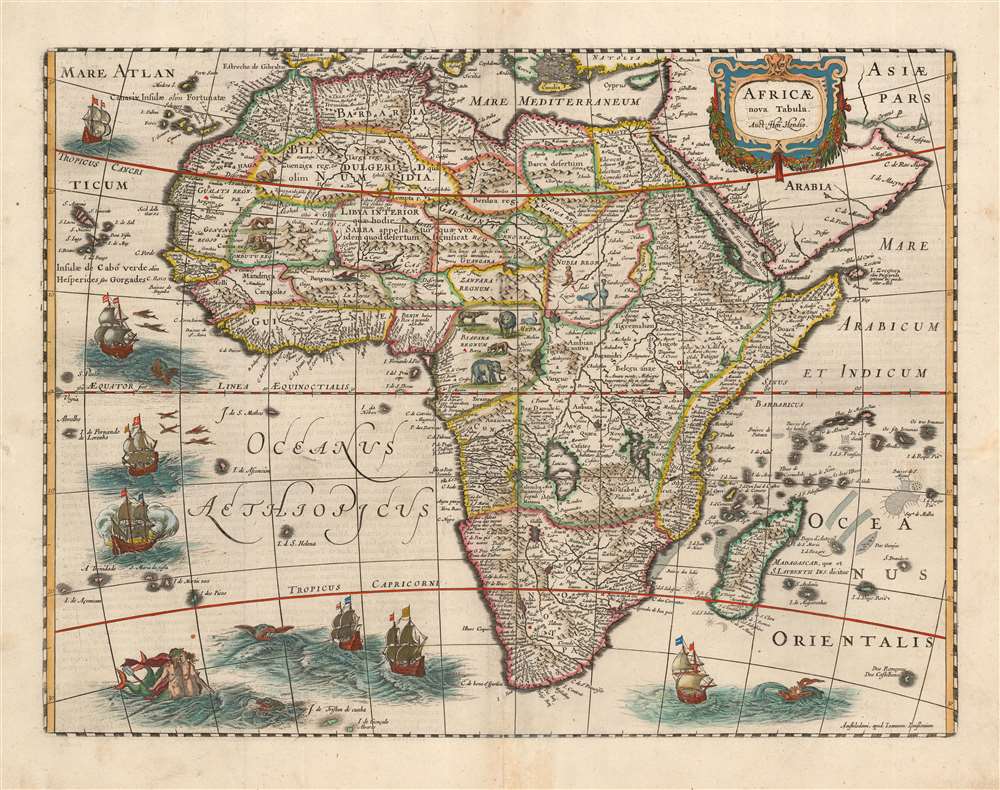 This is an attractive example of the Hondius map of Africa. It is a classic of Dutch decorative cartography. The map is embellished with lions, zebras, elephants, ostriches and monkeys, while the oceans display seven sailing ships menaced by sea monsters. Flying fish skim the waters west of Guinea. A merman and mermaid embrace in the southern Atlantic - a recurring image in Hondius' maps (the identical couple appears in at least one other, Hondius' 1631 map of Italy.)

A Long-Lived and Influential Work

This map was originally engraved in 1619 by Jodocus Hondius Jr. as part of a set of four continent maps, and would appear in his brother Henricus Hondius' atlases starting in 1631. It replaced the map engraved by the elder Jodocus Hondius in 1606 - the earlier map had been based largely on the work of Gerard Mercator. Hondius' new map was derived from the 1617 Blaeu folio as well as the 1608 Blaeu wall map of Africa, but it was in turn widely copied: Bertius, Tavernier, Boisseau and Berey all produced maps based upon this map.

Hondius's cartography follows Blaeu's folio map both in terms of detail and execution: a wise choice emphasizing clarity and sharpness, presenting detail without sacrificing legibility. The coastline, in particular, is rich in toponomy and the overall shape of the continent is remarkably accurate. Points within the continent, nonetheless, reveal the European ignorance of Africa's interior that would maintain until well into the 19th century. The Nile, for example, is illustrated with its sources in the lakes of Zaire and Zaflan, an assumption inherited from no less venerable an authority than the 2nd century Alexandrian geographer Claudius Ptolemy. The equally fictitious Lake Sachaf, derived from Laurent Fries' 1522 geography, appears in southern Africa feeding the Zambere River, flowing to the Rio de Spirito Santo. The Cuama River is shown north of the Rio de Spirito Santo, but unlike earlier maps - including the 1608 Blaeu wall map - the Cuama is given its own source, instead of sharing a source at Lake Sachaf. The Niger River is shown running, essentially, in the wrong direction: it is shown emptying into the Senegal river, after having flowed from an supposed Lake Niger (a misunderstanding of the Niger inland delta) in the general vicinity of what is now the Central African Republic. (The detailed mapping of the Niger River would not be complete until the 1890s.)

This is the fifth state of Jodocus and Henricus Hondius' map. It was initially engraved in 1619; starting at the third state of 1631 it would be included in the majority of the Hondius / Janssonius atlases. This particular example appeared in the 1666 edition of the Atlas Contractus. Thirteen examples of the separate map, in various editions but not this one, are catalogued in institutional collections. The 1666 Atlas Contractus is catalogued only in the Sachsische Landesbibliothek, Staatsbibliothek Zu Berlin, and the ULB Sachsen Anhalt Zentrale.

Betz, R., The Mapping of Africa A Cartobibliography of Printed Maps of the African Continent to 1700, 58.3. Norwich, O. I., Norwich's Maps of Africa: An Illustrated and Annotated Cartobibliography, 34. Van der Krogt, P. C. J., Koeman's Atlantes Neerlandici, (3 Vols), 8600: 1D.4.
Looking for a high-resolution scan of this?