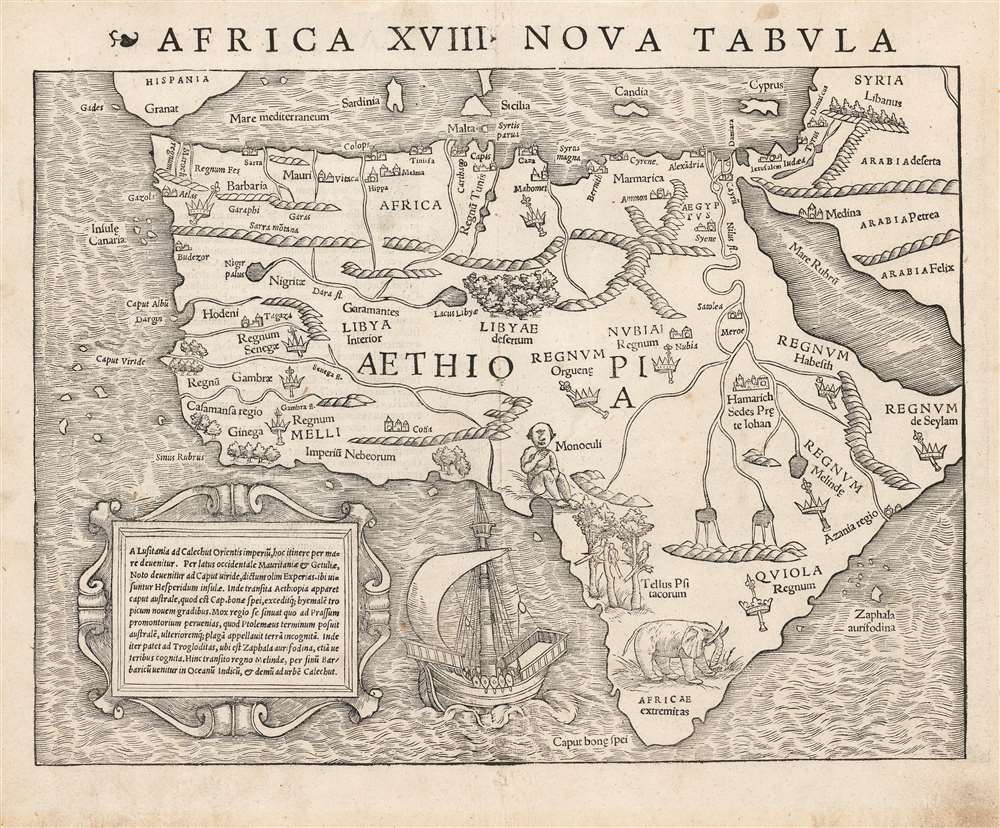 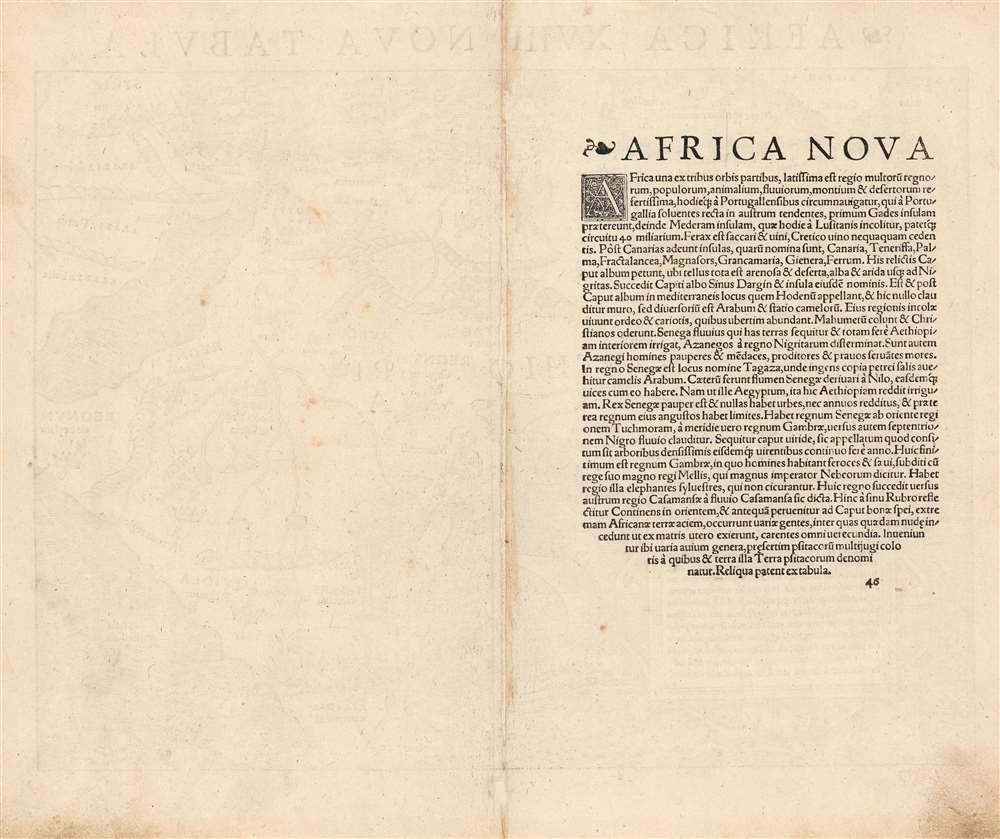 This is the rare 1540 first edition of Sebastian Münster's map of Africa, the earliest detailed map of the continent available to the collector, here in its earliest state. As is to be expected for an early printing strike, the image is bold, sharp and clear. This attractive and evocative map was broadly influential: for more than thirty years during the age of discovery, this map would be the predominant representation of Africa available to the European reader.

Within its generally-recognizable depiction of the continent, this map presents an amalgam of sources. Most of the general detail of North Africa is derived from Ptolemaic geography, as is the course of the Nile with its sources in the lakes of the Mountains of the Moon (Ptolemy's assumptions about the sources of that river would remain unchallenged on maps of Africa until the end of the 17th century.) Many place names in North Africa were likely drawn from Leo Africanus' 1526 Descrittione dell 'Africa, though many - for example, Garamantes - are drawn from classical historians such as Herodotus. Münster draws on Portuguese sources for west Africa (Cadamosto's 15th century journeys there would reveal the Cape Verde Islands, which appear here.). Numerous kingdoms are noted throughout and are marked by a crown and scepter. Some of these include the Arab kingdoms of Melinde and Quiola, Meroë, where the Nubian kings are said to be buried, and Hamarich, the capital of the kingdom of the mythical Christian king Prester John.

Of the early maps of Africa, Münster's is the most entertaining, with its decorative elements such as parrots, an elephant, and a giant Cyclops. The grand ship shown sailing near the Cape of Good Hope does more than decorate: it reinforces the news that those waters were navigable, a reality not reflected in Ptolemy's mapping of the world until scholars began revising the 2nd century geographers' work at the end of the 15th century. By the time atlases such as Ortelius' began entering publication, Münster's groundbreaking map would be obsolete. One result of this is that despite its broad reach, the map was not copied by other mapmakers, making it visually unique - and an utterly essential map for the collector of maps of the discovery period in general, and Africa in particular.

This map was printed for the first 1540 edition of Münster's Geographia. Only the 1540 and 1542 issues were titled 'Africa XVIII Nova Tabula.' The typesetting of the 1540 is unique: in the text box of the recto, the last two lines of text begin with 't' and 'b' respectively; this is not the case with the 1542. The verso text is also typeset differently: the second line of text on the 1540 ends 'regno/'; the slash is not present on the 1542. With further typographical changes, the map remained in each edition of Geographia, of which the 1552 was the last. The map was also included in all editions of Munster's Cosmographia until 1578, after which the double-page maps of the long-lived work were replaced and updated. While editions of Geographia are well represented in institutional collections, OCLC lists twenty seven copies dated 1540. The number of confirmed first editions, however, is likely to be lower, judging by the imprecision with which these institutional copies are catalogued. Only two examples of this 1540 state of the separate map are catalogued in OCLC, in the Bayerische Staatsbibliothek and the Universitatsbibliothek Eichstatt.

Münster, Sebastian Geographia Universalis, (Basel: Petri) 1540.     Following in the footsteps of Martin Waldseemuller and Lorent Fries before him, Sebastian Munster edited and published a modernized version of Claudius Ptolemy's Geographia. This appeared in six Latin editions in 1540, 1541, 1542, 1545, 1551 and 1552. According to Karrow, Munster based the text on the Latin translation of Willibald Pirkheimer, but he carefully collated it with previous editions, adding notes of his own. The first three editions contained 48 maps, consisting of 27 based on Ptolemy's ancient geography, and 21 maps based on modern geographical knowledge. The latter three editions contained 54 maps, comprised of the same ancient works but with six of the modern maps discarded, and twelve new ones added. For the collector, the modern maps are of sharpest interest. Some were based on Waldseemuller's geography, but many were based on Munster's own surveys and those of other European geographers whose assistance Munster had been able to enlist. Most of these would be reprised in Munster's magnum opus, Cosmographia Universalis. A disproportionate number of Munster's modern maps show contemporary geographical knowledge of the their respective areas for the very first time: The first map to show the continents of the Western Hemisphere; the first map to focus on the continent of Asia; the first modern map to name the Pacific Ocean. Even in cases where earlier maps exist, Munster's works very often remain the earliest such acquirable by the collector.

Very good. Some marginal soiling, one reinforcement to bottom centerfold away from image, else excellent.