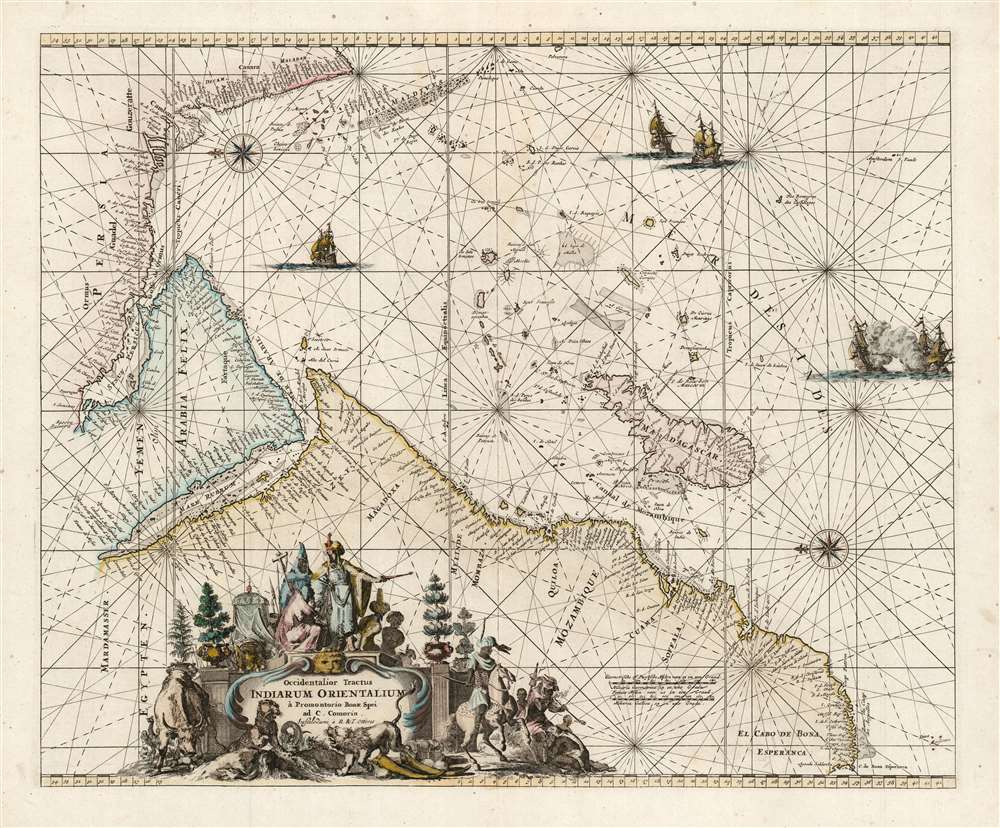 A magnificent chart of the western Indian Ocean, with masterful decorative engraving.
$1,100.00

This is Frederic De Wit's map of Africa, Arabia and part of India, in a handsome example of its scarce 1745 edition printed by Renier and Joshua Ottens. Presented as a nautical chart replete with compass roses and rhumb lines, the engraving is oriented to the east and focuses exclusively on coastal information, islands and navigational detail. The chart presents the coastline from Africa's Cape of Good Hope to India's Cape Comorin, including the whole of the Arabian Peninsula, the Red Sea, and the Persian Gulf. Madagascar and a fan of islands stretching to the Maldives are exceptionally well-detailed, emphasizing the navigability of the Indian Ocean directly without recourse to hugging the coast: a key detail for the European prospective traveler, who would consider this chart a step along the way to the East Indies.

A Masterwork of Etching

Despite its limited utility as a working nautical atlas, De Wit's Zee Atlas experienced a remarkable printing history. One contributing factor for its longevity is its beauty, greatly enhanced on many of its charts by the bravura etching of Romeyn De Hooghe - one of Amsterdam's finest portraitists and engravers. De Wit's chart is embellished with five of De Hooghe's sailing ships, two of which are locked in battle. The cartouche's decoration is a superb specimen of the master's work, meant to emphasize the exoticism of the lands depicted. In the foreground piled with elephant tusks and other trade goods, a lion roars at a leopard, which rears with a giant serpentine monster pinned under a paw. A water buffalo and an exotic bird look on from the left. To the right rides an Arab horseman near an animal-headdress wearing figure smoking a pipe - possibly opium. Atop the cartouche, a figure in European ecclesiastical robes kneels before a turbaned figure in finery decorated with a cross: a representation of Prester John, the mythical leader of a long-sought-for Christian empire thought to be in Eastern Africa.

The chart first appeared in De Wit’s 1675 Zee Atlas, reprinted by Renard in the early 18th century and again by Ottens in 1745. Sixteen entries for the various editions of this chart are listed in OCLC, but only one of these is the 1745 edition, kept in the Biblioteca Nacional de Espana. The Ottens issues of these maps were often bound in composite atlases rather than in a standard edition of the Atlas de la Navigation, which may account for this issue's scarcity.


Joachim Ottens (1663 - 1719) and his sons Renier (? - 1750) and Joshua (? - 1765) Ottens were prominent Dutch booksellers and map publishers from about 1680 to 1790. Joachim, the founder of the firm, was initially employed as a copperplate engraver by Frederick de Wit. In 1711 Joachim founded his own firm. Though Joachim died only a few years later, his sons Renier and Joshua took over the firm and presided over its most prolific period. The Ottens family's most notable contribution to cartography were its enormous made-to-order multi-volume atlases such as the Atlas Major. Some examples of the Atlas are compiled from over 800 separately issued maps. Learn More...


Romeyn de Hooghe (Septemer 10, 1645 – June 10, 1708) was a Dutch engraver, portrait artist, caricaturist, painter, and sculptor active in Amsterdam during the second half of the 17th century and opening years of the 18th century. De Hooghe was born in Amsterdam and revealed an early talent for all forms of visual arts. He became known caricaturist and is admired today as one of the first great graphic satirists. During his life he was criticized for his proclivity towards humorous tongue-in-cheek subjects. He nonetheless developed a following and produced a prolific amount of work, some 5000 engravings. He was a member of the Confrerie Pictura in 1662 and 1683. Cartographically he is best known for his decorative border work. His disciples were Filibert Bouttats (1654-after 1731), Filibertus Bouttats (1635–1707), Frans Decker, François Harrewijn, Jacobus Harrewijn, Aernout Naghtegael, Laurens Scherm, and Adriaen Schoonebeek. De Hooghe died in Haarlem on June 10, 1708. Much of his work continued to be republished posthumously. Learn More...