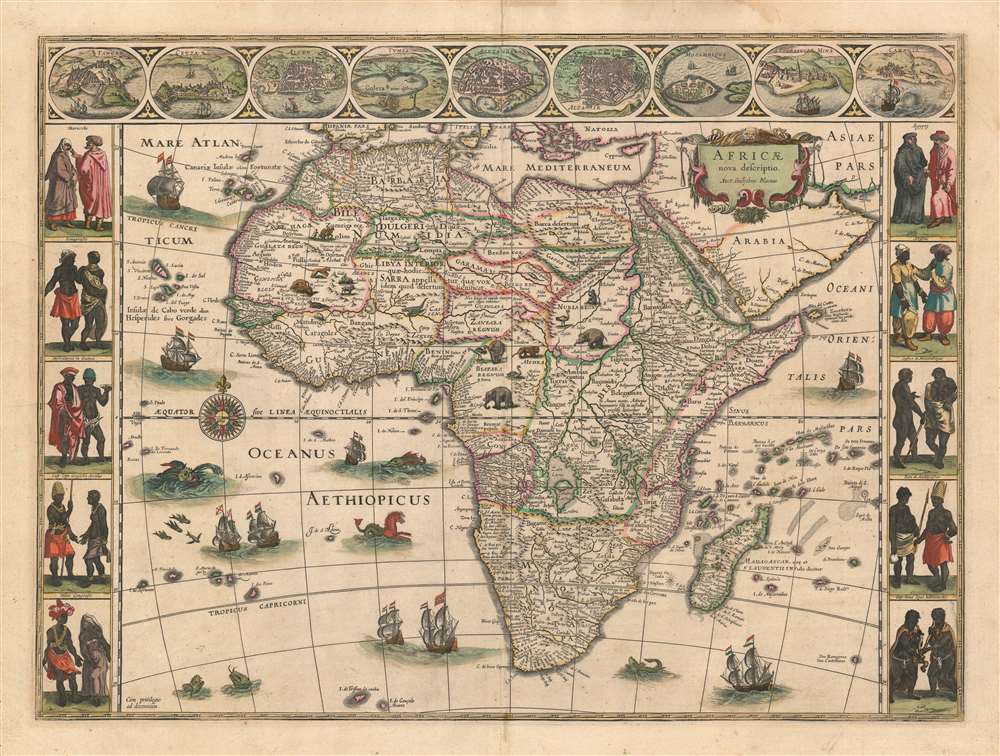 This is a lovely, original-color example of Willem Blaeu's atlas map of Africa. It is one of the most desirable maps of the Dutch Golden Age of mapmaking. Norwich hailed it rightly as 'one of the most decorative and popular of all the early maps of Africa.' The seas are filled with ships and sea monsters; the land teems with elephants, ostriches, lions, and other beasts. And the borders of this superb carte à figure map depict the greatest African cities of the day along the top, while on each side the borders display the natives of ten parts of the continent, in their traditional dress. Although separated from Europe only by the Mediterranean Sea, Europeans were nearly as ignorant of this massive continent as they were of the remote portions of Asia, or of the Americas, so maps such as this one provided a glimpse into what amounted to a different world.

Blaeu's map is essentially a reduced version of his own 1608 wall map of the continent, which would provide the standard for virtually all mapping of Africa until the late 17th century. Blaeu's atlas map here, first engraved in 1617, is particularly prized for its clarity and sharpness, presenting copious detail (and its many decorative features) without sacrificing legibility. The coastline, in particular, is rich in toponomy and the overall shape of the continent is remarkably accurate. Points within the continent, nonetheless, reveal the European ignorance of Africa's interior that would maintain until well into the 19th century. The Nile, for example, is illustrated with its sources in the lakes of Zaire and Zaflan, an assumption inherited from no less venerable an authority than the 2nd century Alexandrian Claudius Ptolemy. The equally fictitious Lake Sachaf, derived from Laurent Fries' 1522 geography, appears in southern Africa feeding the Zambere River, flowing to the Rio de Spirito Santo. The Cuama River is shown north of the Rio de Spirito Santo, but unlike earlier maps - including Blaeu's own wall map - the Cuama is given its own source, instead of sharing a source at Lake Sachaf. The Niger River is shown running, essentially, in the wrong direction: it is shown emptying into the Senegal river, after having flowed from an imagined Lake Niger in the general vicinity of what is now the Central African Republic. (The detailed mapping of the Niger River would not be complete until the 1890s.)

Along the top border of the map are nine medallions containing views of African cities of importance. Tanger (Tangiers) in northwestern Morocco; The city of Ceuta in Northern Africa (now Spanish, then Portuguese) Alger (Algiers) and Tunis; Alexandria; and Cairo. All six of these are coastal cities of North Africa and were from classical times within the European orbit. The remaining three cities represented - Mozambique, St. Georges de la Mina, and Canaria (Tenerife, in the Canary Islands) all reflect the growing reach of Europe during the age of discovery: all were important ports for the circumnavigation of the African continent, with Portuguese forts established by the time this map was published. Of these, the castle de la Mina is notorious as a staging area in the transatlantic slave trade. Most of the views show remote fortress towns, in contrast to the sprawling ancient cities of Alexandria and Cairo. Blaeu's source for these views was the Braun and Hogenberg Civitates Orbis Terrarum, the first printed 'city atlas' or collection of city plans and views from all over the explored world.

During the Dutch Golden Age of mapmaking in the first half of the 17th century, maps' decorative elements reached a height that would be alluded to but seldom matched in later periods of cartography. 'Cartes à Figures,' that is to say maps with human figures in decorative borders, were at the pinnacle of Dutch decorative cartography. These decorations were not without purpose. Atlas maps of the day were not meant to guide the prospective traveler, but were intended to inform the literate layperson what the rest of the world was like. The upper decorative border of this map with its city plans and views communicates how the denizens of Africa live: the border decoration on the left and right are meant to show what the denizens of Africa look and dress like. Typically, these pair a man and a woman for each region. Blaeu's Africa features Moroccans, Egyptians, Senegalese, Abyssinians, Guinean merchants, Mozambicans, a couple from Cape Lopez in Gabon, a royal couple from Madagascar, a Congolese soldier and his wife, and a fearsome portrayal of the denizens of the Cape of Good Hope.

Cartes à figures were deluxe productions and seldom produced for narrow, regional maps save in scarce separate issues, and not all mapmakers included them in regular atlases. Willem Blaeu's world and continental maps are considered classics of the form.

This map was first engraved in 1617 and offered as a separate issue. Starting in 1630, the map was added to Blaeu's atlases in which it would remain until the end of the company's existence in 1672. No printings of the map later than this are known, indicating that the copperplate was among those destroyed in the great fire that finished the company. The third state of this map (of which this is an example) began to appear in Blaeu's Atlas Novusin about 1647; the verso typography of ours puts it in a French edition of the atlas, which ran between 1645 and 1650. The map and its atlas are well represented in institutional collections in its many editions. Examples with original color of this quality and condition have grown scarce.

Blaeu, W., La Theatre du Monde ou Nouvel Atlas, (Amsterdam, 1645-50).     The classic Dutch atlas, whose publication ushered in the Dutch golden age of cartography. Willem Jansz Blaeu had been, since 1604, producing engraved maps for sale; these were separate issues (and all consequently extremely rare) until the publishing of Blaeu's Appendix in 1630 and 1631, which also included a number of maps purchased from the widow of Jodocus Hondius, (for example his famous iteration of John Smith's map of Virginia.) In 1634, he announced his intention to produce a new world atlas in two volumes, entitled Theatrum Orbis Terrarum, sive Atlas Novus (in an effort to invoke the successful work of the same title produced by Ortelius the previous century, while reinforcing the notion of it being a new work.) This work was published first in German in 1634, followed by Latin, Dutch and French editions in 1635. Blaeu's maps have always been noted for the quality of their paper, engraving and fine coloring, and this was the intent from the very start. The 1634 announcement of the upcoming work described it: 'All editions on very fine paper, completely renewed with newly engraved copperplates and new, comprehensive descriptions.' (van der Krogt, p,43) Many of the most beautiful and desirable maps available to the modern collector were printed and bound in Blaeu's atlases. Willem's son, Joan, would go on to add further volumes to the Atlas Novus, concurrently printing new editions of the first two volumes with additional maps, in effect making these new editions an entirely new book. Under Joan there would be nine Latin editions, twelve French, at least seven Dutch, and two German. This exceedingly successful work would be the mainstay of the Blaeu firm until 1661, at which point the work was supplanted by Joan Blaeu's masterwork Atlas Maior in 1662.