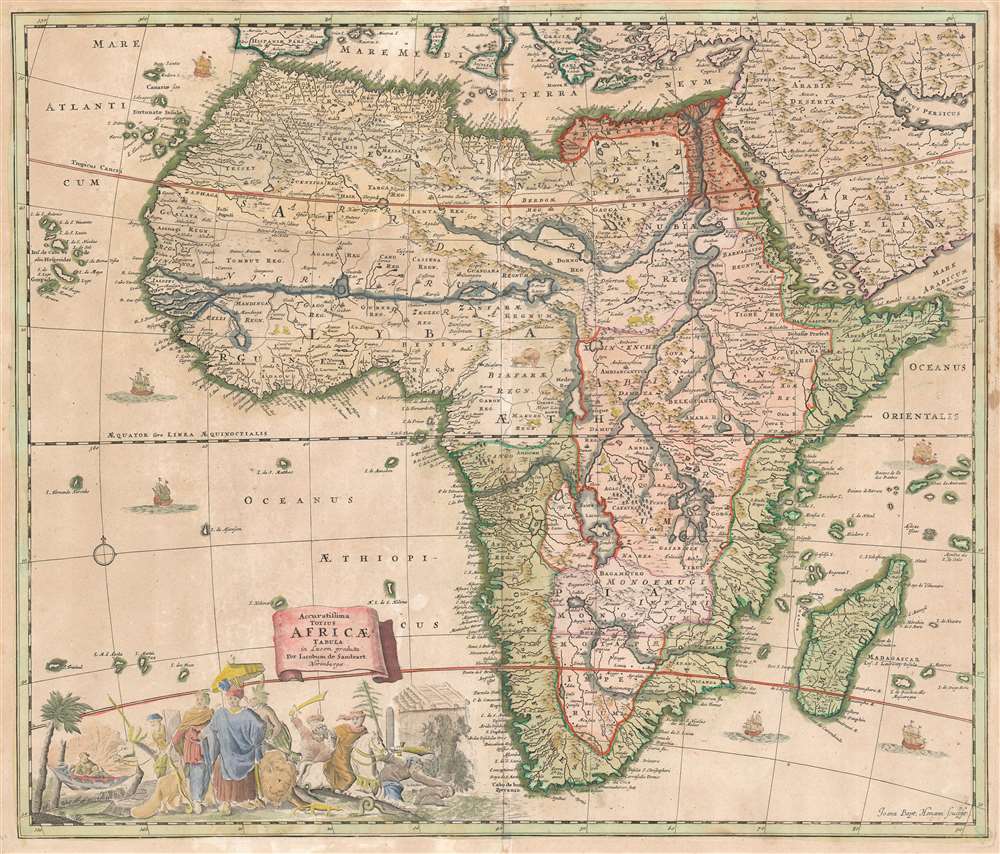 A richly detailed debut work by one of the most prolific German mapmakers of the early 18th Century.

This is Jacob Sandrart's scarce, separately published 1697 map of Africa. While cartographically derived from the influential 1670 Totius Africae Accuratissima Tabula by Frederic de Wit, this map is notable for being the first or second signed engraving by Johann Baptist Homann, who would become one of the most important German map publishers of the 18th century. (The other contender is Sandrart's map of the Americas, similarly derived from the work of De Wit.) These maps' production in 1697 just preceded the opening of Homann's own shop, in 1702.

This map follows many of the typical conventions of the period, derived from Frederic De Wit's 1670 map of the continent. The map consequently reveals a contrast between a strong understanding of Africa's coastal region with a deep ignorance of the interior. On the west coast of the continent several Dutch trading stations, including Fort Nassau and Acara, are noted. In the Atlantic, here identified as the Oceanus Aethiopicus, the island of Nuestra I. de Santa Helena, a common feature of contemporaneous French maps by Sanson and others, is identified.

Following De Wit, the Nile follows the Ptolemaic model drawing its waters from two great lakes in the southern part of the continent, Zembre (Lake Zaire) and Zaflan.

While the body of the map is derivative, the cartouche is a completely unique work, perhaps revealing the self-taught engraver's youthful proclivities as much as his considerable gifts. The foreground shows tribal leaders arrayed in opulent splendor, while lounging with a lion and what appears to be a fat tailed sheep, while snakes and lizards scurry about. Meanwhile, scimitar-bearing warriors astride Arabian steeds in the background ride down a captive in order to take his head. One rider brandishes a severed head. For the European, the exotic was not merely exciting: it was frightening.

Mapmaking in the seventeenth century was dominated by publishers in Amsterdam, Paris, and to a lesser extent London; the latter part of the century saw a flourishing of the mapmaker's art in Italy, particularly in the work of De Rossi, Cantelli, and the inimitable Vincenzo Coronelli. Nuremberg looms large in printing history for having been home to Schedel's 1493Liber Chronicarum, but does not appear prominently among map producing cities until the end of the 16th century with the advent of mapmakers like Sandrart, and Pufendorf, finally flourishing under Homann. (It is likely that the depredations of the Thirty Years' War, which halved Nuremberg's population in the first half of the seventeenth century, contributed to the city's late contribution to cartography.)

The dating of Sandrart's maps is very uncertain, as he never produced a formal atlas. His separately-published works continued to be added to composite atlases well into the 18th century, adding to the confusion. Here we are following Betz, who dates it c. 1697 to correspond with dated examples of Sandrart's other work.