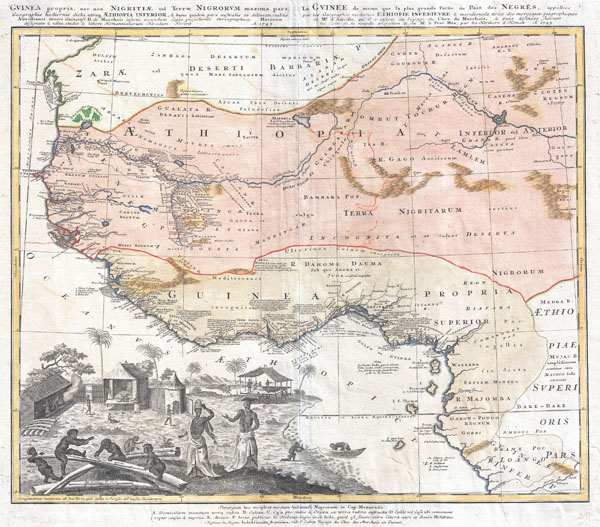 One of the most beautifully produced maps of west Africa to appear in the 17th century. Based on earlier Homann maps and research by Anville, this map covers the northwestern part of Africa from Cape Blanc and Senegal to Guinea Inferior, around the Bite of Africa, to the Congo and Barbela Rivers. As with most maps of Africa from this period, the coastlands are highly detailed while the interior is either blank or extremely speculative. The coastal lands between the Niger River and Biafra are particularly well mapped with copious Latin notations regarding the peoples and places depicted. The inland course of the Niger River itself, a matter that was being actively debated in Europe at the time, is mostly speculative beyond a certain point. Our map actually shows two Niger Rivers, an eastern and western Niger, which are proximal to one another but do not in fact meet up. There are several unnamed mountain ranges in the interior which are possibly an embryonic representation of the Mountains of Kong - a presumed source of the Niger that was popularized in the late 18th and early 19th century. This map also names numerous African kingdoms and tribal groups, including Biafra, Benin, Bambara, Pongo, Bituin, etc.

One of the most outstanding aspects of this map is the spectacular decorative cartouche in the lower left quadrant. Ostensibly the cartouche depicts a typical African village. Shows several huts as well as indigenous Africans engaged in various 'tribal' activities. Each element of the cartouche is labeled with a letter and referenced in a table below the map. On a deeper level the cartouche is designed to highlight the lucrative ivory trade. Cherubic African children are depicted playing with monstrous Elephant tusks which are also shown stacked in the background. In a moment of artistic inspiration, the creator of this cartouche also uses the large ivory tusks in the foreground to show his distance scales.

This map was drawn by Matthias Haas based on the cartographic work of J. B. de Anville. It was published in Nuremburg, Germany by the Homann Heirs.


Johann Matthias (Matyhias) Haas (Hasio, Haase) (Latinized as Johannes Hasius) (January 14, 1684 - September 24, 1742) was a German mathematician, astronomer, and cartographer. Haas was born in Augsburg but is known to have held academic positions in Nuremburg, Leipzig and Wittenberg, where he was a professor of mathematics. He produced several maps for the Homann Heirs firm in addition to several publications of his own. Today is memorialized by a crater on the Moon - Hase Crater.