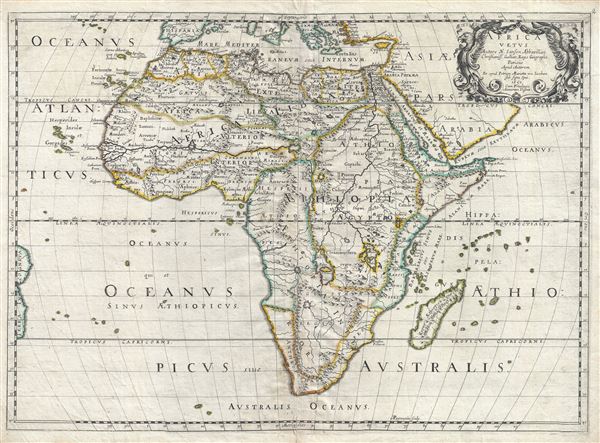 An uncommon old color first edition example of Nicolas Sanson's map of Africa, prepared an issued separately in 1650. Sanson's map covers Africa in full with adjacent parts of Europe and Arabia represented in part. Sanson, a historian as well as a cartographer, intended this map to illustrate Africa as it may have appeared prior to European discovery and exploration. Although the general shape of the continent as well as the surrounding islands and oceans reflect European cartography of the era, Sanson has turned to the Alexandrian cartographer of antiquity, Claudius Ptolemy, to fill in the interior. The southernmost labeled place on the coast is Prassum Promont, a location identified by Ptolemy as the southernmost limit of geographical knowledge. He also follows Ptolemy in his depiction of the White Nile River and its dual lake sources at the base of the Maintains of the Moon. The Ptolemaic mapping of the Nile remained a common feature of Africa maps well into the early 19th century when the explorations of Livingstone and Speake provided new and reliable reconnaissance. The southernmost extreme of Africa he as identified as Anthropophagi Aethiopes (Cannibals).

This map was issued separately in 1650 in anticipation of Sanson's 1658 Cartes Generales. Many examples are also found tipped into this atlas. It was published by Sanson in conjunction with Pierre Mariette, whose name also appears in the title cartouche. The engraving is the work of Abraham Peyrounin (c. 1620 - c. 1666). Several later posthumous editions followed with an updated cartouche as well as revised information throughout the interior.


Pierre Mariette (1569 - 1657) was a French publisher and engraver active in Paris during the first half of the 19th century. Mariette established himself as successful publisher of art prints, but decided to turn his energy to map with the purchase of Melchior Tavernier map plates in 1644. Tavernier had partnered with Sanson before his death and Mariette followed suite. Around 1644- 1648 Mariette partnered with Nicolas Sanson, a then nascent figure in French cartography, to produce folio maps and atlases. The Sanson-Mariette relationship depended upon Sanson to draw and obtain rights for the maps while Mariette engraved them and paid for the expensive printing process. The two then shared rights to the maps into perpetuity. The finished copper plates were split between two such that neither could publish an atlas without the other's assent. The relationship seemed reasonably amicable until Mariette's death in 1657, when disputes arose between Sanson and Mariette's heirs. A court battle finally returned the most of the plates to Sanson's own heirs in 1674. As a consequence, some printings feature the Mariette imprint, others the Sanson imprint, and still others both imprints.


Abraham Peyrounin (c. 1620 - c. 1666) was a French engraver active in Paris during the middle part of the 17th century. Peyrounin is best known for engraving maps for the preeminent French geographers of the period, Nicolas Sanson and his partner Pierre Mariette. Little else of Peyrounin's life is rememberd.

OCLC 54118059. Betz, R., The Mapping of Africa A Cartobibliography of Printed Maps of the African Continent to 1700, #79. Norwich, O. I., Norwich's Maps of Africa: An Illustrated and Annotated Cartobibliography, #35. Tooley, R. V., Collectors' Guide to Maps of teh Africa COntinent and Southern Africa, page 99.
Looking for a high-resolution scan of this?