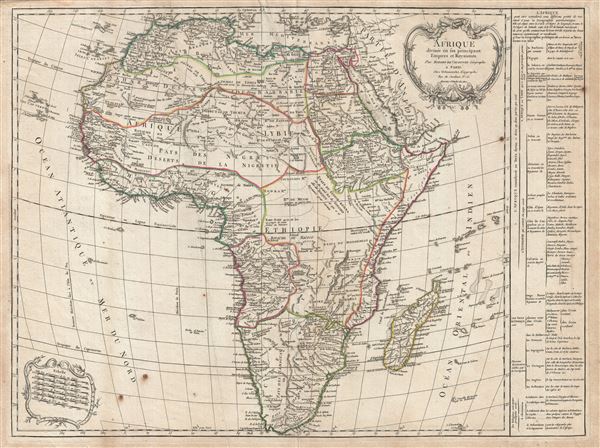 An exceptional 1784 map Africa by Robert de Vaugondy and Charles Delamarche. Following on the work of Nicolas Sanson, Vaugondy's map of Africa covers eth entire continent in considerable detail. The late 18th century saw little in the way of African Exploration, so other than some minor updates to South Africa, this issue, the first Delamarche state, remains consistent with the map originally published by Robert de Vaugondy in 1749.

Like most maps of Africa from this period, the while is rife with speculation. Vaugondy, unlike many of his contemporaries, attempts to limit his geographical analysis of the continent to those areas reported on in relatively recent times. Thus thus the White Nile, rather than turn east to meet with the Niger or flow south into the Ptolemaic Mountains of the Moon, merely tapers off into the unknown. Central Africa is largely left blank, although appears to be divided into several little known kingdoms: Monoemugi, Mujac, Gingir-Bomba, and Macoco, among others. The Sultanate of Zamziba is given control of much of Western Africa from the Horn to the Zambesee River. Lake Malawi appears in recognizable but embryonic form with it supper terminus left unmapped and thus unknown. In west Africa the known kingdoms of Benin and Congo are mapped according to the early 18th century conventions. South Africa exhibits updated information associated with mid-18th century discoveries.

Two rococo cartouches appear in the upper right and lower left quadrants. A statistical table appears to the right of te map proper.This is the 5th state of Robert de Vaugondy's Africa map and was issued for the 1784 Delamarche issue of the Atlas Universel.


Charles-François Delamarche (1740 - 1817) founded the important and prolific Paris based Maison Delamarche map publishing firm in the late 18th century. A lawyer by trade, Delamarche entered the map business with the acquisition from Jean-Baptiste Fortin of Robert de Vaugondy's map plates and copyrights. Delamarche appears to have been of dubious moral character. In 1795 the widow of Didier Robert de Vaugondy, Marie Louise Rosalie Dangy, petitioned a public committee for 1500 livres, which should have been awarded to her deceased husband. However, Delamarche, proclaiming himself Vaugondy's heir, filed a simultaneous petition and walked away with the funds, most of which he was instructed to distribute to Robert de Vaugondy's widow and children. Just a few months later, however, Delamarche proclaimed Marie Dangy deceased and it is highly unlikely that any funds found their way to Robert de Vaugondy's impoverished daughters. Nonetheless, where Robert de Vaugondy could barely make ends meet as a geographer, Delamarche prospered as a map publisher, acquiring most of the work of earlier generation cartographers Lattre, Bonne, Desnos, and Janvier, thus expanding significantly upon the Robert de Vaugondy stock. Charles Delamarche eventually passed control of the firm to his son Felix Delamarche (c. 1750 - c. 1850) and geographer Charles Dien (1809 - 1870). It was later passed on to Alexandre Delamarche, who revised and reissued several Delamarche publications in the mid-19th century. The firm continued to publish maps and globes until the middle part of the 19th century. Learn More...