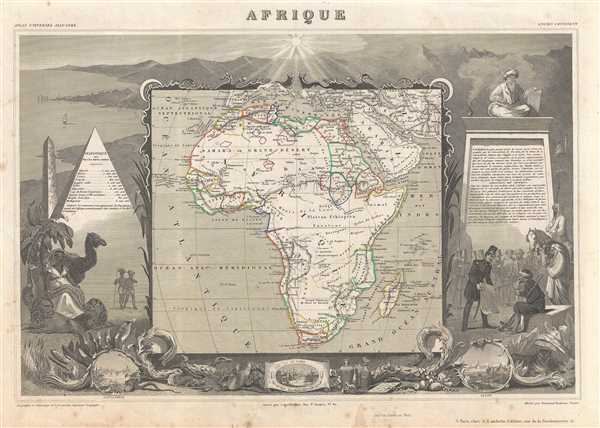 Elaborately decorated map of Africa, including views of Cairo, Alexandria, and Algiers.

A fine example of Victor Levasseur's desirable decorative map of Africa, dated 1852. The map depicts the entire continent per perceptions of the time. Much of the interior is vague and unmapped, except for the northern Nile Valley, the French colonies in Senegal, Gambia, and Algeria, and the colonies of the Dutch and English in South Africa. A semi-accurate mapping of the Niger, which is uncommon for the period, is also depicted here. The map correctly identifies Lake Chad. The whole is surrounded by elaborate decorative engravings designed to illustrate both the natural beauty and trade richness of the land. These include the Pyramids, a seated Imam, the Luxor Obelisk, and views of Cairo, Alexandria, and Algiers. There is a short textual history of the region depicted on both the left and right sides of the map. Published by V. Levasseur in the 1852 edition of his Atlas National de la France Illustree.