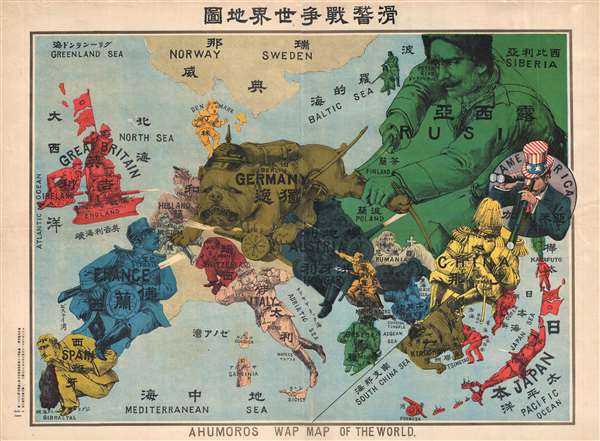 One of only 2 Japanese serio-comic maps illustrating World War I.

A very rare Japanese broadsheet serio-comic map of Europe and Asia drawn just following the outbreak of World War I. This map was drawn by Ryōzō Tanaka and published by the Shobido Company of Tokyo. The map covers all of Europe and parts of East Asia. All text is in both English and Japanese, clearly indicating that the audience for this map is not exclusively Japanese, but also potential allies in England and the United States.

The map conveys an interesting message that juxtaposes the conflict in Europe with troubles in East Asia and suggests a common cause between England and Japan. At center a threatening German bulldog wearing a spiked helmet crushes Belgium under its paw. Britain appears as a dreadnaught focusing its substantial firepower on Germany. This situation is mirrored in the lower right corner, where a curiously designed half-inset illustrates the East Asian theater. Here Germany, situated in its colonies around Tsingtao (Qingdao), known collectively as the Kiautschou Bay Concession, is again represented as a bulldog. Japan, like England, appears in Red, and is similarly focusing its military might and firepower on the German bulldog.

When War I in Europe Broke out on August 15, 1914, Japan delivered an ultimatum to Germany demanding that it relinquishe its control of the disputed territory of Kiaoutschou. Germany rejected the ultimatum and Japan declared war on August 23rd. The Japanese navy bombarded German Tsingtao and, on November of 1914, following the Siege of Tsingtao, Japanese forces occupied the region. On the present map Germans still controlled the concessions, but Japanese forces out of Port Arthur (Dalian) are clearly advancing.

Elsewhere on the map the United States, personified as Uncle Sam, observes both Europe (with binoculars) and Asia (with a telescope), interested in the conflict, but as yet unwilling to take a stand. France, like England, directs it firepower towards Germany while standing on the back of Spain. Switzerland, represented as a large child, covers its ears and puts its head down. Austria is directing its attention to enemies in Russia and Serbia. Russia, an enormous man filling the upper right corner, is fully occupied with Germany, and is trying to cut off its leg, possibly representative of attempts to seize East Prussia. China, shown as a great yellow general, rests his head in his hands, but still kicks at the German bulldog of Tsingtao. Italy, like the United States, watches.

This is the second of two serio-comic maps published in Japan to illustrate World War I, both by Tanaka. The first map, A Humoros Atlas of the World, focuses more on Russia and was published just a few days prior. Both maps are today exceedingly rare with no market history. The OCLC identifies only a single holding of this map at Brown University.

Ryōzō Tanaka (田中良三, January 16, 1874 - July 1, 1946) was a Japanese printer, illustrator, and bookseller active in Japan during the late 19th and first half of the 20th century. Tanaka was born in Kyoto, the second son of Haishi Hashimoto. He apprenticed under an Osaka bookseller before relocating to Tokyo in 1897 to ope his own business, the Tokyo Shobido Gakyou book cart. It is said he started his book business with just 30 yen and 600 traditional ukiyo-e style prints. By 1898, he acquired a physical location in the Kanda book district of Tyoko and began printing on his own account, pioneering the new printing technology of chromolithography. Tanaka issued a series of serio-comic style maps in Japanese and English illustrating the events of World War I. Most of Tanaka's original printing plates were destroyed in a 1945 allied air raid on Tokyo. After the war, Takaka's business was taken over by his eldest son, Tadanaka Sadzu, who attained some success. Learn More...