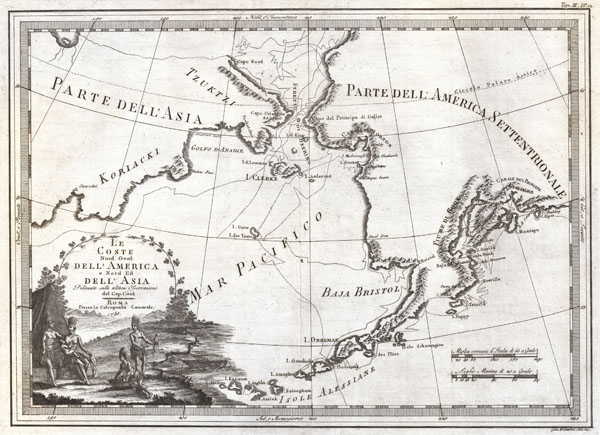 Possibly the most beautiful map of Cook's travels in the Arctic.

An extraordinarily fine example of Cassini's 1798 map of Alaska, the Bering Strait, and Siberia. Cassini issued this map in his 1798 atlas to illustrate the discoveries made by James Cook. Cook was the first to accurately chart the Alaskan coastline and provide a detailed mapping of the Aleutian Islands. Cook's zigzagging route is shown as he skirts the Aleutian Islands, passes through the Bering Strait into the Arctic Ocean, and then turns back to sail south along the Siberian Coast. Here the Aleutians are collectively identified as 'Isole Alessiane,' though many of the original islands are clearly given indigenous names. A large decorative cartouche in the lower left depicts four American Indians and a baby. This is perhaps the most beautiful of the many maps designed to illustrate Cook's voyages. As a side note the condition of this particular example is phenomenal, the best we've seen, if you are considering adding this extremely scarce map to your collection, this is the one you want.