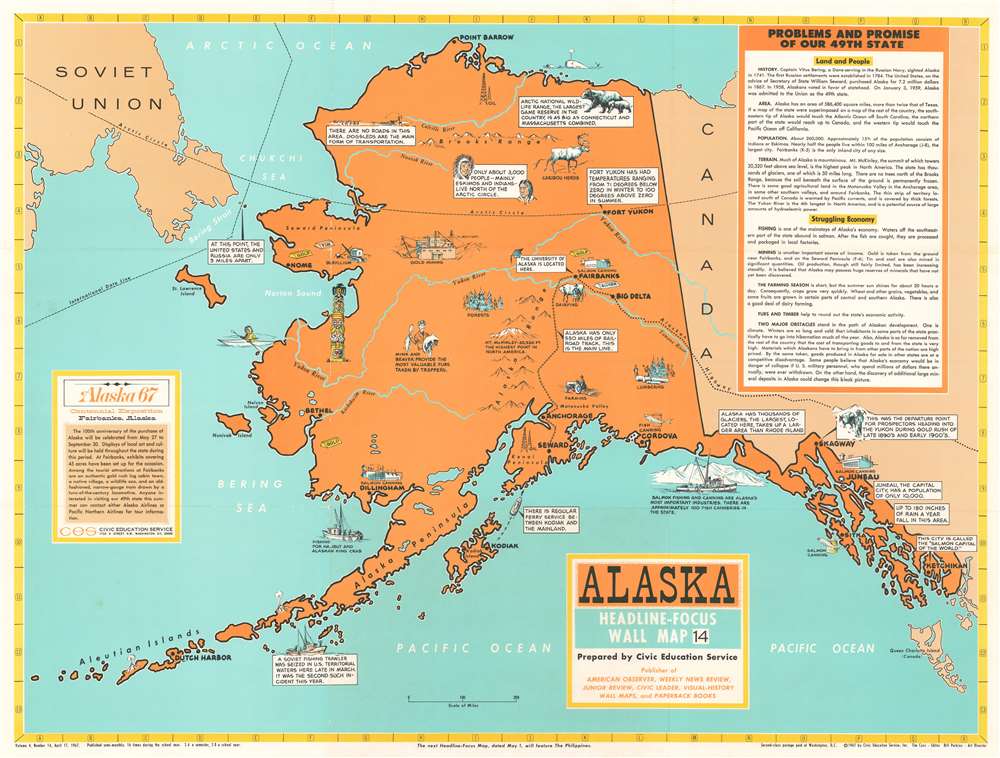 Created to celebrate the 100th anniversary of the purchase of Alaska by the United States.
$375.00

This is a 1967 Civic Education Service pictorial wall map of Alaska celebrating the centennial of the purchase of Alaska. Pictorial vignettes dot the state and highlight the state's industry, people, and wildlife. Fishing boats promote Alaskan halibut and king crab and a special vignette references the impounding of Soviet fishing trawlers discovered in Alaskan waters. Several fish canneries are illustrated, along with mines for gold, tin, and beryllium, and successful trappers. North of the Arctic Circle, Eskimos and Indians are stated to be the only people in residence, with vignettes of caribou, grizzly bears, and a dogsled team alongside them. Alaska's remoteness is also emphasized, aside from the barrenness of the land above the Arctic Circle. The map states that only 550 miles of railroad track has been built in the state, which is the largest in the U.S. Cities and towns are labeled, including Juneau, the state capital, Fairbanks, Seward, Anchorage, and Dutch Harbor. Several rivers are illustrated and labeled, and Mt. McKinley, the tallest mountain in the U.S., is featured in a vignette, as is the Brooks Range above the Arctic Circle. A textbox in the lower left celebrates the 100th anniversary of 'Seward's Folly', better known as the purchase of Alaska from Russia by the United States, while a second, larger textbox summarizes Alaska's people, land, and industries.

This map was created and published by the Civic Education Service in 1967. This is the only known example.