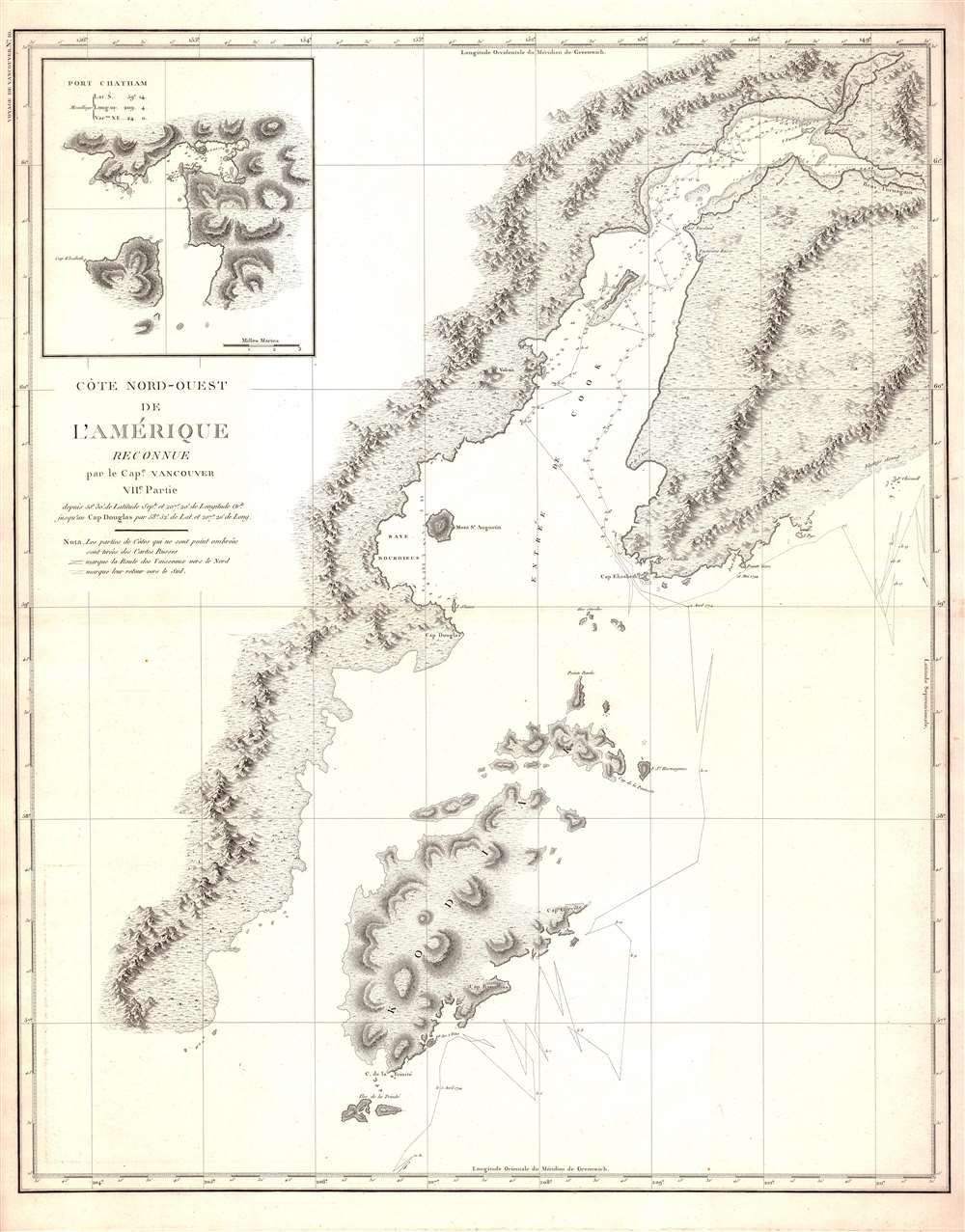 One of the great navigator George Vancouver's most important and influential maps, this is Vancouver's 1799 mapping of Kodiak Island and Cook Inlet, near Anchorage, Alaska. Cook Inlet was one of the primary objectives of the Vancouver Expedition, as it remained unexplored after James Cook's initial tenuous mapping, it was considered a possible outlet for the Northwest Passage. Centered on the entrance to Cook Inlet, this map covers from Knik Arm and Turnagain Arm southwards as far as the southernmost tip of Kodiak Island. It evokes the rugged topography of the region, showing mountains and rough ground pictorially, albeit without precise elevations. Mount St. Augustin and several volcanoes are noted. An inset of Port Chatham, at the southern tip of the Kenai Peninsula, appears in the upper left quadrant.

You Can't Get There From Here

One of the primary goals of Vancouver's 1793-4 expedition to American Northwest Coast was to resolve doubt with regard the existence of a Northwest Passage. Following the Cook expeditions there remained but one possibility that might lead to the legendary water route - Cook Inlet, a large bay discovered, but never fully explored, by Captain James Cook in 1778. Vancouver's mission was to fully map Cook Inlet and determine if it did indeed connect to a watery network of rivers and lakes that could be used to cross the continent. Having skirted the eastern shore of Kodiak Island, Vancouver entered Cook Inlet in April 1794. By May he had navigated the full extent of the Inlet, becoming the first European to visit the future site of Anchorage, Alaska. It was at this point that Vancouver's expedition reached its northernmost limit and turned around for the return trip to Europe, having - for Cook inlet, at least - settled the issue of a Northwest Passage.

This example of Vancouver's map was issued in the highly desirable 1799 French edition of Vancouver's atlas, which is noted for being more beautifully produced with better engraving, higher quality paper, and more detail than the 1798 English edition. None of the maps list an engraver, but in the atlas's introductory text, it states that they were engraved at the Dépôt des Cartes et Plans de la Marine under the supervision of Jean-Nicholas Buache de Neuville. The French edition of Voyage de découvertes is well represented in institutional collections. However, we see examples of the separate chart cataloged only in the Biblioteca Nacional de España.