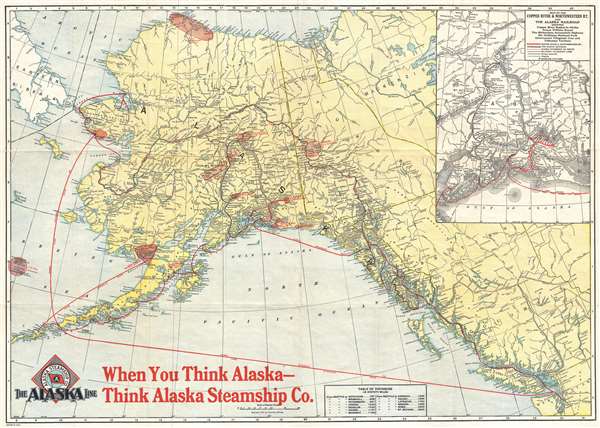 Promotes incredible natural wealth of Alaska and how easy it is to get there!
$450.00

This is a 1917 Poole Brothers map of Alaska promoting the Alaska Steamship Company and their routes. The map covers from the Bering Sea, the Bering Strait, and eastern Siberia to the Yukon Territory and from the Arctic Ocean to Seattle, Washington. Even though it was printed in 1917, one of the goals of this advertisement was the promotion of the vast mineral and other natural resources being exploited in Alaska and the Yukon. The Klondike, Fairbanks, and Nome gold placers are highlighted, as well as the Nenana, Matanuska, and Bering River coal fields. Other highlighted resources include the Point Barrow Oil Field, along with a handful of other oil fields, and the Kennecott copper mines. Mt. McKinley National Park and the U.S. Seal Preserve around the Pribilof Islands are identified using the same symbol, allowing for no distinction in importance between preservation of natural landscapes and the utilization of natural resources.

The two major routes of the Alaska Steamship Company are illustrated in red, the Inside Route, which ventured up the Pacific coast to Skagway, Valdez, and Seward, and the Nome and St. Michael route. Innumerable towns are labeled throughout Alaska, along with mountains and mountain ranges, rivers, islands, bays, and islets. The Copper River and Northwestern Railroad and the Alaska Railroad are depicted both on the central and in an inset map situated on the upper right. The inset map details the route of the Copper River and Northwestern from Seward to Fairbanks and the Alaska from Cordova to Kennecott. The inset map also notes the military telegraph lines, stage routes, and wireless stations. A table of distances from Seattle to thirteen different locations in Alaska is included along the bottom border.

This map was produced by the Poole Brothers Company of Chicago to promote the Alaska Steamship Company.

Very good. Laid down on archival tissue for stability. Blank on verso.