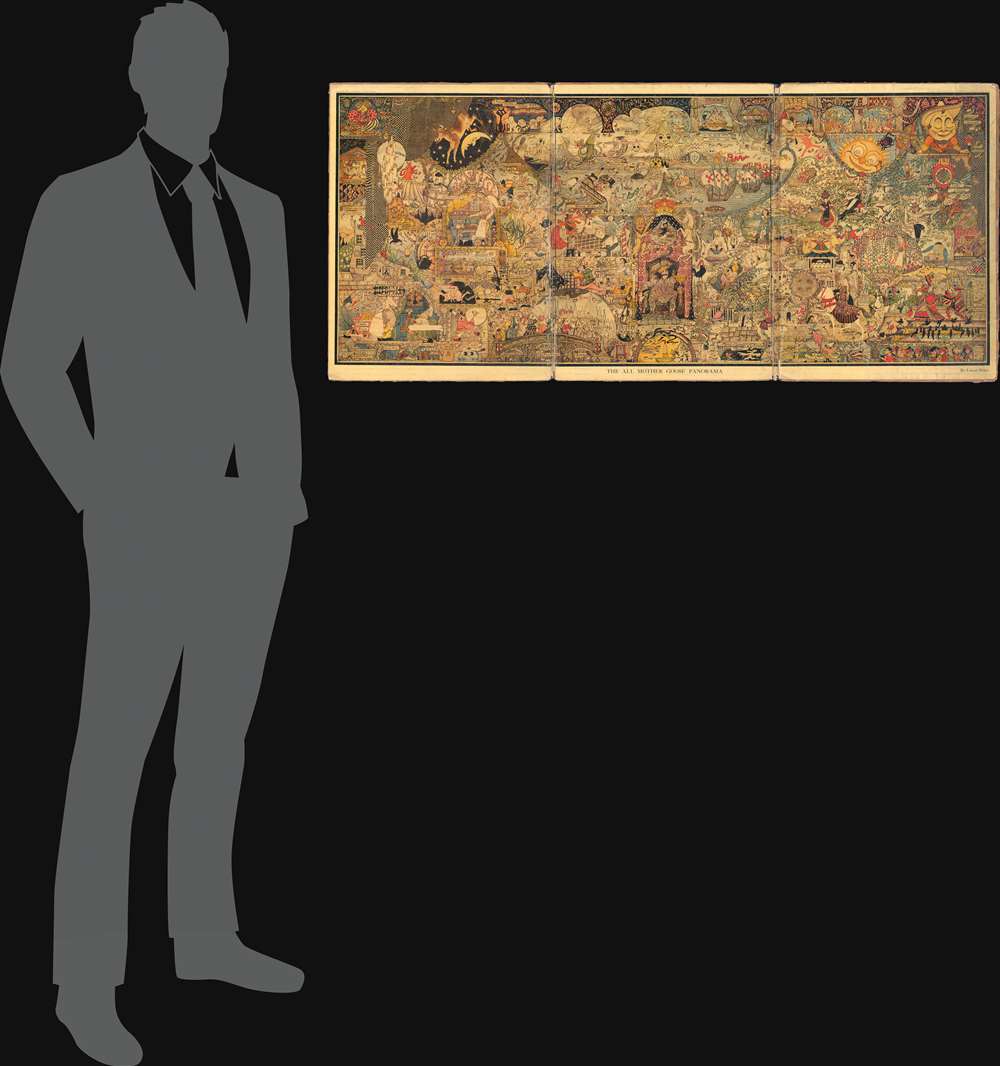 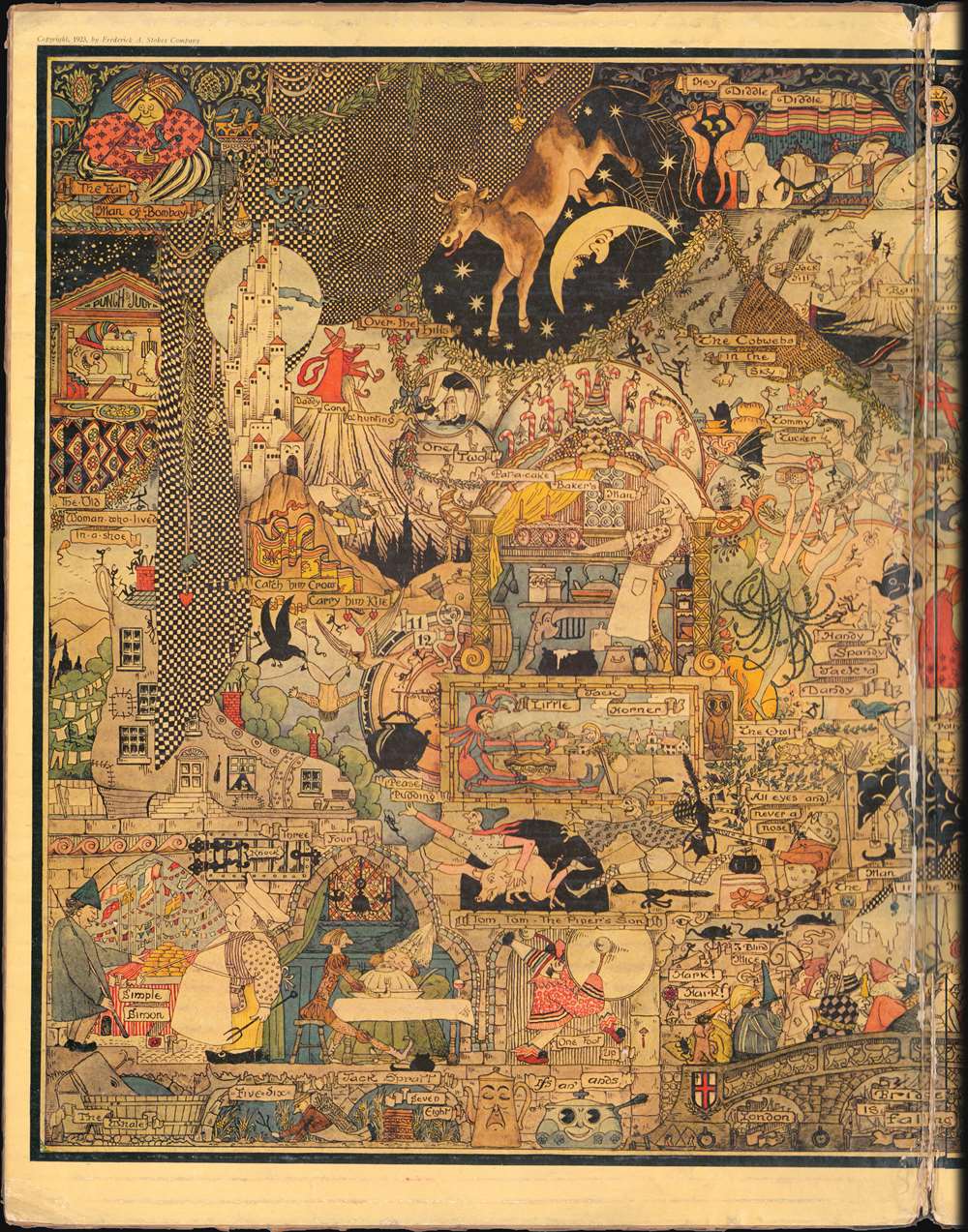 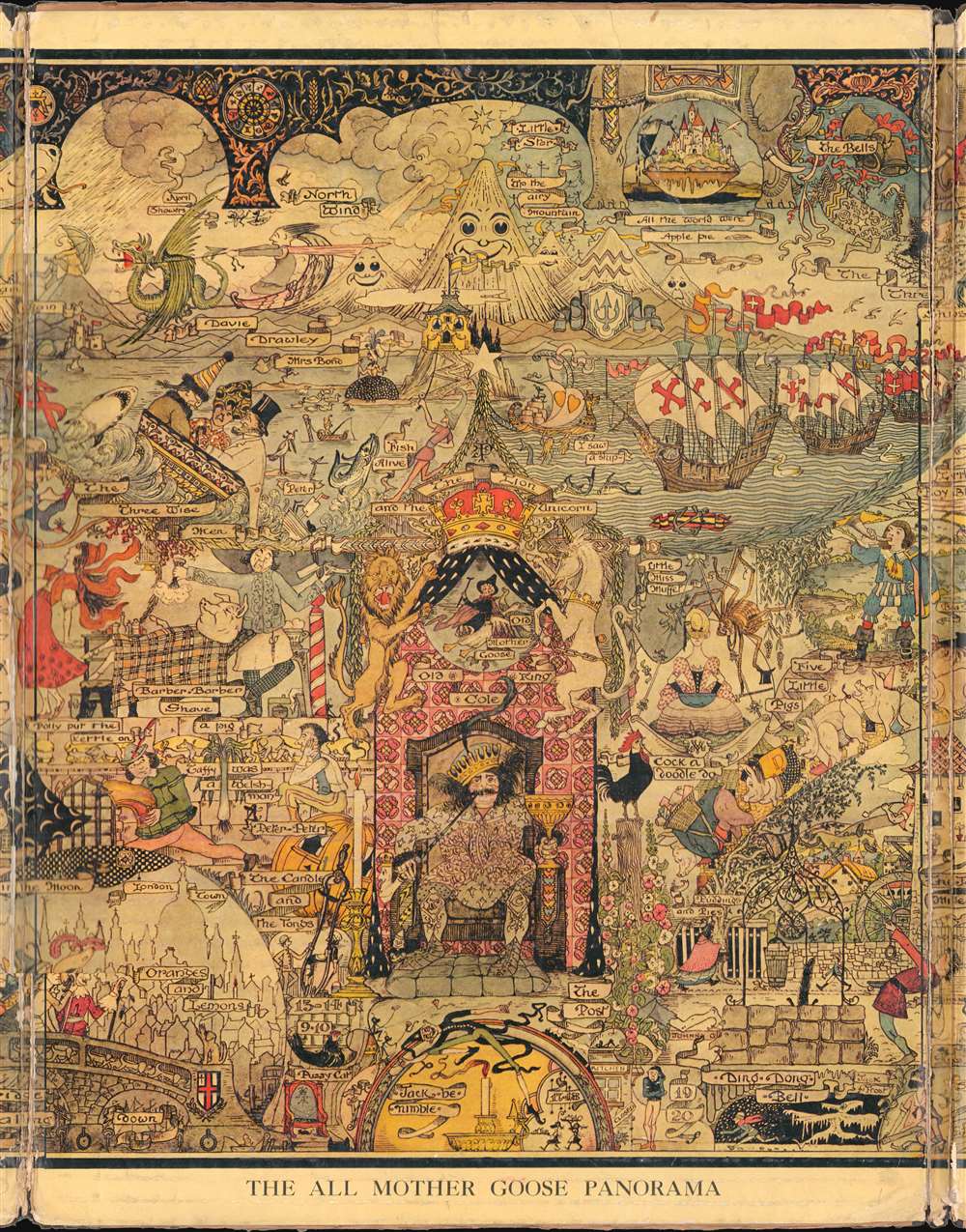 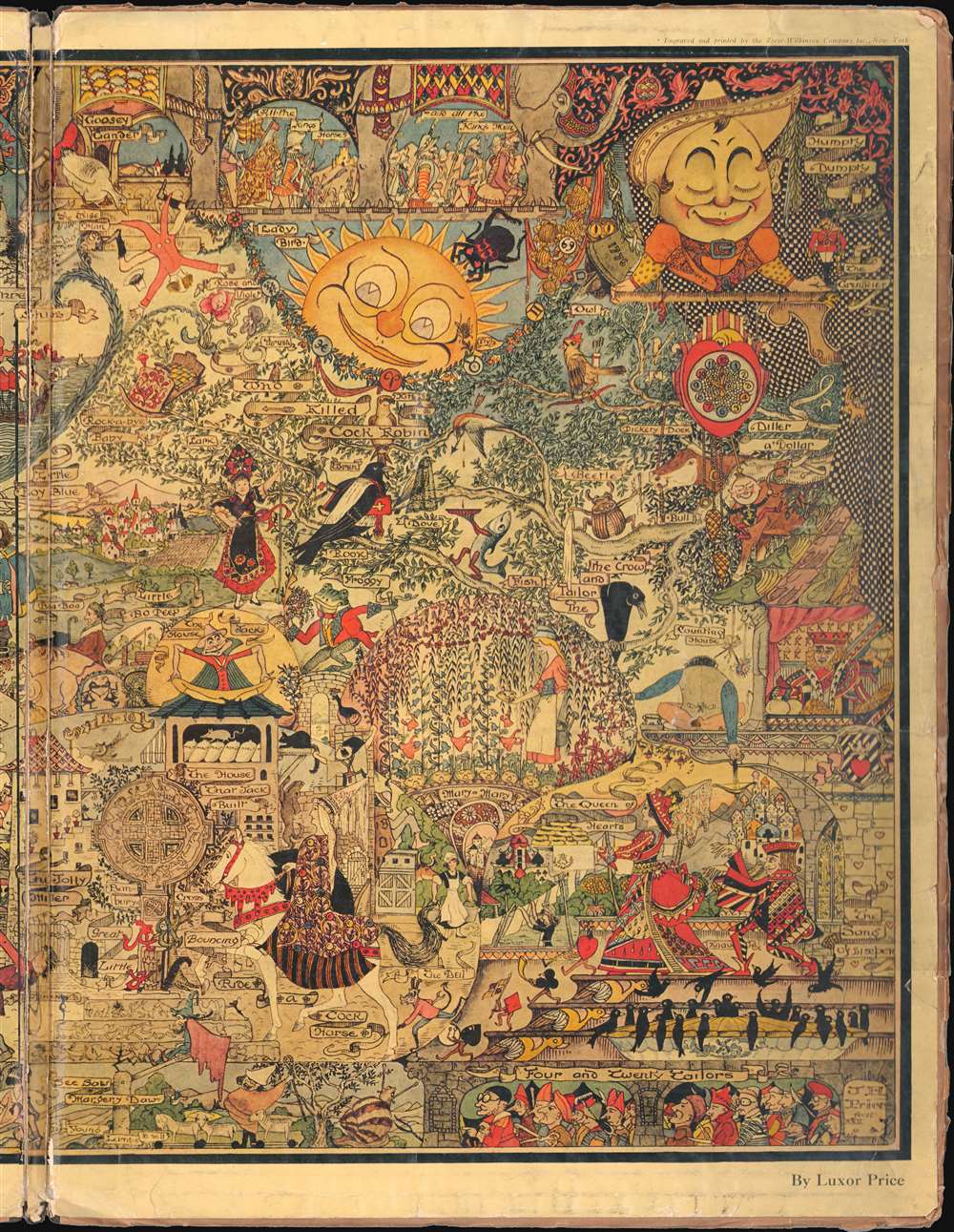 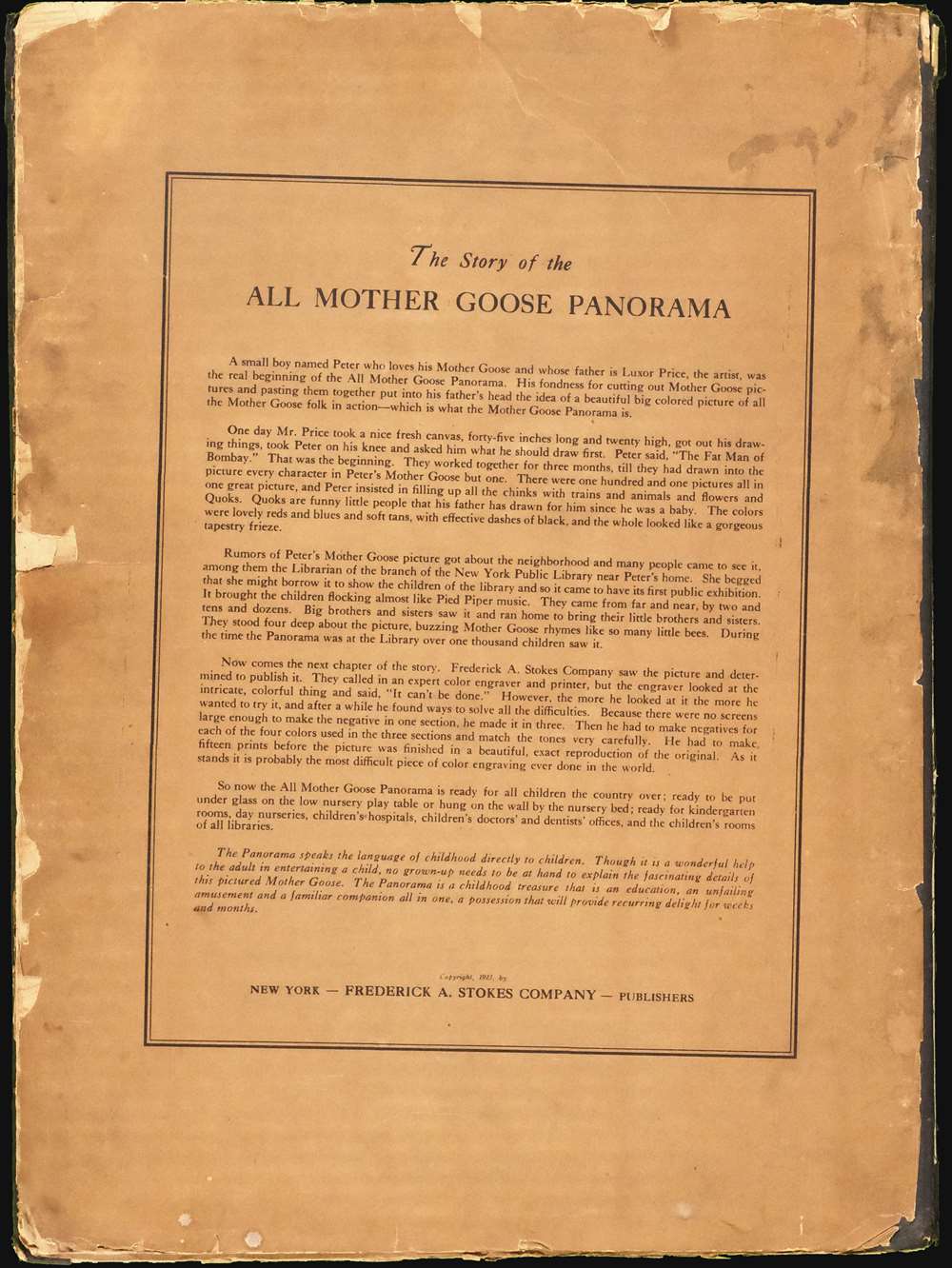 The only surviving example of a fantasy masterwork.

This is the only known surviving example of Luxor Price's 1923 panoramic view of Mother Goose Land. The view was inspired by Price's son Peter's love of all-things Mother Goose. He claims that all Mother Goose characters save one were herein illustrated - which is missing we have been unable to ascertain. The map follows similar 'fantasy' maps issued shortly after World War I that harken back to the more halcyon Edwardian Era (1901 - 1914). The overall density of images is impressive enough that it is unsurprising why the printer made the rather bombastic claim that this was the 'most difficult piece of color engraving ever done in the world.'

The view falls into a small genre of 'fantasy' maps issued in Europe and America following the horrors of World War I. The first such map is Bernard Sleigh's (1852 - 1954) iconic Anciente Mappe of Fairyland, issued in 1917. While it is not clear if Price was aware of Sleigh's great work, the similarity is unmistakable. Like Sleigh's work, the All Mother Goose Panorama can be understood within the context of social post-war trauma and escapism. After the unprecedented horrors of World War I (1914 - 1918), and the socio-economic upheaval it wrought upon traditional social structures, it is easy to imagine the appeal of retreating into a fantasy land. The third such map/view in this style to appear during the Interwar Period was Jaro Hess's 1930 Land of Make Believe. Of the three, the Price map is by far the rarest, being known in but one example.

How It was Conceived

The textual verso contains useful context regarding the concept and production of the view:

One day Mr. Price took a nice fresh canvas, fort-five inches long and twenty high, got out his drawing things, took Peter [his son] on his knee and asked him what he should draw first. Peter said, 'The Fat Man of Bombay.' That was the beginning. They worked together for three months, till they had drawn into the picture every character in Peter's Mother Goose but one. There were one hundred and one pictures all in one great picture, and Peter insisted in filling up all the chinks with trains and animals and flower and quoks. Quoks are funny little people that his father has drawn for him since he was a baby. The colors were lovely reds and blues and soft tans, with effective dashes of black, and the whole looked like a gorgeous tapestry frieze.

Apparently, the technical production of this was complex and challenging. The large piece was printed in three separate sections, each requiring a total of five screens, one for each color plus black. The challenges in producing the map are described on the verso,

Frederick A. Stokes Company saw the picture and determined to publish it. They called in an expert color engraver and printer, but the engraver looked at the intricate, colorful thing and said, 'It can't be done.' However, the more he looked at it the more he wanted to try, and after a while he found ways to solve all the difficulties. Because there were no screens large enough to make the negative in one section, he made it in three. Then he had to make negatives for each of the four colors used in the three sections and match the tones very carefully. He had to make fifteen prints before the picture was finished in a beautiful, exact reproduction of the original. As it stands it is probably the most difficult piece of color engraving ever done in the world.

As is the publisher intent,

The Panorama speaks the language of childhood directly to children. Though it is a wonderful help to the adult in entertaining the child, no grown-up needs to be at hand to explain the fascinating details of this pictured Mother Goose. The Panorama is a childhood treasure that is an education, an unfailing amusement and a familiar companion all in one, a possession that will provide recurring delight for weeks and months.

This map was drawn in the early 1920s and published in 1923. Completed examples may not have been put into circulation until 1924. The printing may have been heroic, but the follow up mounting presentation was slipshod at best. The view was laid down on corrugated cardboard which was then folded into sections. The weak acidic cardboard, the item's use by children, and small print runs likely contributed to individual examples having a very short life span. This is the only known surviving example, but we have heard reports of one other potential example in private hands.

John Penry Hyde 'Luxor' Price (June 15, 1874 - February 23, 1950), publishing under the pseudonym Luxor Price, was an American illustrator and children's book author active in the early 20th century. Price was born in Cardiff, Wales of the lesser gentry (his father was an architect) and educated at Christ’s College, Brecon. He emigrated to the United States in 1893. After traveling throughout the country, he settled in Clinton Corners, New York, with his wife Gladys C. Powell Price, also from Cardiff. From about 1899 Price worked as a personal secretary to James Gregory McLoughlin (180 - 1918), a railroad official, but also heir to the McLoughlin Brothers publishing empire - noted for their work with children's books. It is not clear how Price came to be associated with McLoughlin, but they may have been connected through family friend. Price was a self-trained artist. His first printed work began appearing in magazines in the 1920s. It was around this time that he issued the 'All Mother Goose Panorama', a piece that earned him the attention of children's book publishers and authors. Price issued various fantasy maps, many inspired by European serio-comic maps, through Arden Galleries, and others. He also illustrated The Magic Map for Mary Graham Bonner. He also issued his own work, including a popular book called The Quoks starting 'funny little people' that he invented for his son, Peter. Price did not issue any further children's works after 1933. He died in upstate New York in 1950. Learn More...