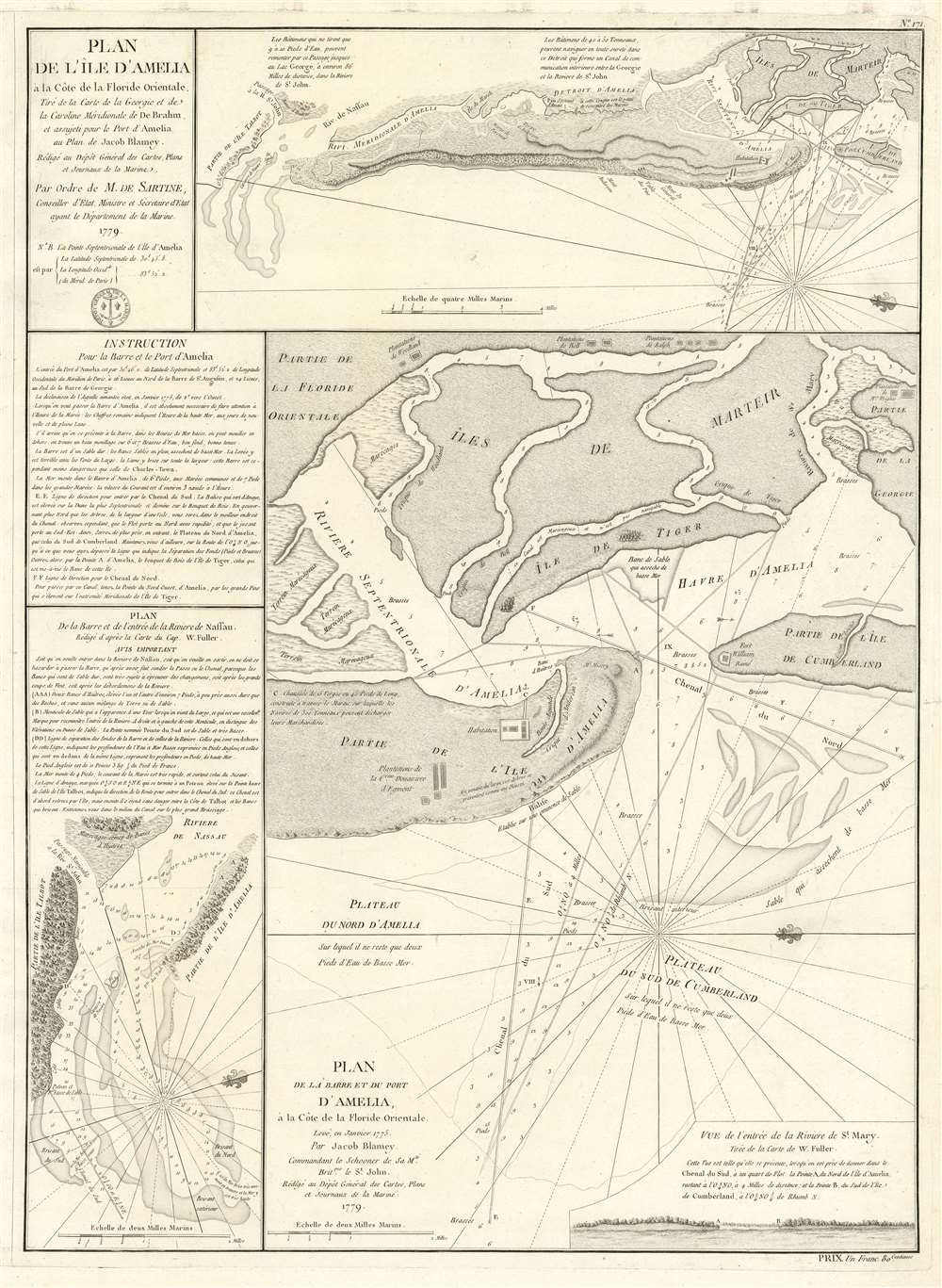 This is a rare 1779 American Revolutionary War map of Amelia Island, Florida, issued by Antoine de Sartine (1729 - 1801) and Jean-Nicholas Buache de Neuville (1741 - 1825). The chart was issued following the 1778 Treaty of Alliance, in which France formally recognized the United States and offered to aid the fledgling country against the British. Early in the war, French aid was primarily maritime, so the Depot de Marine recognized the need for better nautical charts and began to compile and improve British charts of the North American coastline.

The present map essentially combines three earlier British charts, although in this case, the French charts are mildly improved and more finely engraved. The main chart, occupying the lower right two-thirds of the map, is oriented to the east and covers the northern part of Amelia Island as well as the southern part of Cumberland Island where the ruins of Oglethorpe's Fort William are noted. It also notes Mount Misery, and the 'Habitation', essentially a manor house and outbuildings designed to manage the Dowager Egmont's large indigo plantations noted further south - the subsequent location of Fernandina. On the Florida mainland the plantations of Woodland, Bell, Wright, and Ralph are identified. In the lower right there is a coastal view illustrating the entrance to the Saint Mary River, the Georgia-Florida border. Cartographically this map is derived from Jacob Blamey's map of 1775, published by Sayer and Bennett.

The second map, both in terms size and significance, appears at top right and covers all of Amelia Island and parts of Talbot Island, the entrance to the Nassau River, and southern Cumberland island. It is derived from the seminal 1757 John William Gerard De Brahm (1717-1798) mapping of the South Carolina coast. Although it overlaps somewhat with the more specific map below, it offers a valuable general reconnaissance of the region.

The third map, appearing in the lower left corner, focusses specifically on the western part Amelia Island, Talbot Island, and the entrance to the Nassau River - an important artery for navigators. The map, derived from the 1770 work of Captain William Fuller, is oriented to the northeast and features numerous soundings and details of significance to the mariner.

John Perceval, 2nd Earl of Egmont, received an expansive grant on Amelia island in 1763, when Spain ceded Florida to England in exchange of Havana, which had been seized on year earlier in 1762, during the Seven Years War. The grant, encompassing some 10,000 acres, the entire island, was ideally suited for the cultivation of cotton and indigo. Egmont himself never visited the Americas, but under supervision of the experienced planter Stephen Egan, the East Florida plantation prospered. When Egmont died in 1770, the plantation continued to be managed by his widow, Catherine Perceval (1731-1784), the Dowager Earless and Baroness Arden. During the American Revolutionary War, the lucrative estate was plundered and destroyed by Georgia Militia, causing Egan to flee with his family and the Egmont slaves. When this map was made, the island was, for the most part, abandoned, but the ruins of the Egmont plantation are noted. The island became more significant later during the War of 1812.

This map was prepared by Antoine de Sartine (1729 - 1801) and Jean-Nicholas Buache de Neuville (1741 - 1825) for issued in the 1780 issued of the Neptune Americo-Septentrional, an important French nautical atlas published for the Depot de Marine for use by the French navy during the American Revolutionary War. The atlas appears here and there in institutional collections, but examples on the private market are exceedingly scarce. Examples of the map were also sold separately to mariners and this is one such example, as confirmed by the price 'Un Franc 80 centimes' in the lower right. This map must have been included with a composite mariner's atlas, now forgotten.