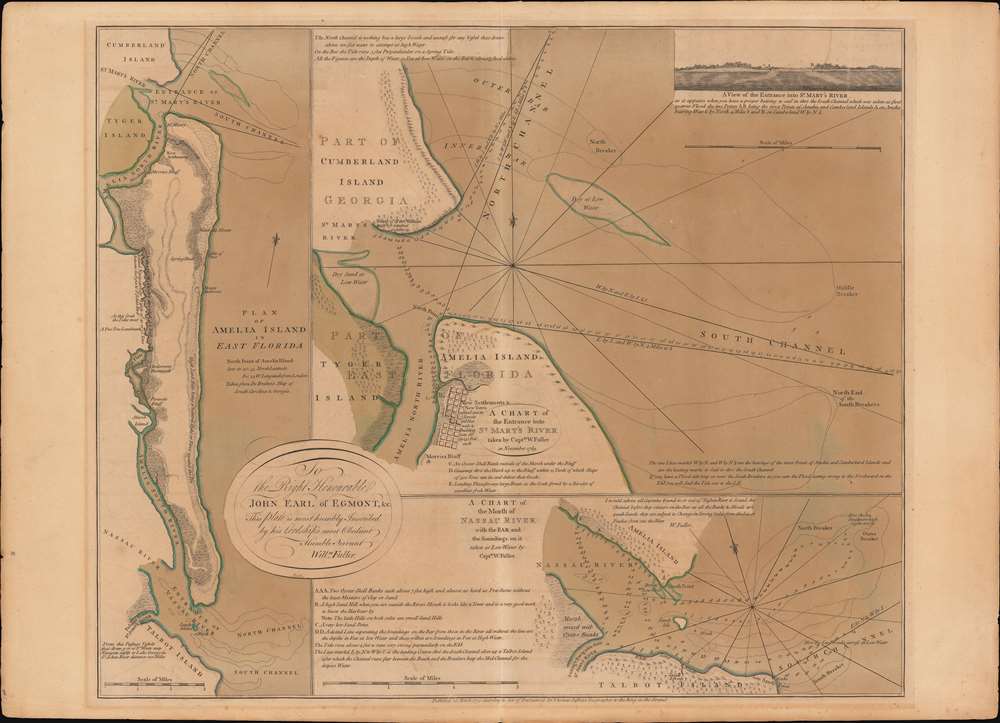 This is Thomas Jeffery's 1770 map of Amelia Island representing the first specific published chart of that part of British East Florida. The map is based upon the William Gerard De Brahm and William Fuller surveys which followed shortly after the 1763 British takeover of Florida. It illustrates the significance of Amelia's natural deep water harbor, long a haunt of pirates, slavers, and smugglers, and details British attempts by John Perceval, 2nd Earl of Egmont, to establish a plantation colony.

The present map essentially combines three charts. The main chart, occupying the upper right two-thirds of the sheet, covers the northern part of Amelia Island as well as the southern part of Cumberland Island where the ruins of Oglethorpe's Fort William are noted. The fledgling settlement of Egmont Town and Morris's Bluff is laid roughly where the old Spanish fort of San Carlos once stood and where Fernandina Old Town stands today. In the upper right there is a profile view of the St. Mary's River entrance.

The second map, both in terms size and significance, appears at left and covers all of Amelia Island and parts of Talbot Island, the entrance to the Nassau River, and southern Cumberland Island. It is derived from the seminal 1757 John William Gerard De Brahm (1717 - 1798) mapping of the South Carolina coast. Although it overlaps somewhat with the more specific map below, it offers a valuable general reconnaissance.

The third map, appearing in the lower right, focuses on the western part of Amelia Island, Talbot Island, and the entrance to the Nassau River - an important artery for navigators. The map, derived from the 1769 work of Captain William Fuller, features numerous soundings and details of significance to the mariner.

John Perceval, 2nd Earl of Egmont, received an expansive grant on Amelia Island in 1763, when Spain ceded Florida to England in exchange for Havana, which had been seized one year earlier in 1762, during the Seven Years' War (1756 - 1763). The grant, encompassing some 10,000 acres (the entire island) was ideally suited for the cultivation of cotton and indigo. Egmont was famous in England for his nostalgia for the 'feudal world' (Bailyn 1986:79), and amassed colonial holdings all over the world that he never visited, as here. His Amelia Island plantations flourished under the supervision of the experienced planter Stephen Egan. When Egmont died in 1770, the plantation continued to be managed by his widow, Catherine Perceval (1731-1784), the Dowager Earless and Baroness Arden. During the American Revolutionary War, the lucrative estate was plundered and destroyed by Georgia Militia, causing Egan to flee with his family and the Egmont slaves.

This map was drawn and published by Thomas Jefferys on March 26 of 1770. The OCLC notes holdings of the chart in roughly nine institutions. Scarce to the market. The map later served as the basis for subsequent maps by Sartine, Le Rouge, Laurie and Whittle, and others.


John William Gerard de Brahm (August 20, 1718 - June 6, 1799) was a German cartographer, hydrographer, engineer, and mystic. De Brahm was born in Koblenz, Germany, the son of Johann Phillip von Brahm, a court musician for the Elector of Trier. He studied engineering in Germany, reaching the rank of Captain Engineer in the Imperial Army of Holy Roman Emperor Charles VII. He resigned this commission in 1748 and shortly thereafter married, at the same time renouncing Catholicism in favor of Luthernism. After his marriage, he led a group of German immigrants to Georgia, then a British Colony, to settle in the German-Lutheran community of Ebenezer. In 1854 he became the Surveyor General of the Georgia Colony, a position he held until 1764. Druing this time, he produced his most important published work, A Map of South Carolina and a Part of Georgia. Afterwards he became Surveyor General for East Florida and the Southern District. In this and subsequent posts he traveled from Florida to Virginia, making a series of detailed maps, many of which survive only in manuscript. In his travels, de Brahm developed close relationships with American Indians whose traditional ways he deeply respected. This led him to become a fervent opponent to not only European colonialism, but also attempts to 'civilize' indigenous populations. During the American Revolutionary War (1775 - 1783) he was imprisoned in Charleston as a British Loyalist. By 1778 de Brahm was in Britain. In 1784, after the War, he returned to America settling in Philadelphia, where he died 12 years later. At some point he became an adherent to the teaching of the heretical German mystic Jakob Böhme (1575 - 1624), who argued that one must fall from grace in order to be redeemed. Learn More...


Thomas Fuller (1608 - August, 16, 1661) was an English historian and Anglican clergyman. Fuller was born in Northamponshire, England and was educated at Queens College, Cambridge. A prodigal student, Fuller was describe by contemporary John Aubrey as "a boy of pregnant wit". He entered the Anglican clergy and became well known throughout England for his prodigious speaking skills, which kept him moving from town to town for much of his career. Fuller is also significant as he was one of the first Englishmen able to support himself solely through the publican and sale of his written works, which include The Worthies of England, The Historie of the Holy Warre, The Holy State and the Prophane State and his prominent geography of the Holy Land, A Pisgah-Sight of Palestine. The Oxford Dictionary of National Biography describes Fuller's personality,