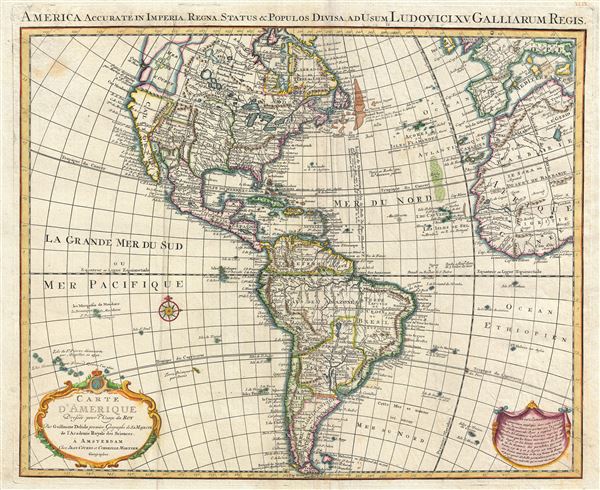 Uncommon map showing the Sea of the West and a Maelstrom in the South Atlantic!
$1,750.00

An uncommon variant on Guillaume Delisle's map of America incorporating theories regarding the Sea of the West. Delisle's map covers both North and South America as well as the West Indies, the Atlantic Ocean, and parts of Africa and Europe, including England, Ireland, France, Italy, and Spain. It is no accident that Delisle chose to include these few Western European nations, for his goal was not only to represent the New World, but to express both connection and continuity with the Old World. To bring this further into context, Delisle includes the Treaty of Tordesillas Line running vertically through the Grand Banks and South America. This line, drawn in 1494 by Pope Alexandre VI (the map incorrectly states 1493), was intended to divide the New World between Portugal and Spain.

This map was first issued by Delisle in 1722 and quickly became one of the most published maps of the 18th century, passing through numerous states and editions. The present example represents the sixth state and a particularly scarce variant, updated to incorporate the Sea of the West - a concept increasing popular among European speculative of positivistic cartographers of the mid-18th century. The Sea of the West is most often presented as a vast inland body of water, often with islands, situated somewhere north of California and west of Lake Winnipeg. It is derived from a combination of wishful thinking, fictitious memoires, and misinterpretation of factual exploration. As presented here, the Sea of the West extends inland from entrances associated with the Strait of Juan de Fuca and Martin de Aguilar, both factual explorers. Aguilar, sailing in 1682, apparently sited a 'rapid and abundant' river that he could not explore because of the swift current and dangerous entrance - could there be a finer description of the Columbia? Be that as it may, European powers, particularly the English and the French, relished the idea of a large inland sea that would enable them to transport their goods, mostly furs, more easily to the rich markets of Asia. As things stood in the mid-18th century, merchants carrying goods had to either sail around South America, risking pirates or worse, or negotiate with the Spanish who operated a lucrative trade route through Mexico to Acapulco, and thence to Asia.

Delisle here even goes so far as to situate the mythical golden city of Quivira on the banks of the Sea - possibly a nod to Aguilar, who was indeed searching for it despite the fact that the actual and disappointing Quivira was situated in the Great Plains (near Kansas) where it was discovered by Franciso Vasquez de Coronado in 1540. Other mythical western kingdoms are also noted, particularly Teguayo, here spelled Teguaio, situated in a mountain valley northwest of Sante Fe. Teguayo was a speculative kingdom of gold first imagined by the missionary Benevides, but popularized a generation later by the Spanish count and con-artist Don Diego Dionisio de Penalosa, who exaggerated the glories of Teguayo in order to further his own political agenda with the Kings of Spain and France.

In South America, Delisle maps the Laguna de Xarayes as the source of the Paraguay River. The Xarayes, a corruption of 'Xaraies' meaning 'Masters of the River,' were an indigenous people occupying what are today parts of Brazil's Matte Grosso and the Pantanal. When Spanish and Portuguese explorers first navigated up the Paraguay River, as always in search of El Dorado, they encountered the vast Pantanal flood plain at the height of its annual inundation. Understandably misinterpreting the flood plain as a gigantic inland sea, they named it after the local inhabitants, the Xaraies. The Laguna de los Xarayes almost immediately began to appear on early maps of the region and, at the same time, almost immediately took on a legendary aspect. Later missionaries and chroniclers, particularly Díaz de Guzman, imagined an island in this lake and curiously identified it as an 'Island of Paradise,'

To the north of the 'Island of Paradise' appeared the 'Puerto de los Reyes' which was considered to be a gateway to the Amazon and the Kingdom of el Dorado. D'Anville, to his credit, shows the 'Laguna' and its island in a much reduced form compared to earlier cartographers and also comments that its existence is 'dubious.'

This map also contains a number of other curious elements, including a maelstrom situated in the middle of the Atlantic Ocean. We have identified no other map to show this curious whirlpool; nevertheless, Delisle is unlikely to have imagined it and no doubt drew it from actual mariner's reports. Interestingly modern scientists have recently identified two massive whirlpools in the South Atlantic. While not permanent these whirlpools are known last several months before dissipating. One can only wonder if Delisle discovered 18th century record of this recently rediscovered phenomenon?

This map was issued by Covens and Mortier for the 1755 edition of the Atlas Nouveau.