1699 De Fer map of America in a Rare Early State 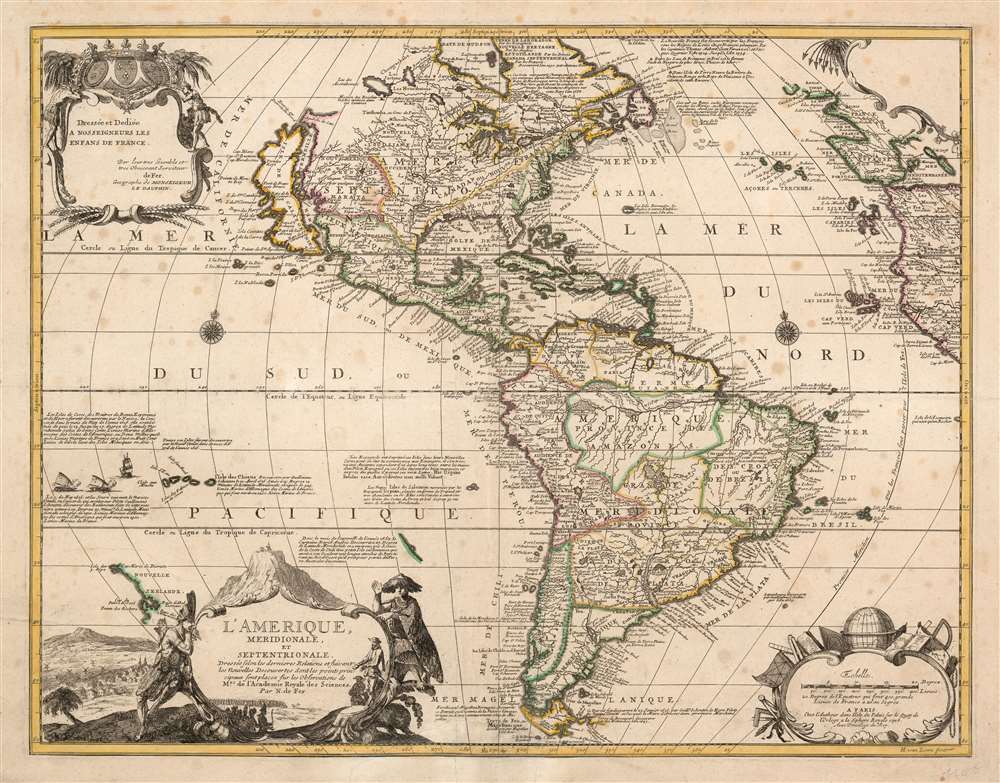 1699 De Fer map of America in a Rare Early State

Rare Early State of an Elegant, French Map of the Western Hemisphere
$3,000.00

This is Nicolas de Fer's 1699 map of America, in a lovely old color example of the second state, printed in 1705. Both of the first two states of this map were separately issued, and are consequently rare. This detailed and richly annotated map, derived from De Fer's own 1698 L'Amerique Divisée Selon Letendue de set Principales Parties, shows the Americas during a period in which France was dominant in the exploration and mapping of North America. Its superb engraving is the work of Harmanus Van Loon, who also engraved De Fer's larger-scale work.

Van Loon's engraving presents the cartographic detail clearly, but does not neglect the decorative content. A sea-battle is depicted in the South Pacific, and there are two elegant compass roses. The map's dedicatory cartouche in the upper left, flanked by native figures, is surmounted with royal arms and fleurs-de-lis; the dedication is to Nosseigneurs les Enfens de France, that is to say the Royal Princes of France, and not French children en masse. The title cartouche on the lower left, also flanked by indigenous figures, is set before a depiction of the mountain of Potosi (the location in Bolivia of the Spanish Colonial silver mint) and its surrounding city and windmills. The map's scales are displayed in the lower right, their cartouche embellished with geographers' tools such as a globe, rulers, maps, pens, and so on. A cartouche in the upper right (decorated with a coconut tree with oddly spear-shaped leaves) is blank in the first four states of the map; it would not receive text until the 1726 Benard state.

DeFer's map displays the Great Lakes and the Mississippi watershed based on state-of-the-art geography of the Academie Royale des Sciences, much of which can be ascribed to Jean Baptiste-Louis Franquelin's firsthand reports. All five Great Lakes are shown; Hudson's bay is properly aligned with them. While their southern reaches are better oriented to the east coast than on the preceding Fr. Hennepin maps, De Fer's mapping of that coast is confused, with a greatly distorted Chesapeake Bay, an archaic John Smith-era treatment of Virginia, and a meager portioning of New England. The Mississippi, much like the Hennepin maps before it, is reasonably accurate despite the mouth being situated too far west (in the vicinity of Galveston Bay) and the placement of the Ohio River too far south. The map contains an early, reasonably accurate delineation of the Missouri River (Outanes R. on the map).

California is shown in insular form, one of the last instances of this prior to the correction of the myth in the early 18th century. The version presented here is often erroneously referred to as the 'Sanson Model.' The term is in fact derived from a 1635 map of the North American Arctic drawn by Luke Foxe. It was Foxe who invented many of the place names as well as added various bays and inlets to northern California. Among these are Talaaago, R. de Estiete, and the curious peninsula extending westward form the mainland, Agubela de Cato. Foxe's sources remain a mystery and his mapping may be based upon nothing more than fantasy, but Sanson embraced the model whole heartedly. Although Sanson did not invent this form of insular California, his substantial influence did popularize it with subsequent cartographers. As is often the case with insular California cartography, the Pacific Northwest is left ambiguous with the interior of Canada occupied by speculative lakes and rivers. There appear to be more concrete reports as well from this region, such as the Recollect mission placed in the vicinity of Lake Winnipeg, ( Assinibouels on the map) far to the west of the locations that are typically understood to have fallen within reach of the Recollect Friars. De Fer places the mission there on his earlier maps as well. In the American southwest, the Rio Grande is shown flowing to the Gulf of Mexico (rather than having it empty into the Gulf of California in the frequent 17th century conflation of this river with the Colorado.

As with De Fer's L'Amerique Divisée Selon Letendue de set Principales Parties, the map contains many text annotations explaining specific geographic features and their history, among them the discovery of the strait of Le Maire, discoveries of islands in the South Pacific, the 16th century French exploration of the coasts of New France by Verrazano, Aubert, and Cartier, and the long history of European fishing off the Grand Banks.

This map is scarce, and rare in its first two states. It was engraved in 1699 and sold as a separate issue until the 1709 publication of the De Fer Atlas ou Recueil de Cartes. While examples of a much smaller De Fer map by the same title appear to be relatively common, we do not see this map in OCLC. We are aware of an early state at the Bibliotheque Nationale, a 1742 state 6 in the Rumsey collection, and an example dated 1727 which appears to be otherwise consistent with state 4 in the Leventhal collection.