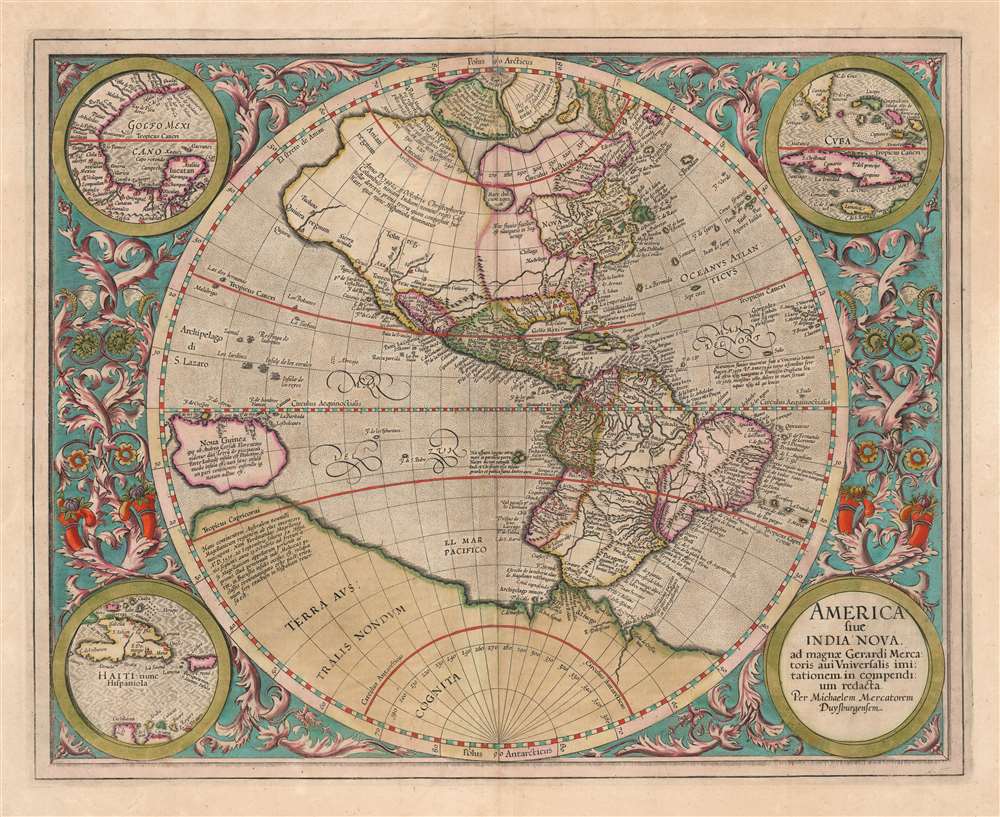 This is a beautifully colored 1613 Hondius edition of Mercator's America, one of the most visually arresting, early maps of the Western Hemisphere.

Michael Mercator has framed his grandfather's geography in a circular border surrounded by intertwined cornucopiae and vines. The circular motif is repeated in the engraving's corners, with four medallions bearing the cartouche and three inset maps depicting the Gulf of Mexico, Cuba, and Haiti. Taken together, it is a unique and artful depiction of arguably the most important new discoveries to be included in the 1595 Mercator Atlas. (Incidentally, this format [circular central maps with corner medallions and acanthus borderwork] is most unusual and evident in only two Mercator atlas maps, both 1595 editions: the present map, and Mercator's iconic Arctic. Although only one of these map bears Michael Mercator's imprint, he was clearly an accomplished engraver, and we must speculate whether he also had a hand in the Arctic map)

The geographical information is likely derived from Gerard Mercator's lost 1569 wall map of America, while the projection resembles that used by Gerard's son Rumold in his 1587 double-hemisphere map of the world. The map’s design and execution were the work of the elder’s grandson, Michael, shortly after Gerard’s death in 1594. The present work is the sole map to bear Michael's imprint - but it is evidently not the work of a beginner. The skill of the engraving speaks to a long apprenticeship under the elder Mercator.

At the time this map was executed, it represented the only map of the Mercator atlas that would be dedicated to the western hemisphere. The 'Mercator/Hondius' maps of the American southeast, the Caribbean islands, and the Strait of Magellan would not be added to the Atlas until it was in the hands of Jodocus Hondius. This being the case, Mercator's inclusion of the Caribbean and the Gulf of Mexico in the three roundels on this map represented the sharpest focus on any specific part of the Americas in the Atlas. Mercator chose to highlight a) the Gulf of Mexico, b) the waters around Cuba, Jamaica, Florida and the Bahamas, and c) the island of Hispaniola. Here, Mercator's use of the place name 'Haiti' is distinctive: the elder Mercator being be the earliest to use it consistently.

This riverside city in the northeast part of North America perpetuated a tale of a mysterious, legendary city. It appeared on many early maps of New England, starting with Verrazano's 1529 manuscript map of America. He used the term, Oranbega, which in Algonquin means 'lull in the river'. The first detailed reference to Norombega appeared in the 1542 journals of the French navigator Jean Allefonsce who discovered and apparently sailed some distance up the Penobscot River, where he encountered a fur-rich American Indian city, to which he applied the placename. Thereafter the existence of the city would be supported by later travelers - Andre Thevet (1502 - 1590) in 1550, and David Ingram in 1562. Ingram, in particular, produced an elaborately embroidered report inspired by the legends of El Dorado, Cibola, and other lost cities. Thus was Norombega established as a fabulous city of riches, inspiring such expeditions as that of Samuel de Champlain (1567 - 1635).

A Hint at the Great Lakes

Upriver from the city of Hochelaga (modern-day Montreal) are a cluster of small lakes, which may be an embryonic Great Lakes. In the interior, near Arctic Canada, is a large lake - here noted as a freshwater sea, 'Mare dulcum aquarium'. This, too, could have been inspired by indigenous reports of the Great Lakes despite its northern position, resembling James Bay or perhaps Lake Winnipeg.

To the extreme north, two of Mercator's four polar Islands appear. The elder Mercator compiled lost Arthurian histories, the accounts of John Davis and Martin Frobisher, whaling reports, the fictional explorations of the Zeno Brothers, and speculation to derive a novel Arctic geography. He imagined four large islands surrounding an open Polar Sea, which could be accessed only by great rivers called the 'inrushing waters'. The currents of these, all of which flowed northwards, were so great that no ship once caught could escape. In the midst of this Polar Sea, he imaged a mighty maelstrom surrounding a high pinnacle of black rock - the Rupes Nigra (here pictured at the pole). Mercator's schematic for the high Arctic remained dominant until the early 17th century discovery of Spitzburgen generated undeniable conflicting cartography.

A massive Terra Australis dominates the Southern Hemisphere, extending from Tierra del Fuego nearly to New Guinea. This imaginary continent capping the South Pole was long supposed to exist by European geographers despite the lack of evidence. It was thought, based upon the writings of Aristotle, that the globe was a place of balances and thus geographers presumed the bulk of Eurasia must be counterbalanced by a similar landmass in the Southern Hemisphere. Many explorers in the 16th and 17th centuries sought the Great Southern Continent, including Quiros, Drake, and Cook, but Antarctica itself was not truly discovered until 1820 when Edward Bransfield and William Smith sighted the Antarctic Peninsula.

Between North America and the imaginary Arctic islands, Mercator's map displays a tantalizing, open sea passage connecting the Atlantic and Pacific. It was hoped that a high-latitude Northwest Passage would provide quick access to the rich markets of Asia, which offered both an outlet for European silver and furs from the American colonies, as well as a source for spices, silks, and other trade goods coveted in Europe. Mercator's maps, as well as those of Münster and Ortelius, depicted such a route, despite no credible report of any such passage. On the other hand, countless explorers would lose their lives in search of the apocryphal route. Today, with the advent of global warming reducing the size of the Polar Ice Cap, a navigable passage has indeed formed.

Mercator's geography was among the most decisive in proposing that Asia and North America were not connected. This was hinted at in the works of Waldseemüller and Münster, but the acceptance of the idea was far from universal: maps by Fine, Gastaldi, Ruscelli, and others showed Asia and America as a contiguous land mass well into the 1570s, after the printing of Mercator's 1569 wall map. Ortelius swiftly adopted Mercator's model in his atlas' maps, and it is arguably these that provided the most leverage in making this model standard - despite the lack of actual evidence of a separation of the continents. Such knowledge was not confirmed until the late 18th century navigations of Captain Cook.

Michael Mercator engraved this map for inclusion in the 1595 Duisberg edition of Mercator's Atlas Sive Cosmographicae Meditationes De Fabrica Mundi et Fabricati Figura. It appeared in the Atlas from the first edition of 1595 until 1633. This example conforms typographically to the 1613, 1623, and 1630 Latin editions. The map appears on the market from time to time. Separate examples are well represented in institutional collections.


Michael Mercator (1567-1600) was a Dutch engraver and mapmaker, grandson of the illustrious Gerard Mercator. Although his work on the 1595 America sive India Nova attests to his skill, he appears to have been largely relegated to assisting his grandfather and his uncle, Rumold. Only that map of the western hemisphere bears his imprint. Learn More...


Jodocus Hondius II (1594 – 1629) was a Dutch engraver, cartographer and publisher. The elder son of the cartographer Jodocus Hondius, Jodocus took over the business after father died in 1612, co-running the business with his brother Henricus II. He was an accomplished engraver, to the extent that upon his death Willem Blaeu would purchase thirty-four of Hondius' plates to be included in his new atlases. Learn More...

Hondius, J. Jr. Atlas editio quarta(Amsterdam: Hondius) 1613.     Mercator's Atlas is one of the most important works in the history of cartography. Although in fact Ortelius was the first to publish a proper atlas, the Teatrum Orbis Terrarum, Mercator's Atlas the first book to employ the term Atlas for a collection of maps. The term is derived both from the mythical titan, Atlas, who was forced to bear the world upon his shoulders, and the Libyan king, philosopher, and astronomer of the same name that, so the legend goes, constructed the first globe. Mercator dedicated the final 25 years of his life to compile the Atlas. He published two parts during his lifetime in 1585 and 1589, but the final part published posthumously by his son Rumold Mercator, in 1595. The map plates for the Atlas were later acquired by Jodocus Hondius who published the most complete and well known edition in 1606. It was Jodocus who popularized the Atlas and who did the most to elevate Gerard Mercator's work.