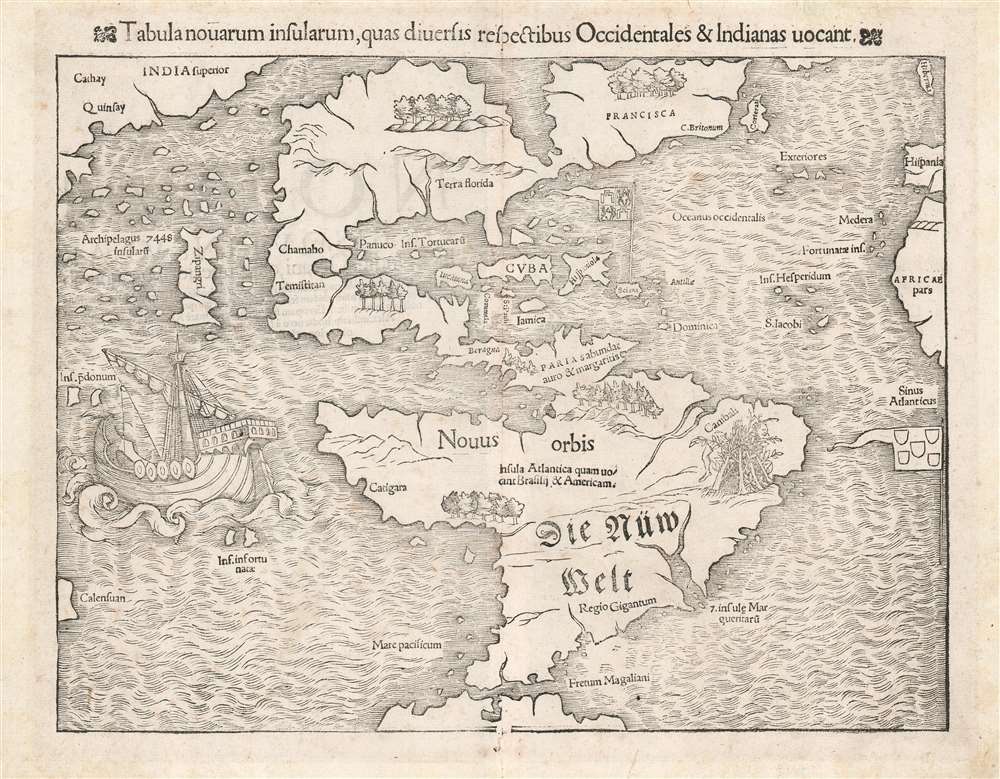 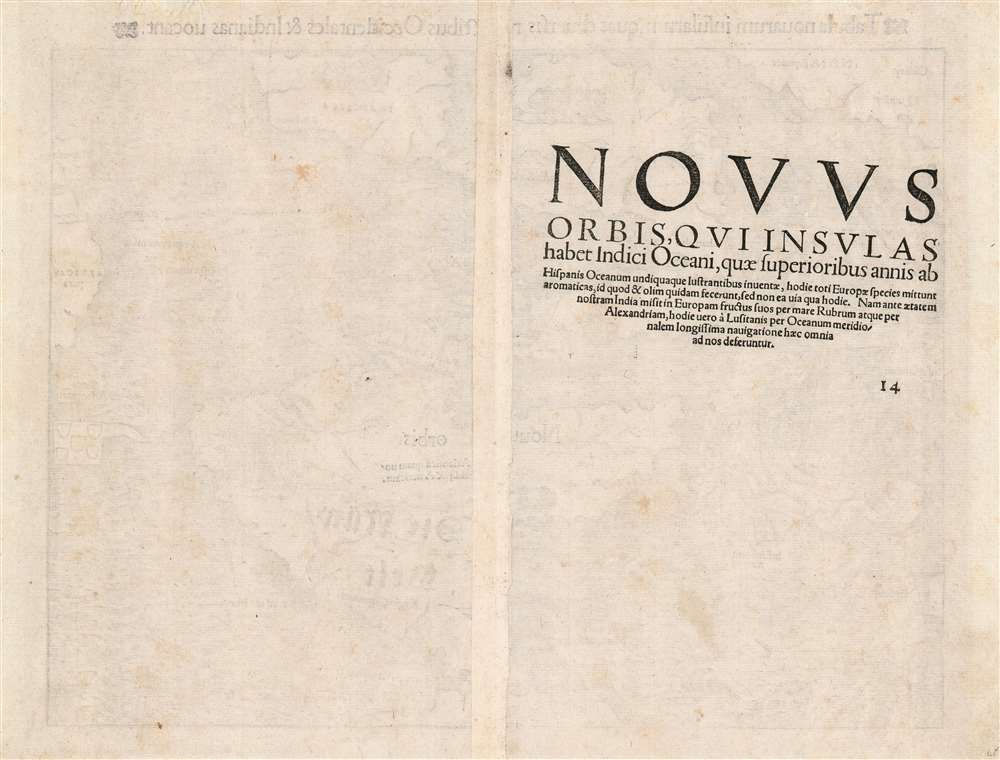 This is an excellent 1552 Latin edition of Sebastian Münster's map of America, the first printed map of the Western Hemisphere. The map first appeared in Münster’s 1540 edition of Ptolemy's Geographia, one of the earliest versions of the classical work to systematically include maps showing contemporary geographical knowledge. Beginning in 1544 it would be included in Münster’s magnum opus, Cosmographia Universalis, which for over forty years would be the primary source of information for anyone who wished to know about the rest of the world: consequently this map would have had a disproportionate impact, providing the first glimpse of the New World to literate laypeople in Europe nearly half a century.

In addition to being the first map to present North and South America as a continuous land mass, this was the first map to name the Pacific Ocean and the Straits of Magellan; it ranks among the earliest acquirable maps to show and name Japan (Zipangri, albeit placed conveniently off the American Pacific coast.) It was the first widely-disseminated map to reveal the discoveries of Verrazano and Cabot, as well.

There being vast gaps in European scholars’ knowledge of the Americas, Münster and any other geographer of his era had to fill in the spaces between his data points with speculation - leading to many of the unusual features of this map. The wedge-like bisecting North America was derived from interpretations’ of Verrazano’s observations during his 1524 voyage; this so-called ‘Sea of Verrazano’ would also appear on Münster’s world map. The Pacific Ocean itself reflects The Yucatan peninsula appears on this map as an island.

The Caribbean region is reasonably well understood: Cuba, Jamaica, St. Paul, Cozumel, Yucatan, Dominica, and Hispaniola. The Castilian flag flies over Puerto Rico (unnamed on this state of the map) and the Portuguese flag appears off the coast of Brazil: these are a reference to the Treaty of Tordesillas, the agreement between Spain and Portugal determining which of the newly-discovered areas belonged to each kingdom. In North America, the Florida peninsula is recognizable, although the entire region of the souytheast is identified as 'Terra Florida.' Further north, another territory, defined as Francisca, is identified - applying Verrazano’s term for the lands his expedition surveyed. This appellation was in honor of Francis I, the French King who sponsored Verrazano's expedition. 'C. Britonum' is a reference to Cabot's expedition and is most like Cape Breton. The nearby island of Corte Real is possibly ’Terra Nova do Bacalhau’ (New Land of the Codfish) supposedly discovered by the Portuguese navigator Joao Vaz Corte-Real in 1473.

South America is more recognizable. This map (tied with Münster’s world map) is the first acquirable to name and show the Straits of Magellan; a lovely sailing ship in the Pacific is likely in honor of Magellan’s flagship Victoria. Catigara, a city typically located in East Asia by Ptolemy, has here been relocated to the western coast of South America, near modern day Peru. Thanks to Vespucci’s popular and sensational accounts of the New World, if scholars knew anything about South America it was that it was full of cannibals. Consequently the region of Brazil is decorated with a primitive lean-to festooned with a human head and leg, labeled ‘Canibali.’ Patagonia is identified as ’Regio Gigantum’ (the Kingdom of Giants) in reference to the ten-foot-tall giants reported by Magellan’s survivors.

As noted before, this is the earliest printed map (tied with Münster’s own world map) to use the term 'Pacific' to describe the Ocean to the west of America. Munster most likely theorized that this ocean was an extension of Ptolemy's Indian Ocean - a fact also suggested by his placement of 'Catigara.' Into this largely unexplored ocean he introduces the Ins. Pdonum: according to Suarez, this is a corruption of Magellan's 'Ladroni' or 'Thieves' Island', today's Guam and Rota. Münster also identifies 'Calensuan,' which Suarez suggests one of the islands visited by Magellan's crew after the man himself was slain on Cebu. Further north, an archipelago of 7448 islands surrounds 'Zipangri.' This is Japan, as referenced by Marco Polo. This is among the earliest appearances of Japan on a printed map, and in its first edition of 1540 predated any European contact with the island nation.

The present example represents the 5th state of Munster's map, prepared for the 1550 and 1552 Latin editions of the Cosmographia. Only examples of this state appear separately in OCLC, one of which is identified as the 1552 issue and is held at the Newberry Library. In its various other states, the map is well represented in institutional collections.