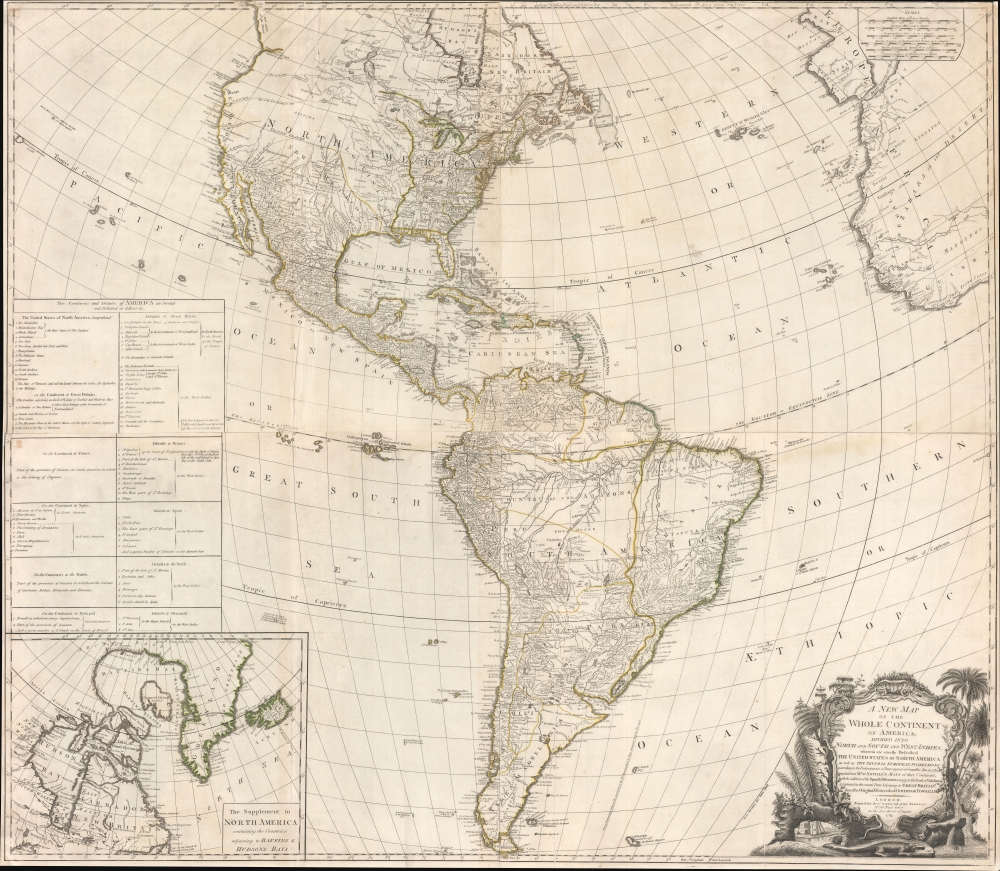 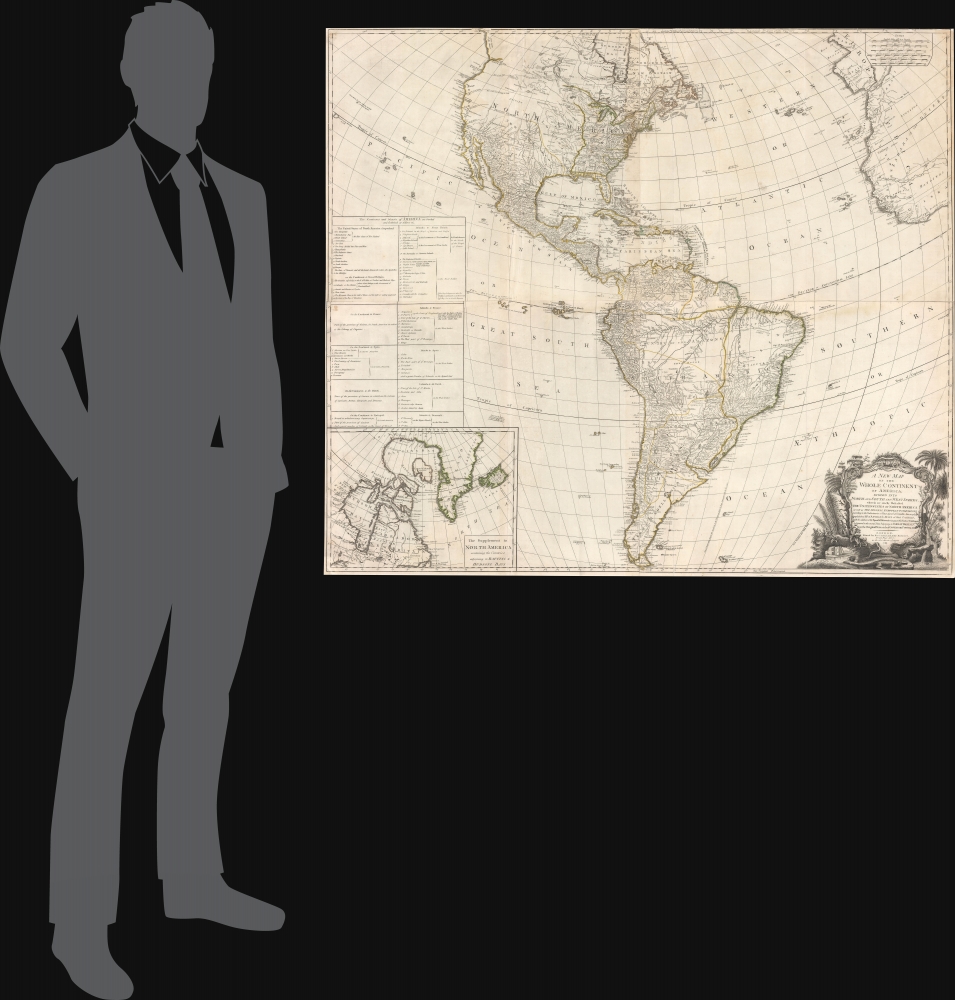 A scarce 1783 Sayer and Bennett wall map of America issued shortly after the American Revolutionary War (1775 - 1783). This map followed closely on the Treaty of Versailles, which ended the Revolutionary War and established British recognition of the independent United States. The core cartography, although much updated, is derived from J. B. B. D'Anville, and embraces South America, Central America, the West Indies, and most of North America, excepting only the little understood Arctic.

This is the first issue of this map to name the United States - here including all territory north of Florida, South of the Great Lakes (except Michigan), and east of the Mississippi. The former colonies, now states, hug the coast with largely indistinct western boundaries giving way to long-established American Indian Nations. The ruins of various forts dating to the French and Indian War (1754 - 1763) line the Mississippi. This map also incorporates the new political boundaries formed by said treaty, including Spanish Louisiana (1762 - 1801) and Spanish Florida (1783 - 1821). Other data, particularly in the mid-Atlantic, is drawn from the records of Governor Thomas Pownall.

In the Transmississippi, geography is less distinct. The cartographer has included two speculative routes for the equally speculative River of the West, one from Lake Winnipeg, and a more southerly route from a mysterious 'Pike's Lake'. A mountain chain, identified as 'Mountains of Bright Stones', likely refer to indigenous accounts of the Rocky Mountains. Further north the map includes George's Sounds, from Cook's voyage of 1778, and the legendary Chinese colony of Fou Sang.

Along the coast of modern-day British Columbia, in an unexplored zone identified by a ghosted lines, the postulated Chinese colony of Fusang is identified. Fusang or Fousang is a region first documented by the Chinese Buddhist missionary Hui Shen in the 5th century. Hui Shen describes a land some 20,000 Chinese Li (c. 8000 km) east of the China coast. Fousang is described in considerable detail in the 7th century Book of Liang by Yao Silian. There are also accounts that the land was settled c. 220 BC by a Chinese Emperor of the Han Dynasty. In later days Fusang was commonly used in Chinese poetry to designate Japan, however earlier references keep it distinct. In any case, Hui Shen's description of Fusang with regard to distance and geography corresponds more with the coastlands of North America than with Japan. The French historian Joseph de Guignes in his 1761 article Le Fou-Sang des Chinois est-il l'Amerique? promoted this idea. Cartographers of the era, including Buache de Neuville, Zatta, Robert de Vaugondy, and others, embraced the idea and it was included in many subsequent maps of the region.

A large inset map in the lower left details the Arctic in the vicinity of Hudson Bay, Baffin Bay, and Greenland. It is significant that Baffin Bay is presented as a large, closed bay. Although the cartographer notes that the western shores are 'coasts unknown', he definitively walls off the western shore with mountains, pointedly NOT hinting at a Northwest Passage.

Here the geography of South America is much improved with may speculative elements commonly to earlier maps removed. In Guiana, the legendary Lake Parima is replaced with the factual Lake Amuku. Likewise, Lake Cassipa, also commonly associated with Parima, is correctly mapped. Further south, Xarayes, another mythical lake, remains the northern limits of the Paraguay River. The lands between the Amazon River and Paraguay, and between the Andes and coastal Brazil, are left largely blank, underscoring the vast and unknown 'Country of the Amazons.'

This map went through a long a complicated publication history. It was first issued by John Gibson in 1763 and was subsequently updated regularly to about 1799. The present 1883 edition is the first to recognize the United States and the last to bear the 'Sayer and Bennett' imprint. This map is well represented institutionally but scarce in this edition.


John Bennett (1746 - December 8, 1787) was an English map publisher. He was born in Derbyshire, the son of Tideswell shoemaker Samuel Bennett. He moved to London around 1761 to take work as a servant to the mapmaker Robert Sayer (1725 - 1794). In 1765, he became Sayer's formal apprentice. Bennett entered the Free Stationers guild on June 7, 1774. Bennett and Sayer continued to work together on the understanding that, in time, Bennett would acquire equity in the firm. This occurred in 1777, when the firm was renamed 'Sayer and Bennett'. For the next several years, they ran one of the most prolific map and printmaking firms in Europe. Bennett began to show signs of mental instability around 1781 and by 1783, was admitted to an asylum in Clapton. The causes are unknown, but mercury poising is a real possibility. Sayer petitioned to dissolve the partnership in 1784 and by 1785 there are no further publications bearing the 'Bennett' imprint. He died in Islington in 1787. Learn More...


Thomas Pownall (1722 - February 5, 1805) was a British scholar, statesman and soldier active in the colonial administration of North America just prior to the American Revolutionary War. Pownell was born in England and educated at Trinity College, Cambridge. After graduation he was employed by his brother, John Pownall, at the office of the Lord's Commissioners of Trade and Plantations, which oversaw British economic interests in its North American colonies. In 1753, Pownall was appointed secretary to the governor of New York, Sir Danvers Osborne. Osborne, himself having be only recently appointed to the position, committed suicide shortly after taking office. Despite this setback, Pownall remained in America and devoted himself to studying and researching the colonies. In the process Pownall became close lifelong friends with Benjamin and other New World luminaries. He also published several notable works on the colonial administration of North America. In 1757 Pownall was appointed Governor of the Massachusetts Bay colony. In this position he frequently found himself at odds with the restrictive policies of the Board of Trade. It was not long before he was pushed out of office and, declining the governorship of Jamaica, reassigned to South Carolina. Despite nominally holding the governorship of South Carolina, Pownall never visited the colony. Instead he returned to England where he eventually became a member of Parliament. In Parliament, he advocated for reduced taxes towards the colonies - had he been heeded, the American Revolution may have never happened. Pownall retired from public life around 1780, but continued to pursue his scholarly interests. Pownall's research contributed significantly to several important maps and scholarly work on North America. Learn More...