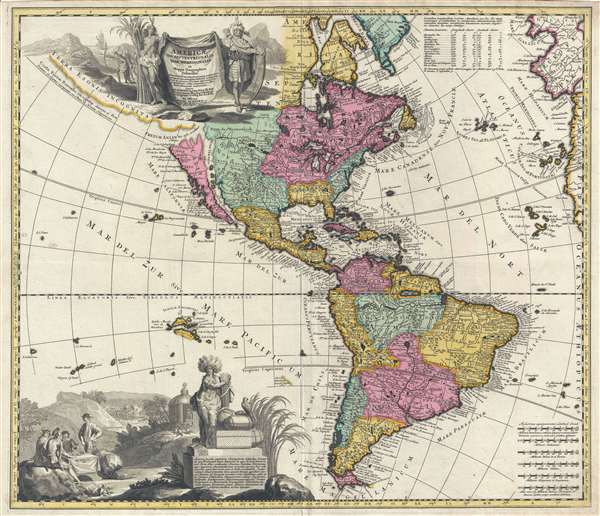 The most beautiful old color example of Zurner's transitional map of America we have seen!

Probably the most beautiful old color example of Adam Friedrich Zurner and Pieter Schenk's 1709 map of the Americas. The map covers all of North America and South America, with California as an island, as well as much of the Pacific and the Atlantic, inclusive of parts of Africa and Europe. Zurner's map reconciles some of the most up to date cartographic 'knowns' of the time with rampant cartographic speculation.

Zurner prominently features California as an Island on the second Sanson model. The idea of an insular California first appeared as a work of fiction in Garci Rodriguez de Montalvo's c. 1510 romance Las Sergas de Esplandian, where he writes

Baja California was subsequently discovered in 1533 by Fortun Ximenez, who had been sent to the area by Hernan Cortez. When Cortez himself traveled to Baja, he must have had Montalvo's novel in mind, for he immediately claimed the 'Island of California' for the Spanish King. By the late 16th and early 17th century ample evidence had been amassed, through explorations of the region by Francisco de Ulloa, Hernando de Alarcon and others, that California was in fact a peninsula. Nevertheless, by this time other factors were in play. Francis Drake had sailed north and claimed 'New Albion' (Nova Albion, identified here on the northwest coast of California Island) near modern day Washington or Vancouver for England. The Spanish thus needed to promote Cortez's claim on the 'Island of California' to preempt English claims on the western coast of North America. The significant influence of the Spanish crown on European cartographers caused a major resurgence of the Insular California theory. Just before this map was made Eusebio Kino, a Jesuit missionary, traveled overland from Mexico to California, proving conclusively the peninsularity of California, nonetheless, the European cartographic establishment was slow to adapt. In this case the northeastern part of the island of California is ghosted in, suggesting both that this area had not been fully explored and Zurner's doubt regarding the true coastline.

The map also exhibits a curious angle on the Lahontan discoveries. Louis Armand, Baron de Lahontan (June 9, 1666 – c. 1716) was a French nobleman and military officer who traveled extensively in the Upper Mississippi Valley. Lahontan's travelogues were extremely popular in Europe and exerted an outsized influence on cartography, despite being unverified and today the subject of much debate. Lahontan describes ascending a tributary of the Mississippi he calls the Longue River. Following the Longue River he passes several tribes before reaching a lake or an expansion of the river, after which it changes to the Riveiere Morte (River Death). The ends in a mountain range (the Rocky Mountains?) beyond which is a great salt lake, the land of the 'Mozeemlek,' and a passage to the western ocean (the Pacific). Lahontan's discoveries are much debated, some claiming they are entirely fictional and others granting them a seed of truth. Here Zurner associates the Longue River with the Missouri, calling it the Moingona. Beyond, the River Death extends to a mountain range, and a portage, beyond which is another river and the land of the 'Moozemleck.' The 'Moozemleck' lands abut the strait of Anian – another fictional location prevalent on many older maps, this time situated north of insular California and south of the apocryphal proto-Aleutians, Gamaland.

South America offers much of interest including the mythical Lake Parima, in Guiana. The legend of Parima is associated with the English adventurer Sir Walter Raleigh's search for El Dorado. Believing El Dorado to lie in the northern part of the Amazon, Raleigh sailed down the Orinoco River just before the onset of the rainy season. Reaching a remote tribal village, Raleigh noted canoes arriving bearing gold, silver, and other treasures. Asked where the gold came from, the natives replied, 'Manoa', the term for the tribe to which the river traders belonged. Manoa, the natives claimed could be reached following a long river voyage southward to a Great Lake, called Parima. Raleigh and his associates immediately associated Manoa and Lake Parima with the golden kingdom of El Dorado, though they never visited the city or lake. Subsequent maps, including this one, mapped el Dorado and Lake Parima in this location for several hundred years. Both Raleigh and the natives were describing an actual event known to occur annually in the region. Rains would annually swell the Amazon and Orinoco river systems creating a linkage in the Rupununu flood plain, which, during heavy rains, can resemble a massive lake. The Manoa were a large and populous trading nation active in pre-colonial days, whose vast empire, based in the Amazon Basin, extended form the Andes to the Orinoco. Sadly the Manoa and many of the other populous South American indigenous nations noted by the earliest explores to the region vanished, brought low by European epidemics.

Also in South America, the Laguna de Xarayes appears as the source of the Paraguay River. The Xarayes, a corruption of 'Xaraies' meaning 'Masters of the River,' were an indigenous people occupying what are today parts of Brazil's Matte Grosso and the Pantanal. When Spanish and Portuguese explorers first navigated up the Paraguay River, as always in search of El Dorado, they encountered the vast Pantanal flood plain at the height of its annual inundation. Understandably misinterpreting the flood plain as a gigantic inland sea, they named it after the local inhabitants, the Xaraies. The Laguna de los Xarayes almost immediately began to appear on early maps of the region and, at the same time, almost immediately took on a legendary aspect. Later missionaries and chroniclers, particularly Díaz de Guzman, imagined an island in this lake and curiously identified it as an 'Island of Paradise,'

To the north of the 'Island of Paradise' appeared the 'Puerto de los Reyes' which was considered to be a gateway to the Amazon and the Kingdom of el Dorado. Zurner, to his credit, shows the 'Laguna' and its island in a much-reduced form compared to earlier cartographers and also comments that its existence is 'dubious.'

There are two arresting allegorical cartouches located in the upper and bottom left corners. The upper cartouche, bearing the map's title and imprint feature stylized American Indians holding a fur better while their compatriots hunt jaguar in the background. The lower cartouche features an American Indian woman with an elaborate headdress in the foreground. In the midground Europeans feast on the fruits of the new work, while in the background, indigenous peoples worship at a Pagan temple.

This map was prepared to replace Schenk's earlier map of 1696. It first appeared, as here, in the 1709 edition of Schenk's Atlas Contractus sive Mapparum Geographicarum Sansoniarum and later in some composite atlases. As stated in our opening remarks, this is the most beautiful example of this map we have seen anywhere. If you are thinking of adding an example to your collection, this is the one you want.

Adam Friedrich Zürner (1679 - 1742) was a German engraver, pastor and scientist based in Dresden Germany. His is known to have worked with the Homann Heirs firm as well as several other cartographic firms of the era. His cartographic work primarily focuses on Saxony and parts of Germany. Learn More...