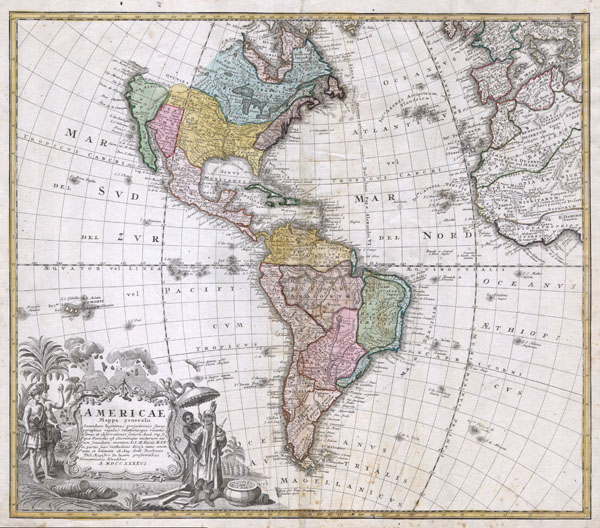 A stunning 1746 Homann Heirs hand colored map of both North and South America. This is the second issue of this important map following the earlier edition by J. B. Homann. Map reflects a considerable advancement in American cartography of the time as well as a general increase in knowledge regarding America's interior from explorations and colonizations. Map immediately precedes the French and Indian War, so the French are shown to dominate North American while the Spanish are preeminent in the south. The Pacific Northwest is largely unexplored, but nonetheless, the mythical Northwest Passage is shown. As is the mythical Quivira, 'Land of Gold and Silver,' sought after by conquistador Francisco de Coronado in 1541. The beautiful decorative title cartouche in the lower left quadrant depicts two erupting volcanoes and several American Indians, one of which is seems to be holding aloft a shrunken head or similar idol. An important early map of the Americas. This map was included in the 1752 Homann Heirs Maior Atlas Scholasticus ex Triginta Sex Generalibus et Specialibus…. Most early Homann atlases were 'made to order' or compiled of individual maps at the request of the buyer. However, this rare atlas, composed of 37 maps and charts, was issued as a 'suggested collection' of essential Homann Heirs maps. A fine copy of an important map.

Very good condition. Minor discoloration on centerfold. Two flattened creases, one left of the centerfold, the other bisecting the Atlantic Ocean, neither are prominent when laid flat. Minor foxing confined to extreme margins. Blank on verso.