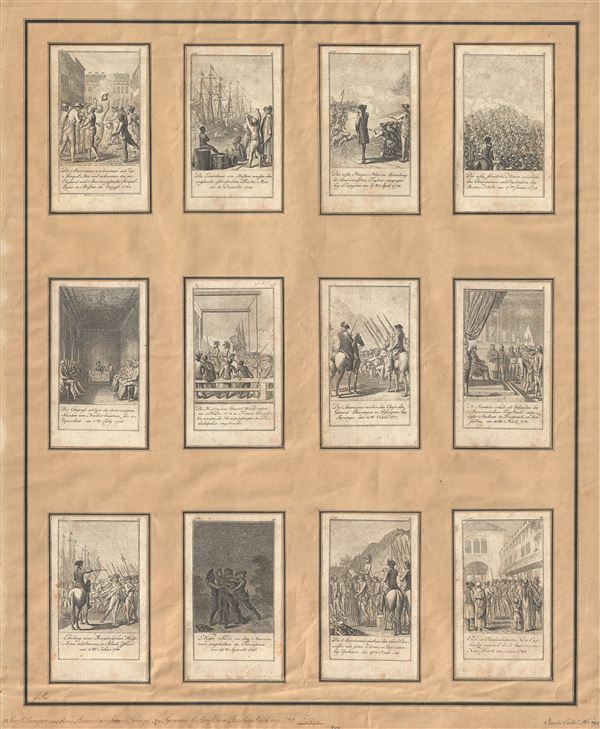 Among the first printed illustrated views of the American Revolutionary War.

The full set of Chodowiecki's twelve 1784 card views illustrating the American Revolutionary War. Chodowiecki's twelve engraved images are among the first printed illustrations of the events in the colonies and were intended to capitalize on German popular interest in the American Revolution. These views were issued both as cards - such as the present example - and as illustrations in Matthias C. Sprengel's Historisches Taschenbuch. All examples were drawn by Chodowiecki and engraved by Daniel Berger. All cards from the Choloweicki series are extremely scarce, almost never appearing on the market and present in only a few institutional collections. A full set is practically unheard of making this a once in a lifetime collecting opportunity.

The cards, numbered from 1 - 12, follow the course of the Revolution from the initial protests over the Stamp Act to the last shot, fired by British ship cannons on the 1783 evacuation of New York:

Die Americaner machen das Corps des General Bourgoyne ... This card, the seventh, illustrates the surrender of General Burgoyne at Saratoga, a decisive event this Continental victory is considered to be the turning point in the American Revolutionary War. Cresswell 275.

Daniel Nicholas Chodowiecki (October 16, 1726 - February 7, 1801) was a Polish-German engraver and painter active in Berlin during the second half of the 18th century. Chodowiecki was born in Danzig (Gdansk), Poland of a middle class Huguenot family. When is father passed away Chodowiecki relocated to Berlin, Germany. In 1764 he enrolled in the Berlin Academy where he mastered drawing, engraving, and printmaking. By 1788 he had become Vice-Director of the Academy. He rose in prominence as one of the finest graphic artists of his day, producing a broad corpus of work that ranged from political commentary to literary and scientific illustration. In printmaking, he is credited with the invention of the deliberate remarque, a small sketch on a plate, lying outside the main image. These were originally little sketches or doodles by artists, not really meant to be seen, but Chodowiecki turned them into "bonus items" for collectors. He was exceptionally known for his trade card size miniatures which he issued serially on topic ranging from Shakespeare to the French Revolution. Historically, his most important work is most likely his 12 card set illustrating the events of the American Revolutionary War which rank among the earliest printed images of the war. Learn More...


Gottfried Daniel Berger (October 25, 1744 - November 17, 1825) was a German engraver. Born in Berlin, Berger was the son of Friedrich Gottlieb Berger who was also an engraver. In 1757 Berger was being instructed by the French painter Blaise Nicholas Le Sueur, who at the time was the director of the Prussian Academy of Arts. In May 1774, his training was further supplemented by Georg Friedrich Schmidt until the artist's death eight months later. Berger received professional support from Le Sueur, who provided contacts with influential figures including the painter and director of the Sanssouci Picture Gallery Matthias of Austria, the bank director and art connoisseur Carl Philipp Caesar, anatomy professor Johann Friedrich Meckel, and artist Daniel Chodowiecki. Berger received numerous important commissions, such as the production of illustrations for medical and biological works or reproductions of paintings. By 1778, Berger was a full member of the Academy of Arts, and in 1787 he was inducted into the rectorship and was appointed professor of engraving. In 1816, Berger became Vice Director of the Academy. He died November 17, 1825 in Berlin. Learn More...

Very good. Mounted on 19th century (easily removable by a restorer) paper with French style manuscript borders. Individual cards exhibit some toning, else fine examples. Given size as depicted above.

Cresswell, D., The American Revolution in Drawings and Prints, p. 125, no. 343. Boston Athenum, Prints and Photographs, AA B64N48 Hi.(no.1). Exhibited in: 'Creating the United States' at the Library of Congress, Washington, D.C., 2011.
Looking for a high-resolution scan of this?