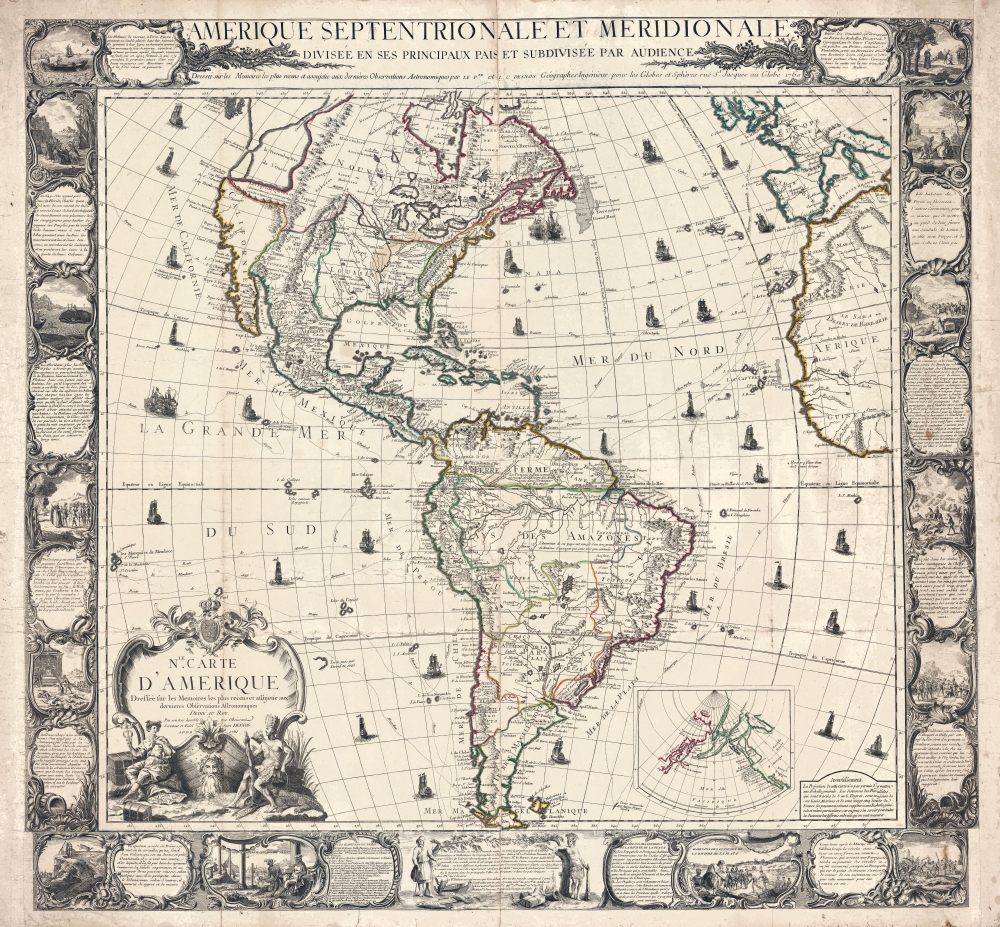 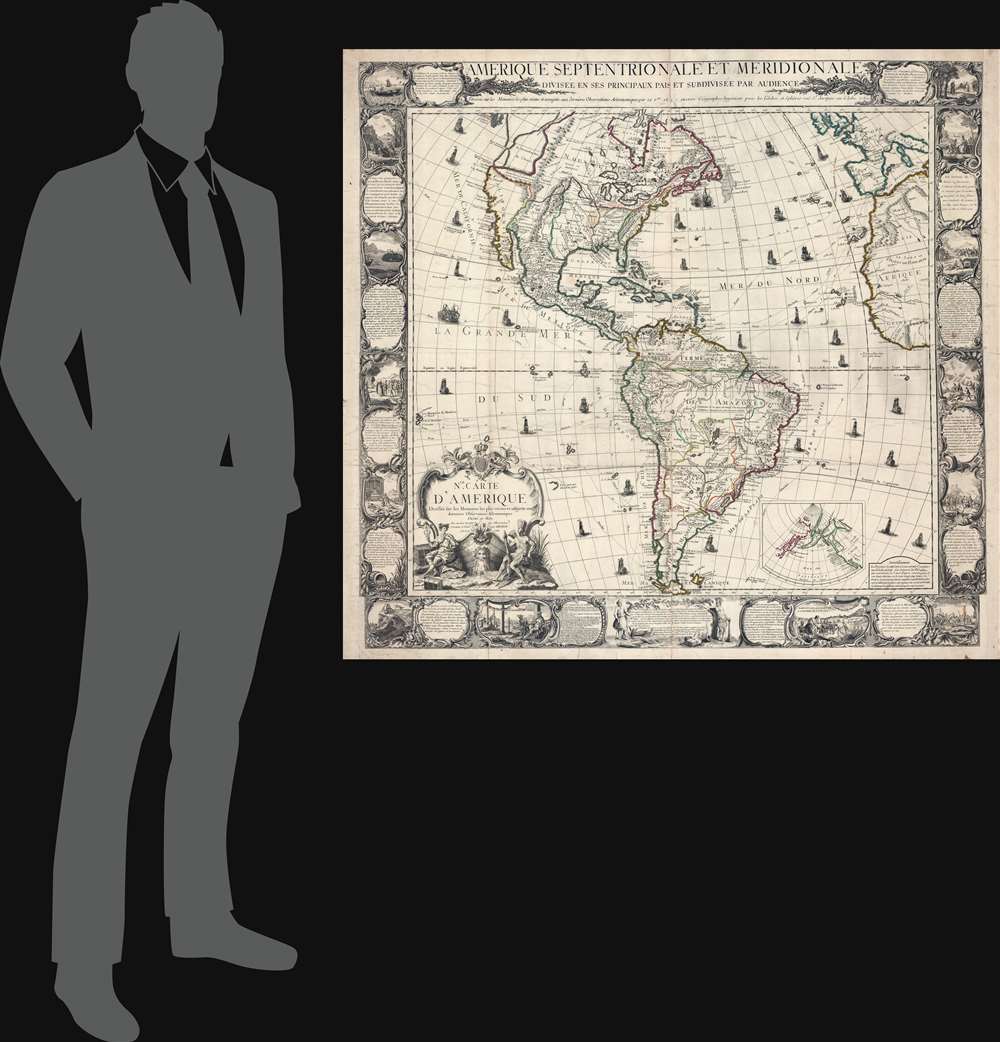 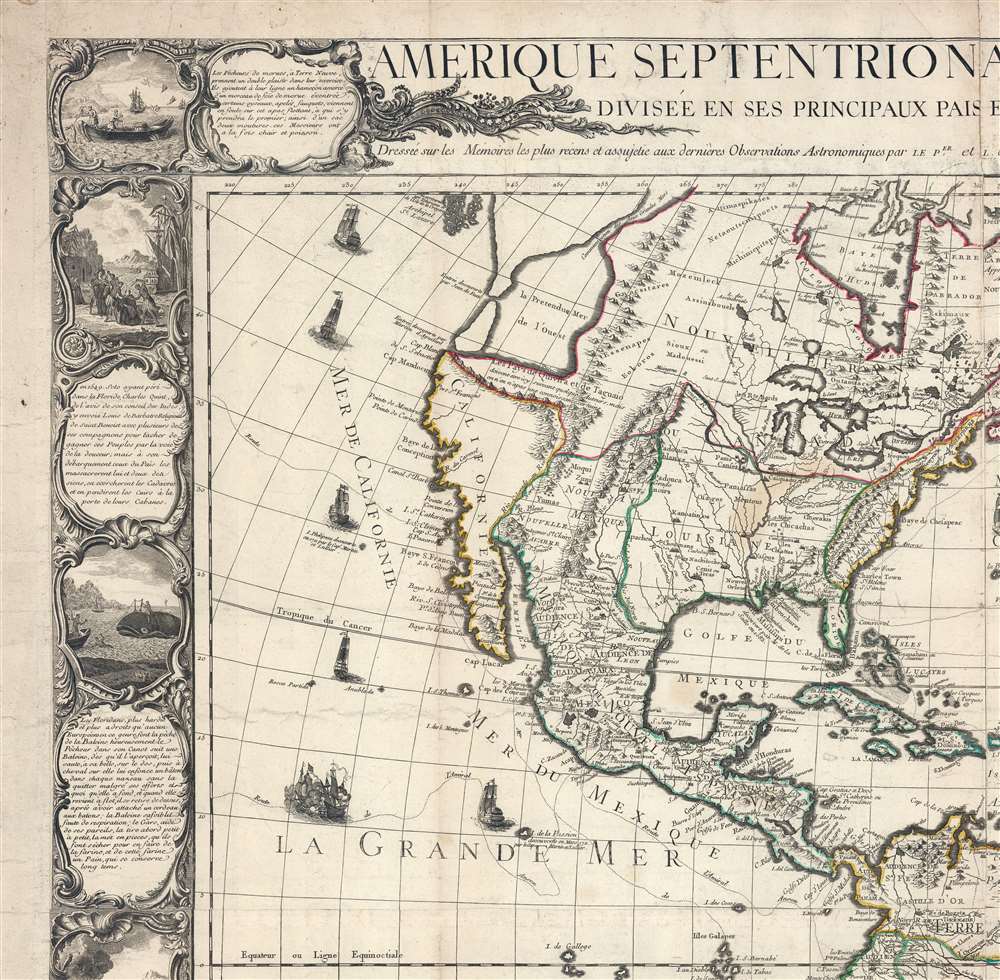 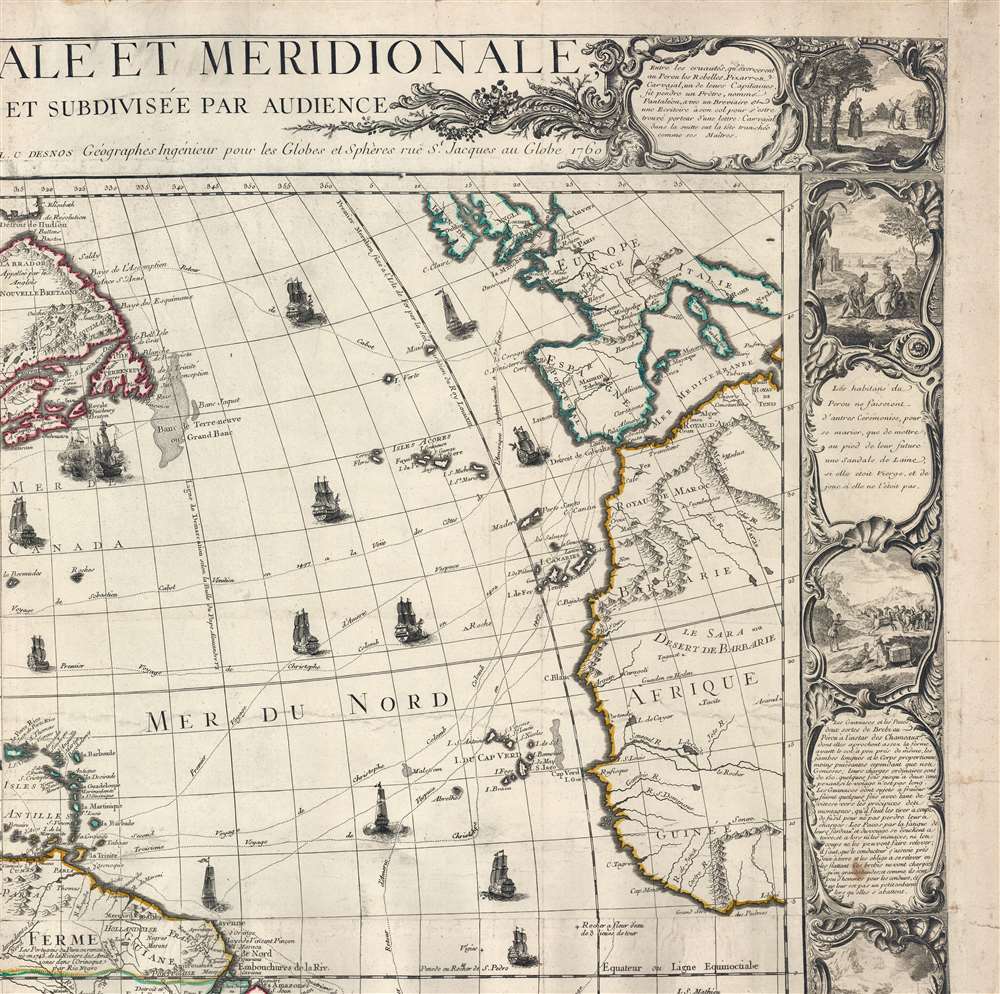 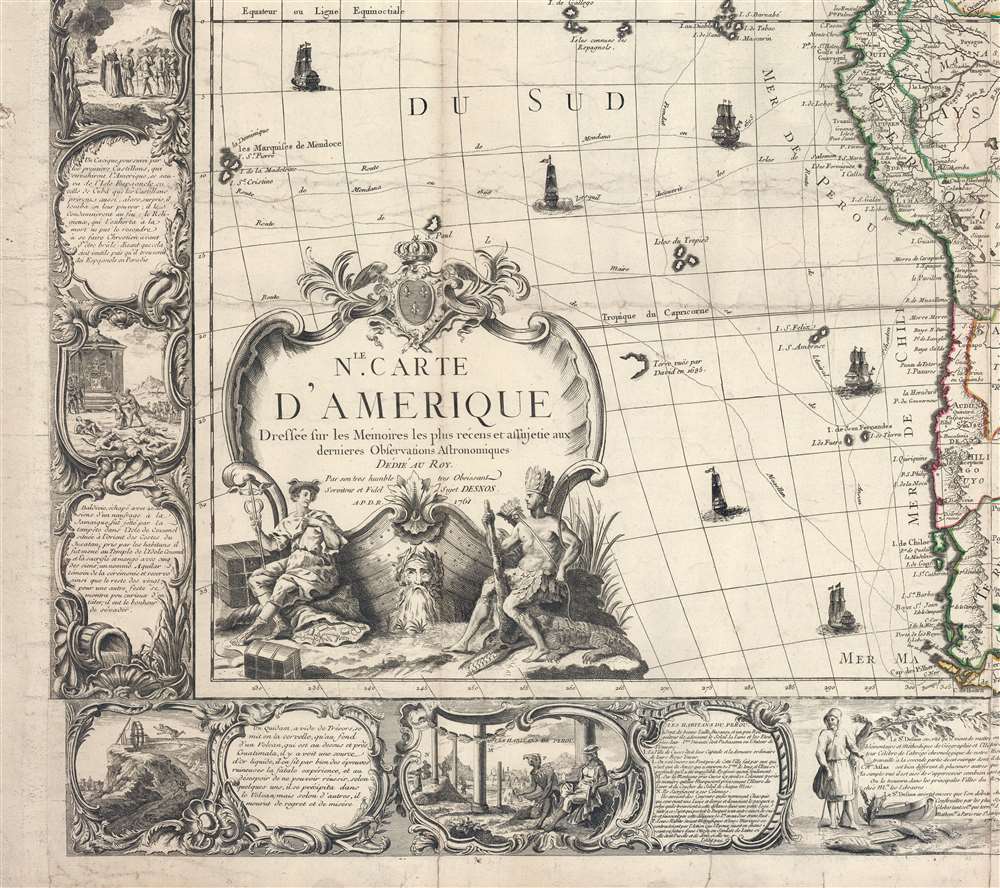 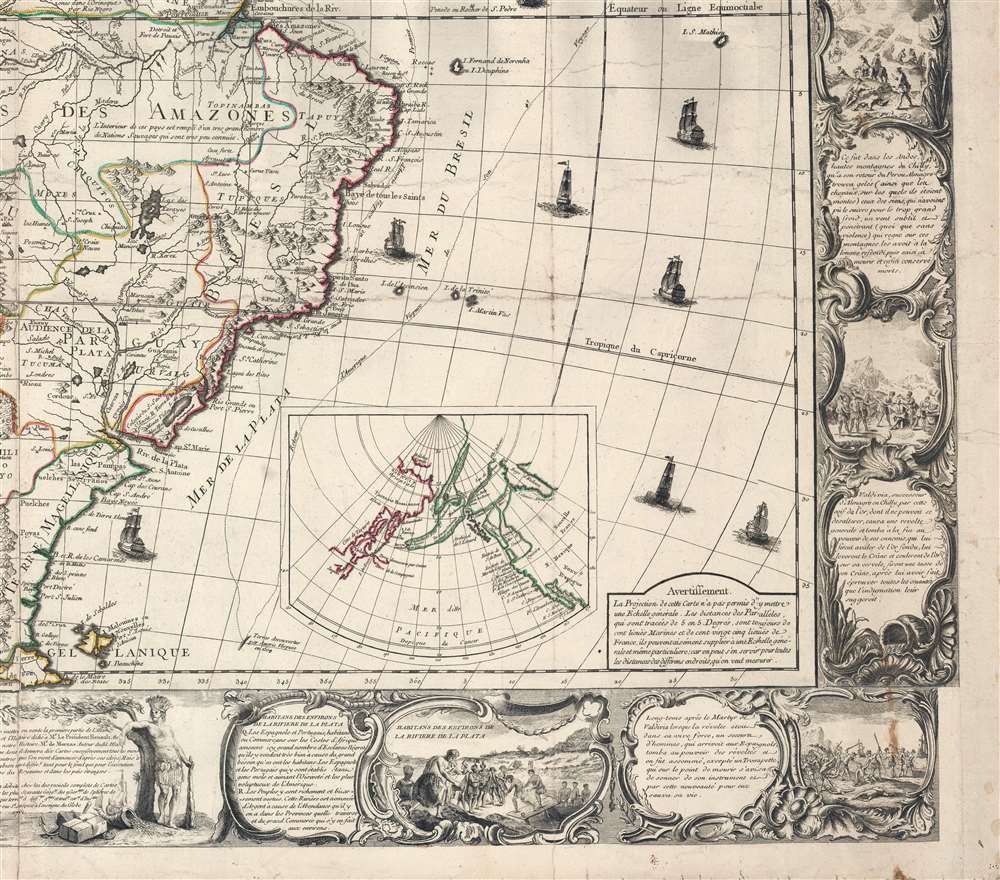 A rare and highly decorative 1761 French wall map of America issued by Louis Charles Desnos. The map covers all of America, from the northern reaches of Hudson Bay to Tierro del Fuego - which just breaks the lower border. Items of note include a bold but 'alleged' Sea of the West (Mer d l'Ouest) and a large 'Lac des Zarayes' in South America. An inset in the lower right details the Pacific Northwest and the Bering Strait, incorporating the Sea of the West with the Apocryphal voyages of Admiral Bartholomew de Fonte and the Chinese legends of an American colony named 'Fusang'. A wealth of ships fill the seas as well as nautical routes by famous explorers. The whole is surrounded by a strikingly engraved border illustrating the indigenous peoples of the Americas - frequently in the processes of martyring missionaries and worshiping idols, but also engaging in trade, fishing, and other more mundane activities.

Wall Maps and the Intelligentsia

From the mid 17th century though the late 18th century, it became fashionable for European merchants, aristocrats, and intelligentsia to hang large decorative wall maps in their offices and showrooms. Some even had dedicated map rooms. Such maps typically featured the most up-to-date cartographic ideas and represented cosmopolitan humanistic values, but were also intended as objects of beauty, often featuring elaborate vignettes, fine engraving, allegorical cartouches, and striking figural border work. These maps were not just geographical references or artwork, they were symbols of knowledge and mechanisms of power. Displaying a map suggested that not only could one look on the world, they could control it. Such maps also featured prominently in the work of 17th century Dutch painters, the most famous of which is Johannes Vermeer (1632 - 1675), although he was hardly alone in incorporating maps into his painting.

A great inland sea is a regular if quirkily feature in maps American Pacific Northwest dating to the mid to late 18th century. This massive and apocryphal sea, generally referred to as the 'Sea of the West' or 'Mer d'Ouest', can trace its origins to the great French cartographer Guillaume De L'Isle (1675 - 1726). De L'Isle himself never published a map incorporating a 'Sea of the West', - suggesting that he himself was skeptical of it - but a manuscript map illustrating this feature did appear in his notes. It may be that De L'Isle was inspired by a c. 1630 Thames school manuscript map, now located at Yale, that features a geographically similar body of water described as a 'Branch of the South Sea', possibly a revisionist perspective on Verrazano's Sea. The earliest printed map to include the Sea of the West was probably Jean-Baptiste Nolin’s 1742 L’Amerique ou le Nouveau Continent. It has been suggested that Nolin copied the relevant cartography from De l’Isle's manuscript, but it more likely that information about the 'sea' verbally leaked, as Nolin's sea does not resemble De L'Isle's in any significant way. The first publication of the 'Sea of the West' a la De L'Isle appeared when Joseph Nicholas (1688 - 1768), going through his deceased elder brother's notes discovered the aforementioned manuscript map. At the time Joseph Nicholas had been working in St. Petersburg with the Tsar's Academy of Sciences, and had new information absconded from suppressed records of the Vitus Jonassen Bering (1681 - 1741) expedition that he was keen to publish before an official map was released. In 1752, Joseph Nicholas partnered with Philippe Buache (1700 - 1773) to do just that, using Guillaume De L'Isle's posthumous notes to fill in the American side of the map. The Buache/De L'Isle map featured an accurate Siberian Arctic from Bering, but in the Americas included a monumental 'Mer d'Ouest' or bay suggestive of a viable Northwest Passage. Although De l’Isle and Buache were immediately accused of fraud, the Sea of the West appeared on many maps – some editions even post-dating Cook.

The legends of Bartholomew de Fonte's discoveries are illustrated in the inset map appearing in the bottom right. The tale of De Fonte' discoveries in the American Northwest had an enduring influence on cartographic representations of America through the second half of the 18th and into the early 19th century. The De Fonte legend first appeared in a 1706 English magazine entitled Memoirs of the Curious, wherein was published a previously unknown account by a supposed Spaniard, Admiral Bartholomew de Fonte. De Fonte is said to have sailed up the Pacific coast of North America in 1640. On this voyage he 'discovered' a series of gigantic lakes, seas, and rivers heading eastward from the Pacific towards Hudson Bay. The De Fonte story relates how, on one of these great inland lakes, he met with a westward bound ship from Boston that must have come through the Northwest Passage. At the same time, De Fonte sent one of his sub-captains, Pedro Bernarda, northward to explore a 'beautiful river with deep calm waters.' This sub-exploration led to the discoveries of Lake Valasco, R. Bernarda, and Lac Bernarda - as seen here. Today, based upon inaccuracies and falsities, most believe the entire De Fonte legend to have been a fabrication. Nonetheless, it set 18th century Europe afire with speculation that a Northwest Passage must indeed exist. Even such luminaries as Benjamin Franklin wrote long defenses of De Fonte.

The inset also illustrates the Chinese colony of Fusang (扶桑) on an island near modern-day British Columbia. Fusang or Fousang is a region first documented by the Chinese Buddhist missionary Hui Shen (慧深) in the 5th century. Hui Shen describes a land some 20,000 Chinese Li (c. 8000 km) east of the China coast. Fousang is described in considerable detail in the 635 CE Book of Liang (梁書) by Yao Silian (姚思廉; ??? - 637). There are also accounts of how Fusang was settled c. 220 BC by a Chinese Emperor of the Han Dynasty. In later days, Fusang was commonly used in Chinese poetry to designate Japan, however earlier references keep it distinct. In any case, Hui Shen's description of Fusang with regard to distance and geography corresponds more with the coastlands of North America than with Japan. He also describes things like Corn and Agave, which would have been alien to the Chinese. The French historian Joseph de Guignes in his 1761 article Le Fou-Sang des Chinois est-il l'Amerique? promoted this idea. Cartographers of the era, including Buache de Neuville, Zatta, Robert de Vaugondy, Louis Charles Desnos, and others, embraced the idea and it was included in many subsequent maps of the region.

In South America, the Laguna de Xarayes is illustrated here as the northern terminus, or source, of the Paraguay River. The Xarayes, a corruption of 'Xaraies' meaning 'Masters of the River', were an indigenous people occupying what are today parts of Brazil's Matte Grosso and the Pantanal. When Spanish and Portuguese explorers first navigated up the Paraguay River, as always in search of El Dorado, they encountered the vast Pantanal flood plain at the height of its annual inundation. Understandably misinterpreting the flood plain as a gigantic inland sea, they named it after the local inhabitants, the Xaraies. The Laguna de los Xarayes almost immediately began to appear on early maps of the region and, at the same time, to take on a legendary quality. Later missionaries and chroniclers, particularly Díaz de Guzman, imagined an island in this lake and curiously identified it as 'Island of Paradise,'

This map was first published in Paris by Louis Charles Desnos in 1760. The present example is the second edition - unchanged from the first save for the lower left imprint, which include the new date 1761. We are aware of editions published in 1781 and 1874. Surviving examples are scarce and wall maps from this period typically exhibit extreme condition issues, none of which are apparent here. The OCLC notes only a single institutional holding, at the Library of Congress. We are aware of one other, the 1784 edition, that sold privately.

Very good - especially for a wall map of this period. Laid on original linen backing. Some creasing and wear. Minor soiling.