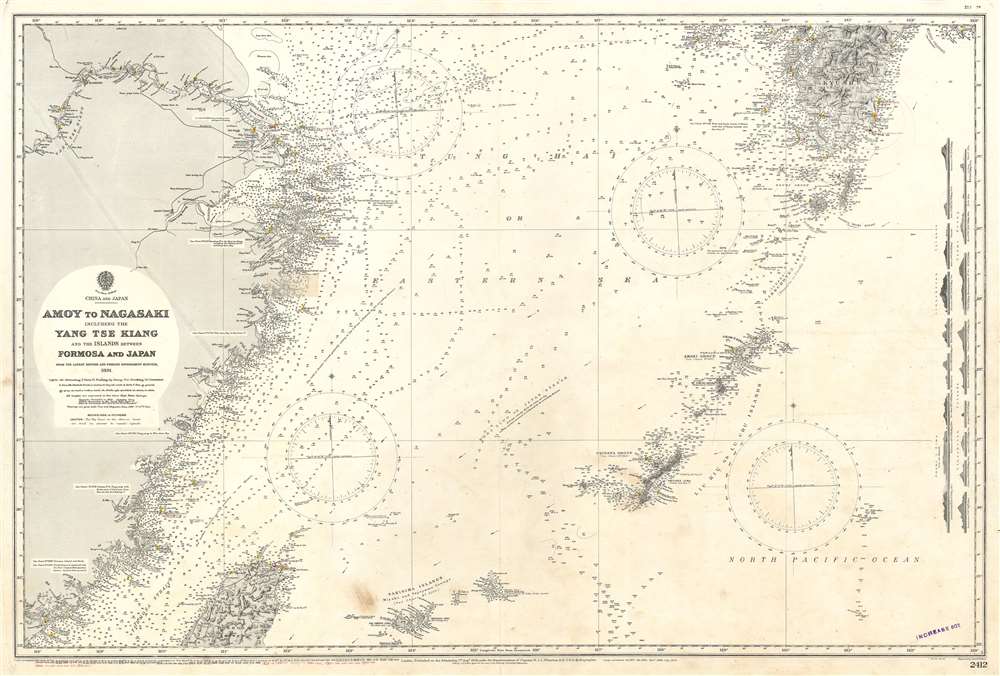 A detailed Admiralty chart focusing on the coastlines and the islands.

This is a 1926 British Admiralty nautical chart or maritime map of the East China Sea. The map depicts the region from Nanking (Nanjing) and Shanghai, China to Kyushu and from Nagasaki, Japan to Taiwan / Formosa. Highly detailed, myriad depth soundings are indicated throughout, with the highest concentrations along the Chinese and Japanese coastlines, in the Formosa Strait, and encircling the numerous islands between Kyushu and Taiwan. Depth soundings are also present along high-traffic shipping routes, and along the Yangtze River past Nanjing. Innumerable cities, towns, and villages are labeled throughout, including Shanghai, Hangzhou, Nanjing, Nagasaki, and Kagoshima. Extreme detail is paid to the Okinawa Group, the Amami Groupand the Linschoten Islands, three island groups between Kyushu, the southernmost of the Home Islands of Japan, and Taiwan.

Numerous manuscript notations are present on this chart and are done in red ink. The creator of these notations traced their addition to the chart in much the same fashion as the Admiralty traced its small corrections, giving the year (manuscript additions were made in 1928, 1929, 1930, 1931, 1932, 1933, and 1934), and location of the change. A highly detailed paste-down, situated near Ningbo, appears to have been printed in the same style as the rest of the chart.

This chart was engraved by Edward Weller and published by the British Admiralty in 1926. The first edition of the chart was published by the Admiralty on August 1, 1891, with what appears to be dozens of small and large corrections undertaken for the editions published in the intervening years. Three records for the 1891 edition of this chart appear in the OCLC, but no institutional holdings are cited in any of them. A fourth record for the 1915 edition of this chart appears in the OCLC as well, with one institution cited as holding it in their collection.