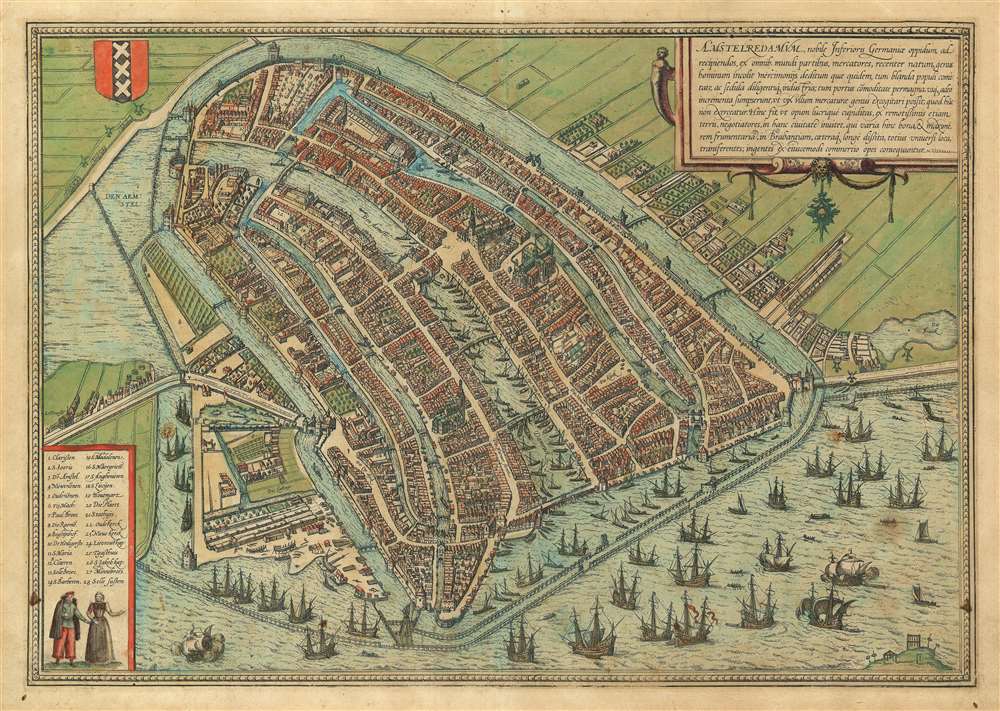 An attractive first edition old color example of George Braun and Franz Hogenberg's 1572 city view and map of Amsterdam. The map, presented in bird's-eye view form, looks on Dutch Golden Age Amsterdam from the northeast. On the left side the map illustrates the elaborate damming and redirection of the Amstel River into Amsterdam's famous canal network. Ships line the canals and fill the Zuiderzee both on the inside and outside of Amsterdam's defensive seawall - suggestive of Amsterdam's enormous commercial prosperity. At center, the old town hall (Stadhuis, 21) and the neighboring Nieue Kerk (23), are recognizable. In the lower right, at the edge of the map, is the gallows field with a total of 11 unfortunates.

Amsterdam is a well-known city in Lower Germany that has arisen in recent times to accommodate merchants and is inhabited by people engaged in trade. It is almost impossible to think of a commercial activity that is not practiced here. Hence profit seeking businessmen are drawn to this city from the most far-away lands and transport various goods, first and foremost grain, to Brabant and other parts of the world. Vast riches result from trade of this kind.

This map was issued in the midst of the Dutch Golden Age. By the beginning of the 17th century, Holland had established itself as the European hub of trade and commerce. With fair laws, an excellent port, and far-flung trading interests, Amsterdam was by far the wealthiest city in Europe. Merchants, intellectuals, artists, and nobility flocked to Amsterdam from throughout Europe, bringing with them a flowering of art, culture, cartography, and sciences. From 1570 to 1640, the population of Amsterdam nearly quintupled, from roughly 30,000 to 140,000.

This map first appeared in 1572 and is based upon a 1544 woodcut by Cornelis Anthonisz. There are two known editions, both very similar. The second edition features Hogenberg's privilege, a kind of early copyright, at bottom center. The present example, first edition, does not have a privilege.

Good. Even toning. Old color. Latin text and some older reinforcement on verso.