1814 Covens and Mortier Plan and Map of Amsterdam 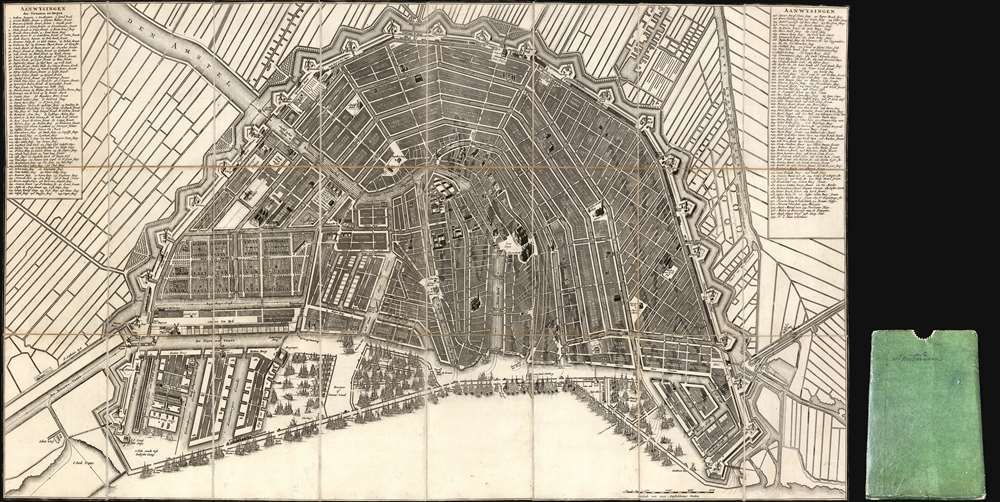 1814 Covens and Mortier Plan and Map of Amsterdam

This is the final 1814 Covens and Mortier issue of this large, beautifully engraved Nicolas Visscher II map of the city of Amsterdam. It was originally entitled Plan de la Grande et Fameuse Ville Marchande d'Amsterdam / Plan van de Wyd Vermaarde en Beroemde Koop Stad Amsterdam but in this state of the plan, the increasingly unfashionable cartouche has been removed, along with the title the plan had borne for a near a century. The plan was initially compiled by architect Daniel Stalpaert. It was printed by Nicolas Visscher, and was notable as one of the earliest depictions of the iconic ring canals, added to the city in the first half of the seventeenth century. The plan is oriented to the south-south west, in order to display the vibrant port, teeming with ships. It is a magnificently detailed work, with nearly three hundred streets named and numbered. Particularly famous or important structures are illustrated pictorially, as are the windmills build around the city to operate the canal system.

Close inspection reveals more changes than the simple removal of the cartouche. There are numerous name changes in the street lists, and many place names are changed or added on the plan itself. The 'Kostverlooren Vaart' canal is named here, along with the 'Vat nu de Overtoom' canal connecting the larger, outer canal to the city's internal network. Neither of these are named on earlier states. Also, in addition to their notation in the lists, various streets (such as the Harlemmer Strait, and the Harlemmer Dyk and the Vinke Straat) have their names added directly to the plan.

The map was first engraved in 1715 by Nicolas Visscher II, but remained in print well after his death. His widow Elizabeth eventually sold the plates to Covens and Mortier, who re-engraved and modernized it. The present example is the 6th state of the plan. Holdings of this map are poorly catalogued. We see thirteen examples in its various states in OCLC. One example of this final state appears in Harvard's collection, dated 1780 and is erroneously identified as a proof state - likely an assumption based upon the absent title.

Claes Jansz Visscher (1587 - 1652) established the Visscher family publishing firm, which were prominent Dutch map publishers for nearly a century. The Visscher cartographic story beings with Claes Jansz Visscher who established the firm in Amsterdam near the offices of Pieter van den Keer and Jadocus Hondius. Many hypothesize that Visscher may have been one of Hondius's pupils and, under examination, this seems logical. The first Visscher maps appear around 1620 and include numerous individual maps as well as an atlas compiled of maps by various cartographers including Visscher himself. Upon the death of Claes, the firm fell into the hands of his son Nicholas Visscher I (1618 - 1679), who in 1677 received a privilege to publish from the States of Holland and West Friesland. The firm would in turn be passed on to his son, Nicholas Visscher II (1649 - 1702). Visscher II applied for his own privilege, receiving it in 1682. Most of the maps bearing the Visscher imprint were produced by these two men. Many Visscher maps also bear the imprint Piscator (a Latinized version of Visscher) and often feature the image of an elderly fisherman - an allusion to the family name. Upon the death of Nicholas Visscher II, the business was carried on by the widowed Elizabeth Verseyl Visscher (16?? - 1726). After her death, the firm and all of its plates was liquidated to Peter Schenk. Learn More...

Very good. Dissected and mounted on linen as issued, with original slipcase.