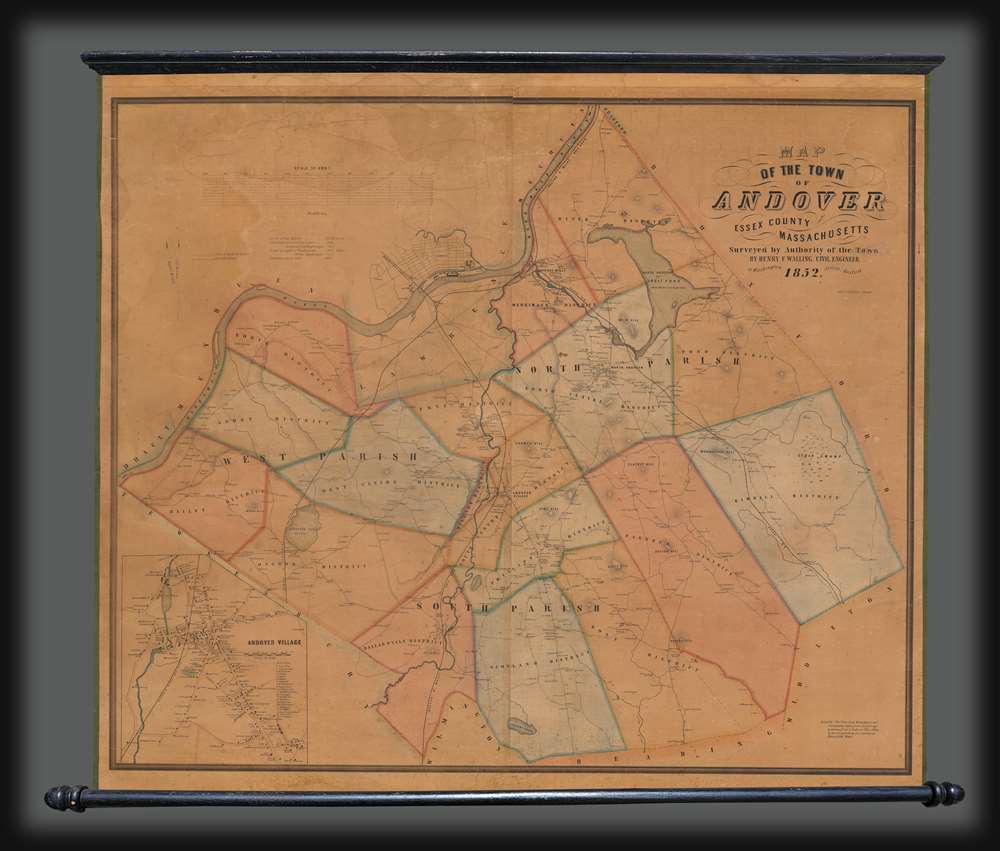 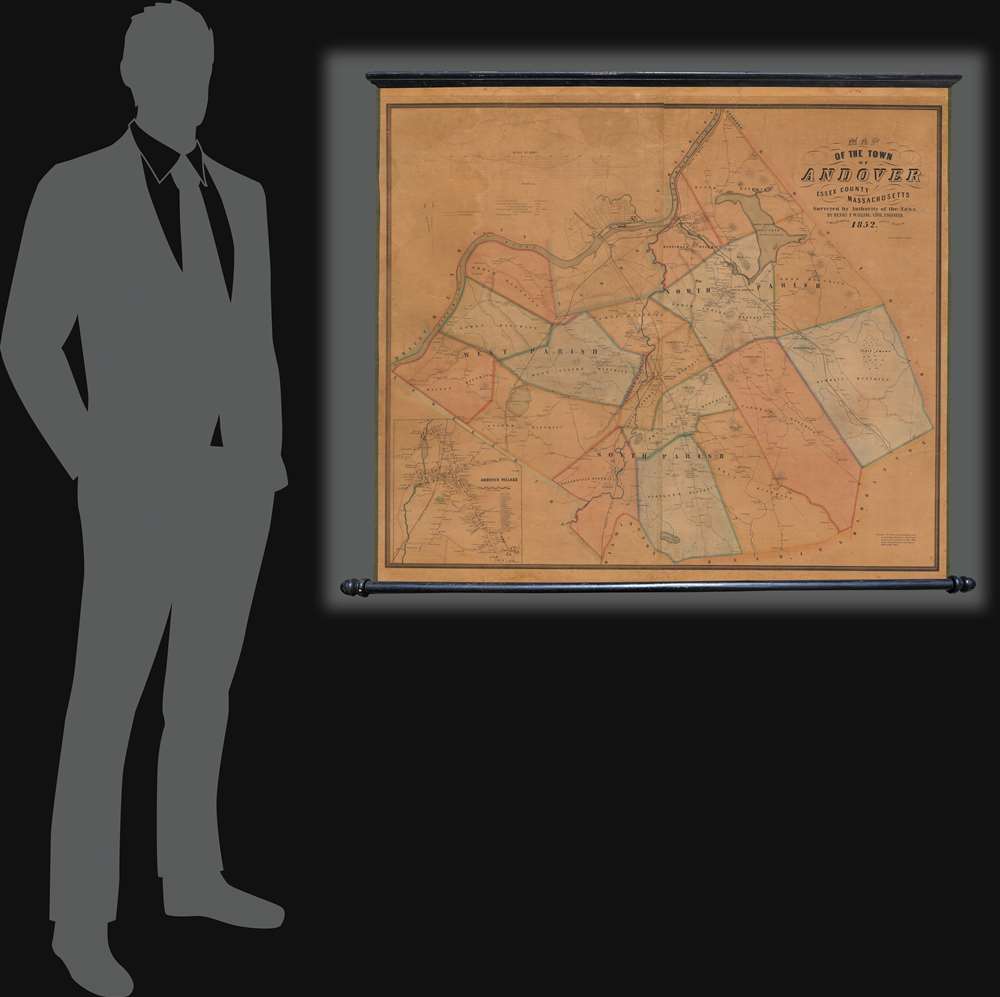 This is a scarce 1852 Henry F. Walling wall map of the towns of Andover and North Andover, Massachusetts. Like most Walling town maps, the cartographer has taken great pains to identify the homes of individual families and landowners, as well as important roads, rail lines, municipal buildings, and businesses. Walling sold his maps by subscription, often going door to door, so the presence of individual property owners was doubtless intended as an enticement to buyers. Both Phillips Andover Academy and the Andover Theological Seminary are identified in the inset in the lower left.

Phillips Academy was founded in 1778, during the American Revolutionary War, by Samuel Phillips, marking it as the oldest incorporated secondary school in the United States. For a time, the school shared its campus with the Andover Theological Seminary (founded in 1807), pictured below. In 1973, Phillips Andover merged with the Abbott Female Seminary to become a co-educational academy. Today, Phillips Andover remains a prestigious secondary school with a roll of distinguished alumni that include both George Bush presidents, Frederick Law Olmsted, Humphrey Bogart, and Edgar Rice Burroughs, among many others. The current location of Phillips Academy is identified here as such just south of 'Andover Theological Seminary' in the village map inset.

Established in 1807, Andover Theological is the first and thus the oldest theological seminary founded in the United States. When it was founded, it shared a campus with Phillips Andover (founded 1778) but later separated. The Congregationalist seminary emerged out of the Unitarian Controversy, a split between liberal and orthodox Calvinists at Harvard. Harvard embraced the more liberal point of view, leading to the founding of Andover for 'Old Calvinists'. The seminary merged with Newton Theological in 1965 and operates today as the Andover Newton Seminary at Yale Divinity School.

This map was created and published by Henry F. Walling in 1852 and lithographed by Augustus Kollner. We note seven examples cataloged in OCLC which are part of the collections at the New York Public Library, Harvard University, the Boston Athenaeum, the State Library of Massachusetts, the Peabody Essex Museum, the Osher Map Library at the University of Southern Maine, and the University of Virginia. There is no record of how many examples of this map were produced, but today it is quite rare.

Henry Francis Walling (June 11, 1825 - April 8, 1889) was an American civil engineer, cartographer, surveyor, and map publisher active from the middle to late 19th century. Walling was born in Providence, Rhode Island. He studied / worked at the Providence Athenaeum before discovering a talent for mathematics and surveying. Walling took a position with Samuel Barrett Cushing (1846 - 1888), a Providence based civil engineer with whom he issued in 1846 a revision of James Steven's Topographical Map of the State of Rhode-Island. Walling established himself independently around 1850 and immediately began preparing a series of town plans focusing on Bristol County, near Providence. Buoyed by popular interest in his plans, Walling expanded his operations to Massachusetts where, by 1857, he had produced no less than 50 town plans. Apparently Walling's business model involved a contract with town officials to produce a certain number of maps after which he acquired the right to print and sell additional copies on his own account. This work eventually led to Walling's appointment as Massachusetts "Superintendent of the State Map", a designation that begins appearing on his maps around 1855. While Walling's work focused heavily on city and county maps, he did successfully publish three scarce state maps: Maine, Vermont, and Rhode Island. In 1856 Walling relocated his headquarters to New York City where he had better access to quality lithographers. The Civil War (1862 - 1865) proved difficult for Walling and diminished sales may have forced him into a partnership with Ormando W. Gray, with whom he published numerous state, county, and national atlases in the 1860s and 1870s. Around 1880 Walling took a post with the U.S. Coast Survey with whom he worked on various charts until requesting a transfer in 1883 to the newly formed U.S. Geological Survey. Walling remained with the Geological Survey until his untimely death of a heart attack in April of 1889. Learn More...

Very good. Full professional restoration. Accompanied by original rollers which add four inches to the height and five inches to the width.