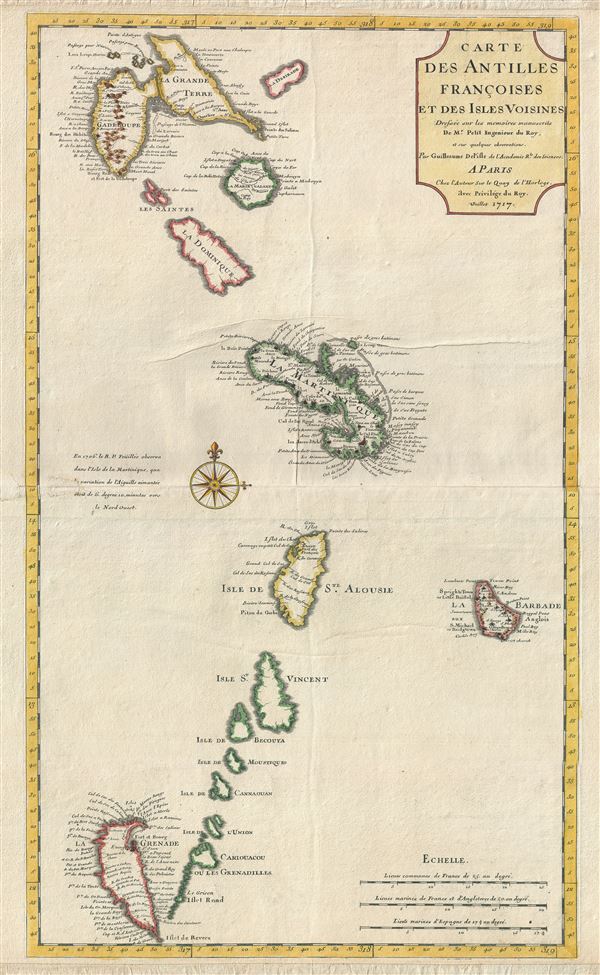 Scarce first edition of a very influential map of the Windward Isles.

A scarce and influential 1717 first state first edition map of the Lesser Antilles, West Indies, by Guillaume Delisle. This map covers the predominately French portion of the West Indies from Guadeloupe to Grenada, including the Grenadines, St. Vincent, Dominica, St. Lucia (Alouise), Barbados, Martinique, and Marie-Galante, among others. As the title cartouche suggests, Delisle cartographically derived this map almost exclusively from a manuscript produced by Thimothee Peitit, 'Arpenteur Jure de la Martinique' (Royal Surveyor of Martinique). Petit had the challenging task of reconciling local surveys of various islands with the general geography of the West Indies. Delisle copied from Petit's manuscript almost verbatim, a fact that is poignantly illustrated in the erroneous positioning of Grenada, which is both upside-down and situated to the west, rather than to the south, of the lower Grenadines. On Petit's part, this error has been attributed to simply running out of paper combined with an attempt to show the French Antilles within the greater continuity of the Windward Isles. For Delisle this was a major and uncharacteristic misstep that earned considerable critique in scientific and cartographic circles. Nonetheless, this map proved both popular and influential, being slavishly copied extensively by other cartographers of the period, including Ottens, Weigel, Chatelain, and Covens and Mortier, among others. Grenada's faulty positioning would not be seriously addressed until the 1760 Dezauche reissue, where it was corrected by Philippe Buache. This is the scarce first edition, first state of this influential map, identifiable by the lack of the honorific 'Premier Geograph du Roy,' which appears below Delisle's name in subsequent editions. Delisle's of the French Antilles was issued both independently and in various composite atlases throughout the 18th century. While the many maps inspired by this first edition frequently appear on the market, especially the later Covens and Mortier issue, this first edition is exceptionally rare and is priced accordingly.

Map Collector's Circle, 33, no. 54.
Looking for a high-resolution scan of this?