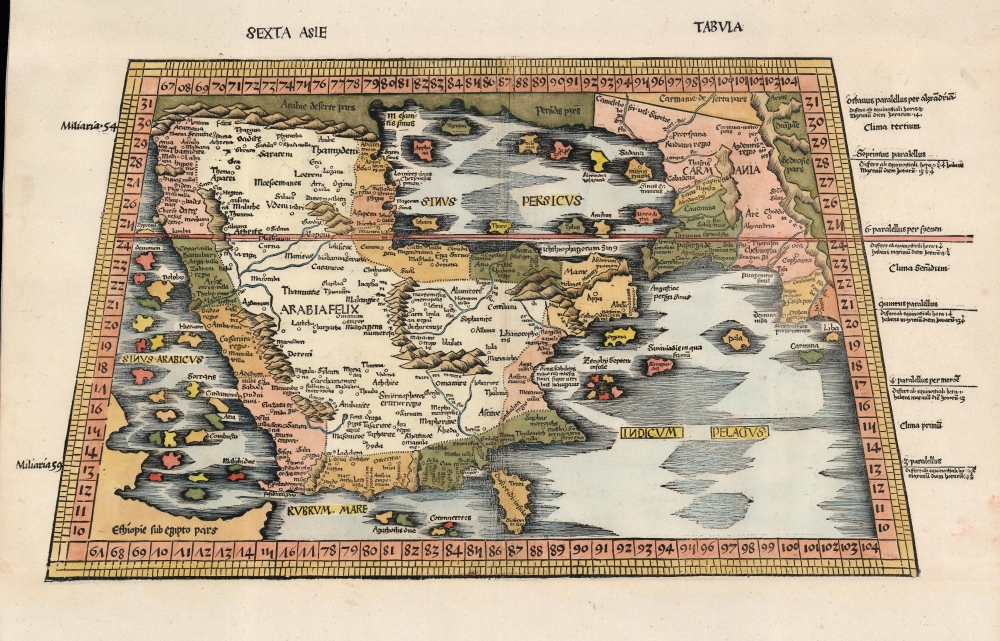 This is the Waldseemüller / Ringmann 1513 map of Arabia, considered one of the earliest acquirable maps of the Arabian Peninsula and essential to any serious Arabia collection. It was issued for Waldseemüller and Ringmann's 1513 Geographie Opus Novissima, at that time the most thoroughly edited and amended edition of Ptolemy. Moreover, this map was the most detailed map of the Arabian Peninsula to have been produced to date, illustrating and naming many of the islands of the Red Sea and the Persian Gulf, and including comprehensive interior detail.

Coverage extends from the Red Sea and the Horn of Africa to Persia, fully embracing the Arabian Peninsula and the Persian Gulf. As demonstrated here, contemporary European knowledge of the Arabian Peninsula, a legacy of Arab scholarship, was quite advanced. Cartographically, this map can be traced to the c. 1320 Venetian manuscript maps of Sanuto and Vesconte, as updated in 1482 by Nicholaus Germanus. Here, the outline of Arabia is recognizable, even if the surrounding islands are exaggerated. The map exhibits significant distortion - Ptolemy's judgment of distances became less accurate further from the Mediterranean, and as these distances were estimated largely on travel times, it is not surprising that the Arabian desert posed unique challenges. The toponymy reflects second-century Alexandrian scholarship: the explosion of Islam, and the concurrent importance of Mecca, Medina, and other places, occurred hundreds of years later. Nevertheless, Waldseemüller's map represented the cartographic standard for Arabia in the first half of the sixteenth century.

This map appeared in the 1513 edition of Claudius Ptolemy's Geographia, whose translation and maps were the collaboration of Martin Waldseemüller and Matthias Ringmann, best known for their 1507 world map, Universalis Cosmographia. Starting with the maps printed in the 1482 Ulm Ptolemy, Waldseemüller and Ringmann consulted a variety of Greek and Latin sources in order to produce an authoritative, corrected edition of the classical proto-atlas. In addition to the twenty-seven maps based strictly on Ptolemy's data, it included twenty Tabulae Modernae. Among these maps are the first printed maps to focus on regions unknown to Ptolemy such as North America and southern Africa, but they also include maps of areas covered in Ptolemaic geography but with new topography and toponymy based on contemporaneous information, such as the maps of Lorraine and the upper Rhine (which Waldseemüller probably surveyed himself) and a map of Crete. Ironically, Waldseemüller's name did not appear in the published book, as he and Ringmann had had a falling out by 1513.

This map was drawn between 1507 and 1513 by Martin Waldseemüller at the Gymnasium Vosagense, an association of humanist scholars formed in Saint-Dié under the patronage of the Duke of Lorraine. The map was included in the Gymnasium's 'Geographie Opus Novissima Traductione e Graecorum Archetypis, printed in 1513 by Johannes Schott (Strasbourg). Schott published a single further edition of the book in 1520; there were no alterations to the blocks. Our research reveals two cataloged examples of the separate map - one dated 1513 and one dated 1520, both in the Universitatsbibliothek Eichstatt. Rare to the private market.

Very good. Remargined at top and bottom with no loss to map area. Title in upper margin reinstated in facsimile. The color is properly reactive to blacklight, suggesting some age, but it was likely refreshed when remargined.