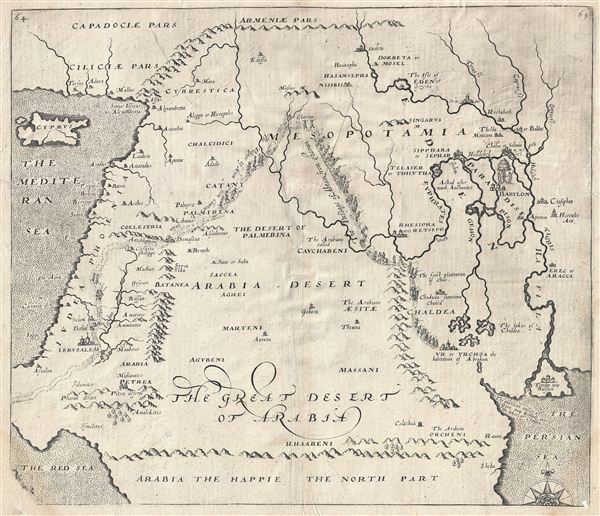 A fine example of William Hole's 1614 map of the Middle East issued for Sir Walter Raleigh's Historie of the World. The map covers from the Mediterranean and Cyprus to the Persian Gulf and from the Red Sea to Cappadocia. Hole engraved this map with his typical flair, identifying various Biblical and Historical regions throughout. Arabia he curiously identifies as 'Arabia the Happie,' a term most likely taken out of context from Plutarch who described it as 'Arabia, the happy garden of the world.' The map identifies the Home of Abraham at Vrocha (Chaldea), the first plantation of Chus, Babylon, Jerusalem the Garden of Eden, the City of Petra (then known to European only in legend), and the route taken by Abraham into Egypt.

Walter Raleigh (1554 - October 28, 1618) was an English aristocrat, writer, poet, soldier, courtier, spy, and explorer. A true renaissance man, Raleigh can be said to have embodied the optimism, energy, and possibilities of the Elizabethan era. His impact on global history is difficult to overestimate and too significant to describe here. Among other things, Raleigh popularized Tobacco in Europe, was instrumental in the English colonization of North America (Roanoke), and stoked the legend of "El Dorado". Raleigh's legendary act of laying down his cape such that Queen Elizabeth did not have to walk through mud has made him a byword for renaissance Chivalry. Throughout his life Raleigh fell into and out of Royal favor. His last falling out, over Raleigh's reckless attack on the Spanish fort of San Tome on the Orinoco River, lead to the vindictive Spanish ambassador insisting that King James carry out Raleigh's death sentence. Apparently Raleigh's last words were to the headsman, "Strike, man strike!" Learn More...


William Hole (fl. c. 1601 - 1624) was an English map engraver and metal worker active in the 17th century. Little is known of Hole's life. He may have apprenticed with William Rogers, taught Francis Baker, and was definitely a member of the Goldmsith's Company. He held the posts of "Head Sculptor of the Iron for Money in the Tower and Elsewhere for Life" and was "Graver of the Kings Seals, Ensigns and Arms". Hole's known corpus of maps is small but distinctive. According to the historian Arthur M. Hind,

The Work of William Hole has a peculiar fascination for its individual character, somewhat French in piquant flavour, and for its relation to various poets, writers and musicians, with whom one can image he lived in familiarity.

Very good. Some edge wear and edge reinforcement, else clean. Minor buckling.
Looking for a high-resolution scan of this?