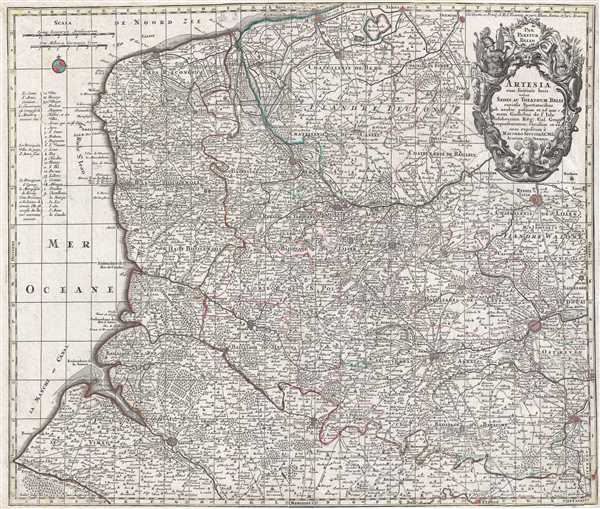 This spectacular old color 1760 Matthäus Seutter map of Artois (Artesia) in northern France. The map covers a large portion of northern France and notes the cities of Dunkerque (Dunkerke), Ypres, Lille (Ryssel Lille), Lens (which is home to the newest branch of the Louvre museum), and Arras, to name a few. The map also labels the Pas de Calais. This map was published by Matthäus Seutter in Augsburg and derived from an earlier map by the French cartographer Guillaume de l'Isle.

Artois and the modern region of the Nord-Pas-de-Calais were the epicenter of many of the wars between the English and the French during the 17th century, although during this time warfare was not exclusively between the English and the French. Artois was conquered by France during the Thirty Years' War and French sovereignty over the region was established in 1659. The wars continued until the early 18th century. The fact that Artesia/Artois had been a theater of war is directly referenced in the map's title Sedes Ac Theatrum Belli, roughly translated from Latin, means 'seat of the theater of war.'

Bound into various composite atlases in the eighteenth century.