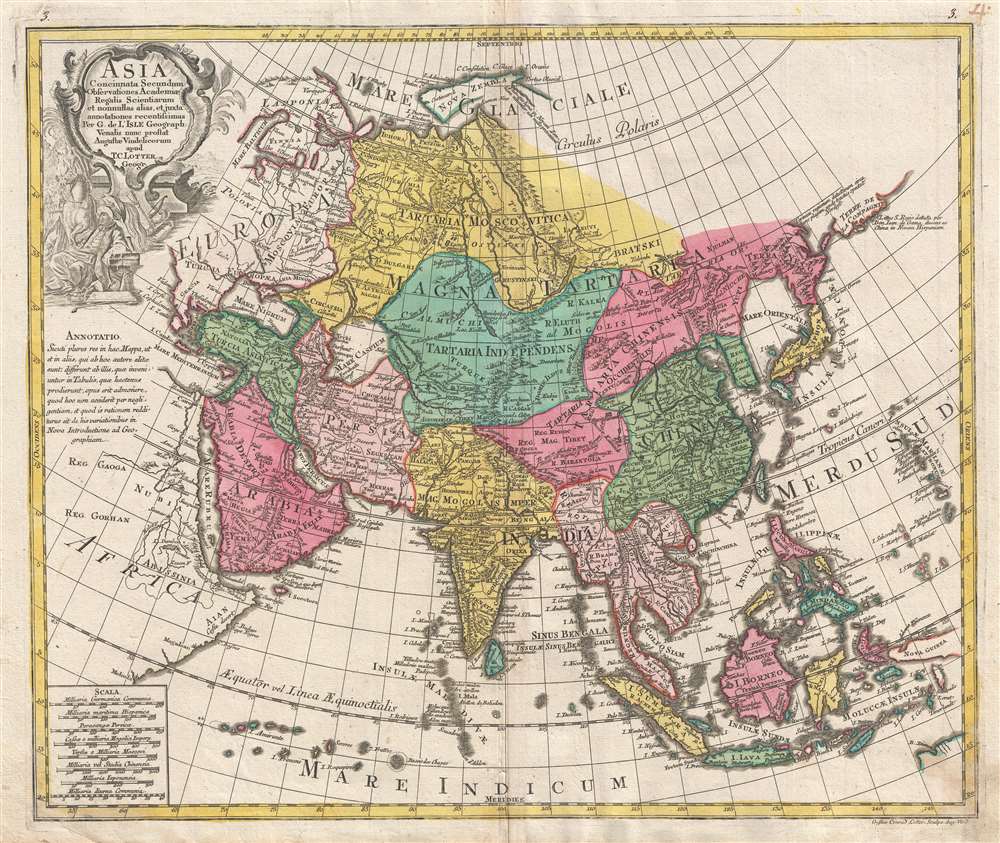 A rare and attractive old color 1770 map of Asia by Tobias Conrad Lotter. Centered on Independent Tartary, this map covers the entire continent from Africa and the Mediterranean east to the Bering Sea and south as far as Java and New Guinea. The map renders the entire region in detail offering both topographical and political information with forests and mountains beautifully rendered in profile.

While published by Lotter, the cartography is that of Guillaume De L'Isle, as noted in the title cartouche. The presentation is most interesting in its rendering of the largely unexplored extreme northeast of Asia. Knowledge of this area was, at the time, speculative at best. Hokkaido, or as it is mapped here, Eso or Yesso, is joined to Sakhalin and is connected to the mainland of Asia, reflecting a common misunderstanding about this region that persisted until the late 18th century.

An unusual large landmass outlined in orange that appears extending eastward towards America is labeled after João da Gama. This is a conflation of two separate but related legends/histories. The first refers to the discoveries of Portuguese explorer João da Gama (c. 1540 - after 1591), grandson of Vasco de Gama, who reputedly crossed the North Pacific in the 1580s, in the process mapping some of the Kuril Islands, possibly some of the Aleutians, and potentially even part of the American Coast. Gama supposedly also discovered islands rich in gold and silver, which led to subsequent expeditions by the Dutch explorers Maarten Gerritszoon Vries (1589 - 1657) and Cornelis Janszoon Coen.

Searching for da Gama's islands, Vries and Coen skirted the eastern coast of Japan and Hokkaido (then known as Yedo or Yeco) sighting the Japanese Kuril Islands of Kunashir and Iturup. They sailed fully around Kunashir, but only sighted the western shore of the larger Iturup before claiming both islands for the Dutch East India Company (VOC) and naming them Compagnies Landt. Cartographers began combining Gama with Compagnies Landt as a vast singular body of land stretching all the way to America. While based upon actual sightings of the Aleutian and Kuril Islands, limited exploration led explorers to believe they were seeing not a chain of small islands, but rather a part of an expansive mainland. These conclusions would be mirrored later in the 18th century by sophisticated cartographers like Gerhard Friedrich Müller, who rendered the area as a great peninsula, until the dogged and meticulous mapping of Captain James Cook finally shed scientific light on the region.

This map was engraved by Lotter's son, Gustav Conrad (1746-1776), and published in Augsburg in 1770. It was included with Lotters Atlas Novus Sive Tabulae Geographicae.