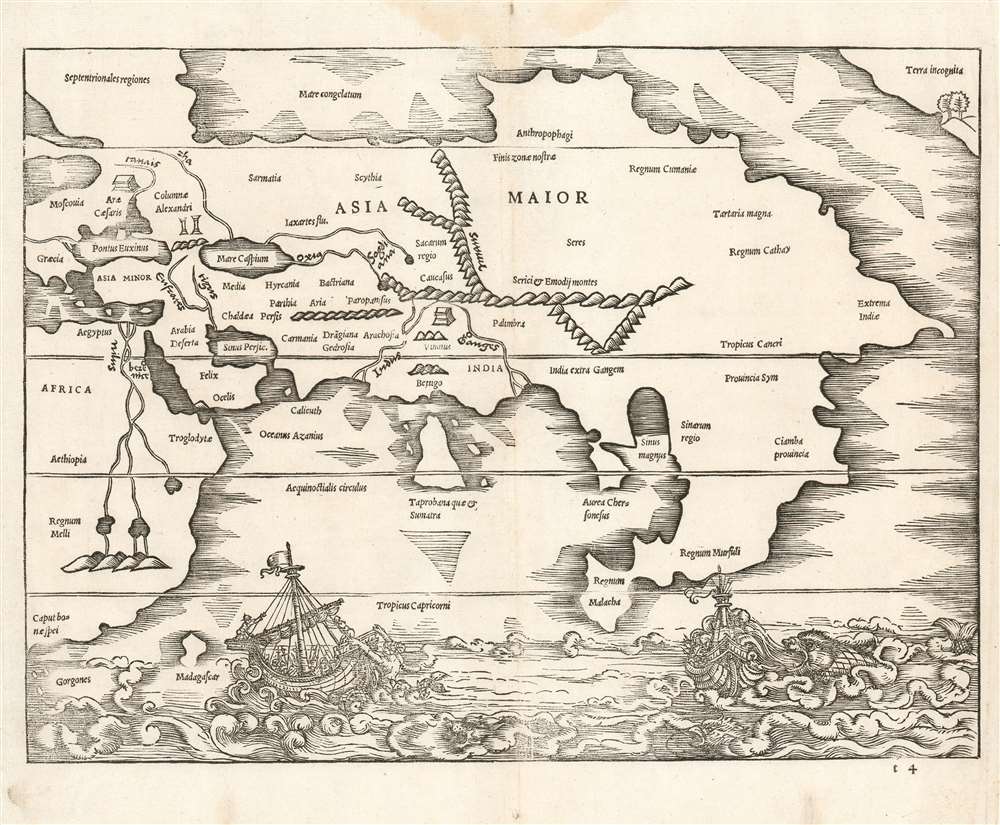 The first printed map of the Pacific Northwest.

This is a rare 1538 map of Asia, executed by Sebastian Münster for inclusion in his edition of Solinus' Polyhistor. It predates by two years the map of Asia in Münster's 1540Geographia. Although it is not entirely a modern work, it is the earliest printed map focusing on the continent of Asia. It also contains the first printed representation of the Pacific Northwest, more than thirty years prior to the Ortelius map generally granted that laurel.

The map is boldly and legibly presented, but in the waters south of the Indian Ocean the artist has outdone himself. The restrained hachure along the coastline gives way to roiling waves suggestive of wind-whipped seas, and two superbly realized sailing ships are menaced by sea monsters, one of them a merman gripping the gunwales. The detail of these - including crewmen desperately hanging in the rigging - is remarkable. It is tempting to compare the work on this map to the 1532 Münster/ Grynaeus (see below) whose decorative work is credited to Hans Holbein the Younger - but there is no definitive indication of the artist here.

The general outline of the map is derived from the 1502 Cantino Planisphere, a Portuguese portolan secreted from Lisbon and then made available to Italian and German scholars. It was this map that informed much of Waldseemüller's mapmaking (in particular his 1507 world map) and it was largely Waldseemüller who informed Münster's early work. Münster's 1532 world map accompanying Simon Grynaeus' Novus Orbis Regionum was itself a restatement of Waldseemüller, perhaps via the intermediary of Apian's 1520 world map. The outline of the present map closely resembles that of the corresponding area on the 1532 Münster / Grynaeus. (Similarities in the typography of these two maps should dispel any questions of their deriving from different mapmakers.)

Late 15th and early 16th century geography in many areas radically moved beyond Ptolemaic assumptions, but in other areas made more gradual shifts. One of the notable features of early world maps based on Ptolemy, is that the Indian Ocean was shown to be an inland sea, with the southern part of Africa shown continuing eastward to meet, beyond the Malay peninsula, with China. The body of water between the Malay Peninsula and this encircling landmass Ptolemy termed the Sinus Magnus (the Great Bay.) By the time the Portuguese makers of the Cantino Planisphere were at work, they well understood that such a 'land bridge' between Africa and China did not exist (Portuguese navigation had proven this point) but there was as yet no exploratory evidence to indicate what precisely was beyond the legendary Sinus Magnus. The solution offered on the Cantino, and by Henry Martellus in his 1490 map, was to truncate the 'land bridge' at a point some distance south of India-beyond-the-Ganges. What remained, then, of the land mass once thought to enclose the Indian Ocean would be a massive, inward-curving peninsula - sometimes referred to as the Dragon’s Tail. (This writer prefers to term it 'Ptolemy's Appendix.') This feature graces the Münster/ Grynaeus of 1532, and it is prominent on the present map.

Marco Polo and the Far East

While the general framework of the interior part of the continent is derived from Ptolemy, the place names occupying points beyond the Imaus Mountains and the Ganges derive from Marco Polo's letters - not only Cathay, but the southern realms of Champa (Ciamba here.) Japan does not appear here: another sign of this map's lineage with the Münster / Grynaeus, in which Marco Polo's Zipangri appears quite close to North America, and far from the Chinese coast.

The northeastern corner of this map is occupied by a spot of land, decorated with hills and trees and dubbed Terra Incognita. This does not appear on the 1532 map, or indeed on any other until Ortelius' 1570 map of Tartaria. In the text preceding the present map, Münster made the astonishing claim of this pictured coast that 'In our days it has been explored by men', despite no report of any such exploration having survived to our era.

Africa and the Indian Ocean

A significant portion of the African continent appears here - a necessity, for illustrating the navigability of the Indian Ocean (after all, the Dragon's Tail was the appendix left over from the land bridge thought to connect Africa and China; if the Dragon's Tail illustrated the eastern extent of the land bridge, the Cape of Good Hope showed its western extreme. Madagascar, is also shown and named, though far from the mainland. The interior topography shows Ptolemy's depiction of the River Nile as presented on the 1532 map. Although the Indian Peninsula is all but omitted, the Indus and Ganges are clearly shown and labeled. The island of Taprobana, although placed in the general vicinity of Sri Lanka, is here explicitly identified as Sumatra. The Malay Peninsula appears, named Aurea Chesonesus.

Barring those above-mentioned, modern geographical features, portions of the map west of the Sinus Magnus show physical features and their names in accord with those of Ptolemy. The names of nations, and people, however, are consistent with those appearing in Solinus' text - a sensible choice, indicating that with this map Münster was applying his best available topography specifically in order to illustrate and clarify the work in which the map was to appear.

This map was first issued in the 1538 edition of Solinus' Polyhistor, which was published by Petri but for which Münster also supplied the text and presumably the transcription of the 3rd century work. A 1543 edition was also printed including this map: the two editions are easily distinguished by the presence of the catch-letters 't 4' in the lower right-hand corner of the 1538. About thirty examples of this edition of Polyhistor are catalogued in institutional collections, with some 23 of the 1543 edition. We see no separate, physical examples of this map catalogued in OCLC.