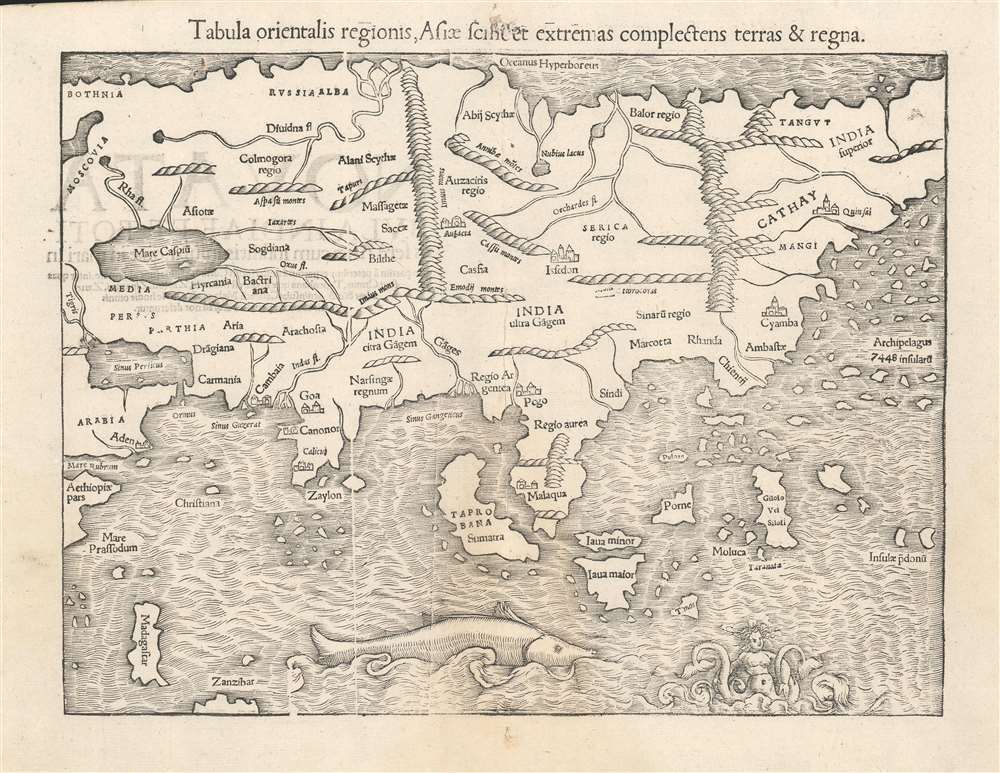 This is a c. 1552 strike of Sebastian Münster's 1540 map of Asia, the first printed map of that continent based on contemporary data, and the earliest obtainable map of the continent overall. The map depicts the Asian continent from the Caspian Sea and the Persian Gulf to the Pacific Ocean, and from the Arctic Ocean to the Indian Ocean. Although the interior detail is based heavily on Ptolemy, Münster also blends in information gleaned from recent discoveries by Portuguese traders and adventurers, including Vasco da Gama (c. 1460 - 1624). Both the Portuguese outposts of Goa and Calicut, on the Indian subcontinent, are labeled, and the depiction of India is improved, moving closer to a truly accurate depiction, although still undersized. The inclusion of Sri Lanka (Zaylon) as an island is also an improvement; Münster applies Ptolemy's historical name for Sri Lanka - Taprobana - to Sumatra, which is placed correctly to the west of the Malay peninsula.

Southeast Asia and the East Indies

The Portuguese trading post of Malaqua in Southeast Asia is also present. Münster's depiction of Southeast Asia is recognizable, and surprisingly rich in novel information. Java - consistent with Marco Polo - is split in two, illustrated here as Java Major and Java Minor, and Münster retains Marco Polo's assertion of a vast archipelago in the Pacific made up of 7,448 islands. Münster's depiction of China (Cathay) is also consistent with Marco Polo's writings. At the northwestern angle of the Malay Peninsula, 'Pegu' can be found - the kingdom of the region now known as Myanmar. This first appeared on a printed map with the 1516 Martin Waldseemüller Carta Marina, which is how it would have come to Münster's attention. Drawing on Magellan's Voyage (1519 - 1522), he includes the Pacific 'Thieves' Islands' of Guam and Rota, here named 'Insular pdonū', a corrupted from Ladrones. Borneo appears as Porne. Predated only by Oronce Fine's world map, this map is the earliest to show any specific island of the Philippines: Palawan, here named Puloan. Likewise, this map gave its readers their first glimpse of the Spice Islands of the Moluccas and Gilolo. Although Münster extends Asia beyond the eastern limits of the page, his map of the Western Hemisphere would make clear that he intended to illustrate Asia and America as separate continents - as indeed his map of the world of the same era indicates.

Asia in a Navigable World

This map was introduced in the first 1540 edition of Münster's Geographia. It remained in each edition of that work, and was included in all editions of Münster's Cosmographia until 1578, after which the double-page maps of the long-lived work were replaced and updated. This specific example does not match precisely with any of the examples of the map we have examined, but it corresponds most closely to 1550 and 1552 issues of the map, suggesting that the typesetting was altered during the course of one of those two print runs. The separate map appears frequently in OCLC in its various editions.

Münster, Sebastian, Cosmographia, (Petri: Basel) 1578.     The Cosmographia Universalis, one of the greatest geographical and historical works of the 16th century, 'taught nearly three generations of laymen most of what they knew about the world beyond their native places' (Strauss). Filled with maps, views, and rich descriptions of places throughout Europe and beyond, it was the best general source of geographical information until the advent of Ortelius' Theatrum. It was first issued by Sebastian Munster (1488 - 1552) in its 1544 German edition, and stayed in print long after its author's death in thirty five editions, and in five languages. (Of these, the 1550 and 1552 editions are widely regarded as the most complete and truest to the author's intentions: thereafter, later editors continued to add to the work's text; editions from 1588 onwards employed an entirely different set of maps produced on Ortelius' model.) Munster's goal, initially, was to rally his homeland's humanists and scholars to produce a new map of Germany in order to 'see what kind of a land our ancestors conquered for their home... bring honor to our country and place its beauties in the clear light of day.' Munster's project quickly expanded to cover the known world in its scope to produce a 'sufficiently large volume, in which I touch upon the foundation of all nations and kingdoms, their peculiarities, rivers, mountains, customs of men, royal successions, origins of the more important cities, succinct histories, religions, characteristics and fertility of lands... in Germany, however, I tarry a little longer.'.